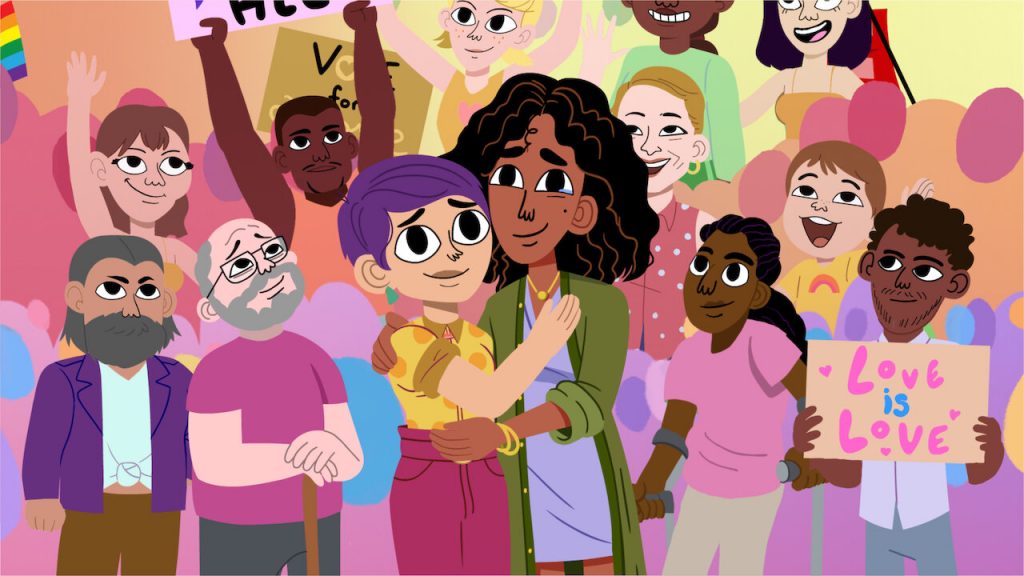 How do you create a catchy music video about the Bill of Rights? The source material isn’t the most ear-wormy stuff, with its guidelines on due process and its prohibitions against excessive bail.

“There’s a lot of information to get through,” conceded Trisha Gum, the director given the assignment. “And some of the amendments take a little longer to describe than the others.”

But it can be done. Start with writers who know their way around an expository song — say, Kristen Anderson-Lopez and Robert Lopez, the composers behind “Frozen” — and give the resulting tune, an anthemic power ballad titled “These Are Your Rights,” to the pop belter Adam Lambert.

Add exploding history textbooks, animated battles, a scene in which George III has his crown knocked off, and voilà: A centuries-old document springs to glorious life.

The music video is part of “We the People,” a 10-episode series of animated civics lessons created by Chris Nee, the Emmy-winning creator of the children’s show “Doc McStuffins.” Premiering on Netflix on July 4, the series of shorts, which run from four to five minutes long, feature songs performed by Janelle Monáe, Daveed Diggs, Bebe Rexha, Brandi Carlile, and others, and animation from top directors like Peter Ramsey (“Spider-Man: Into the Spider-Verse”) and Daron Nefcy (“Star vs. the Forces of Evil”).

Aside from trying not to put young viewers to sleep, another big challenge when teaching young adults about the rights and duties of citizenship loomed: addressing topics like the Second Amendment and same-sex marriage in completely nonpartisan ways, at a time in this country when just about everything is partisan.

“The entire project was about finding ways to talk about things that have become very partisan and not take sides,” Nee said. “With the Second Amendment, we made sure that both sides were represented and that the images of both sides were onscreen for the exact same amount of time.”

The series was born at a dinner party in Los Angeles in November 2018, where Nee, a self-described “civics geek,” approached the producer Norman Lear about doing a series of civics-related music videos.

“He has an actual copy of the Declaration of Independence, so I knew this was something he cared about,” she said. The producer Kenya Barris (“black-ish”) was at the same party and, like Nee, had recently started working at Netflix.

Nee suggested doing something like “Schoolhouse Rock!,” the classic 1970s series that taught young viewers about how grammar works (“Conjunction Junction”) and how bills became laws (“I’m Just a Bill”). But this time, it would be with music you could play on the radio, or in a club — “a thing about civics that teenagers would actually click on,” as Nee recently described it.

Nee invited Barack and Michelle Obama, who have their own Netflix deal, to join her, Barris and others as executive producers. (Lear had no official involvement, but he is thanked in the credits.) It was the former president’s suggestion to raise the age of the target audience to kids aged 14 to 18 — those crucial years, the producers felt, when teens either choose to become politically active or become jaded and disengaged.

The call went out to directors and musicians. For the leadoff episode, Nee reached out to the Grammy-winning R&B singer H.E.R., who co-wrote “Change,” a smooth soul number encouraging “active citizenship.” Ramsey was asked to direct the episode, which features a young Black woman helping out in a soup line, joining protests and registering new voters.

“This was early 2020, and what happened later confirmed that what we were making really reflected where we are now,” Ramsey said. “You had George Floyd, the Black Lives Matter protests, the ‘crazy in a good way’ drive to get more voters registered that ended up flipping the Senate. You could see a whole generation of people waking up to this idea of participation in civic life.”

Soon after, the artist Mabel Ye got a call to direct an episode about the First Amendment featuring “Speak Your Mind,” a song written and sung by Carlile. A 20-year-old former CalArts student at the time, Ye wasn’t that much older than the project’s target audience.

“I went to high school not long ago, and we learned about civics in government,” she recalled. “I thought it was fascinating, but I don’t remember a lot of people being very interested.”

As a singer, songwriter, and animator, Ye has produced animated videos featuring her own music (“Beautiful Brain”), so the idea of creating one for Carlile was intriguing.

“We were pretty separate in terms of collaborating,” Ye said; as is often the case with animation, she worked with a finished track. “But I’m weirdly flattered that she’ll watch the short and know that I exist, me being a fan of her work for a while.”

Lin-Manuel Miranda chose the topic “The Three Branches of Government,” writing a song with Lopez and Anderson-Lopez that imagines a government more diverse than the real one, pitting a Black female president, the two houses of Congress, and a levitating, multicultural Supreme Court against one another in a rap battle for the ages. (One sample: “Every state elects two of us”/ “We’re proportionately population-based, there’s a slew of us.”)

Not every subject seemed quite so elevated at first glance. The rapper Cordae was picked to write a song about taxes, a topic Nee figured would be a tough sell to the other producers — let alone to the artists. “But Cordae came in and said: ‘No, I get that topic. I feel it personally,’” Nee said. He came back with a song that mentions growing up on food stamps and in Section 8 housing “because of taxes we pay.”

“I realize how important taxes are in our understanding economics,” Cordae explained in an email. In the video, directed by Victoria Vincent, a house cat who seems to know a lot about the U.S. tax system breaks down where your money goes and explains why everyone needs to pay a fair share — “Little homey, you better pay your tax” is the song’s eminently hummable chorus. (Asked what he would say to people who didn’t pay their taxes, however, he joked: “Let me know how you did it!”)

Liz Kleinrock, a Washington, D.C.-based teacher and consultant, whose book “Start Here, Start Now” focuses on anti-bias and antiracism in education, said that she would definitely use the videos in her classrooms, in part because of their focus on everyday efforts like those of the young woman in “Change.”

“When we teach about activists and change makers, we tend to hold up people like Rosa Parks and Martin Luther King,” Kleinrock said. “And when you’re working with kids, they think, ‘Yes, they’re amazing, but I could never be like that.’ These videos show lots of different ways to be an active citizen so that kids are able to see themselves in them.”

The 10 videos cover a broad range of topics, but the directors said they would welcome a chance to do even more. Gum wanted to work on an episode continuing the theme of active citizenship, while Ye could see herself tackling one about City Council elections. Ramsey said he would love to direct something about municipal water policy, or maybe gerrymandering.

As deep in the civics weeds as some of these potential future topics go, Nee ultimately wants the videos to be inspiring, she said, first and foremost.

“I think this is a hard time to be awakening into your civic self if you’re 15 or 16 and looking at how the political process has gone over the last couple of years,” she said. “It’s easy to decide there’s no point in being engaged. But I hope that people take away a feeling that these issues are worth knowing and worth engaging in.”