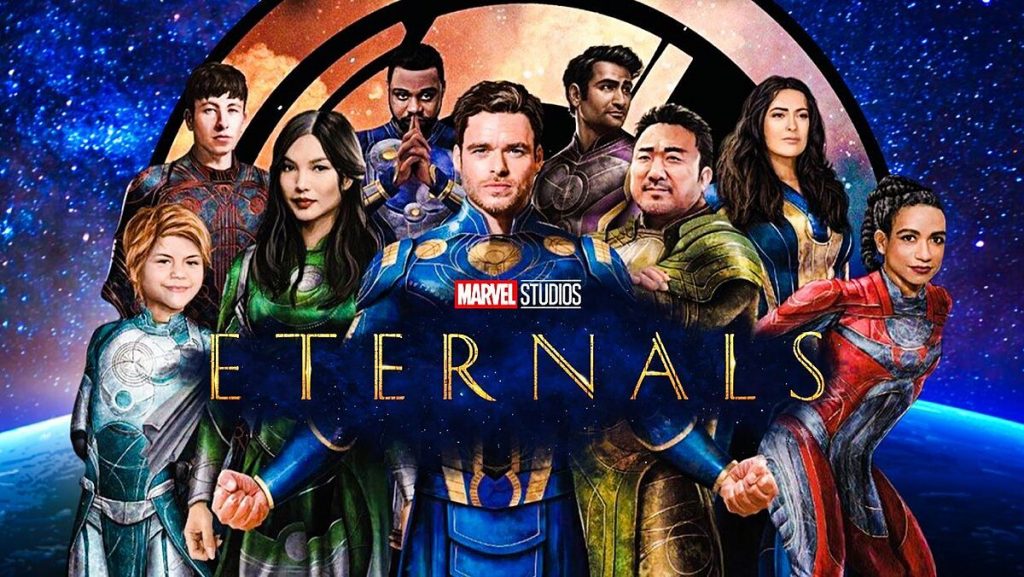 It was probably unrealistic to expect Chloé Zhao, independent film’s foremost spiritual chronicler of the American West and an Oscar winner for Nomadland, to completely reinvent the superhero movie. Nevertheless, Eternals does bend the ubiquitous fantasy genre to some degree to fit the director’s customary vein of humanistic intimacy measured against an expansive natural-world canvas. The attention to character, group dynamics and emotional texture makes the film often feel more alive in its quieter moments than its fairly routine CG action clashes. But the depth of feeling helps counter the choppy storytelling in this new tangent in the MCU narrative.

New, of course, is a relative term given the amount of cross-referencing that’s now a requirement of most Marvel movies and TV series. While the Eternals — defenders of Earth from a faraway planet who have lived among humanity for millennia — are a fresh crew, they drop repeated references about the chaos wrought by Thanos when he erased half of all life across the universe (in Avengers: Infinity War) and question who will lead the Avengers moving forward. Some overlap seems inevitable.

Two post-credits teaser scenes reportedly hinting at the direction of future installments were chopped off the end of the film’s first New York press screening. (Thanks for the trust, Disney.) But word leaked from the Los Angeles premiere the same day about one in particular, which had fans hyperventilating in rage or excitement — or both — about the casting of a pop culture heartthrob as the junior sibling of an MCU supervillain.

Further clues for Marvel Comics aficionados as to how ongoing plotlines will develop come from the name of seemingly human bystander Dane Whitman (Kit Harington), who drops vague hints in the final scene that there’s more to him than meets the eye.

In a first taste of the movie’s tendency to dump exposition by the bucketload, an opening crawl traces the Eternals back to the dawn of time, when the immortal beings from the planet Olympia were sent to Earth by the Celestials to protect humanity and civilization against marauding alien apex predators known as Deviants. Those dragon-like monsters are first seen emerging at startling speed from the waters of Mesopotamia in 5000 B.C., attacking a prehistoric tribe with their massive jaws and lance-like tendrils, until the Eternals swoop in to save them.

Jumping ahead to the present day, we learn that the Deviant threat was defeated centuries earlier. The Eternals disbanded their once-tightknit family and went their separate ways, some integrating harmoniously with humans, some seeking solitude or pairing off in isolation, and others chafing at the rules that prevent them from using their powers to intervene in mankind’s conflicts.

One of the most content of the Eternals to live among humans is Sersi (Gemma Chan), an ancient artifacts specialist at London’s Natural History Museum, who keeps her co-worker boyfriend, Dane, in the dark about the transmutation powers that enable her to convert matter by touch. She also serves as a surrogate big sister to Sprite (Lia McHugh), a 7,000-year-old storyteller with the power to conjure illusions, unhappily trapped in the body of a preteen punkette.

Part of Sersi’s resistance to taking her romance with Dane to the next level seems to be due to an on-off history with Ikaris (Richard Madden) that spans centuries. A fighter endowed with the power of flight and eyes that shoot destroyer beams, Ikaris appears conveniently just as a global earthquake reawakens the Deviants. Emerging out of the canal at Camden Lock, the monsters this time appear to be directly targeting Eternals, not humans, their lethality magnified by a newfound ability to heal themselves.

The script by Zhao, Patrick Burleigh, Ryan Firpo and Kaz Firpo uses the comic introduced in 1976 by Jack Kirby only as a baseline, creating its own world imbued with a contemporary sensibility. There are a lot of lurching shifts, both geographical and temporal, before the band of 10 distinctly drawn Eternals and their respective powers come into focus, loosely split between fighters and thinkers.

The diversity of the principals that was already apparent in advance marketing is even more notable in the film itself. Not only do Black, Latina, and East and South Asian characters get to don the latex suits, but representation extends also to queer and deaf Eternals. Not to mention the witchy other-worldliness of Angelina Jolie. It’s to the credit of Zhao and her appealing ensemble that this mix actually feels organic to the story and not merely like woke pandering. It also fits with the key element lifted from Kirby, the Uni-Mind, which allows the Eternals to overcome their differences and consolidate their power into one mighty collective force.

The matriarch of the group is Ajak (Salma Hayek), a spiritual guide who’s been chilling, cowgirl-style, in the sleepy hills of South Dakota when the Deviant reemergence calls for the band to get back together. Ajak can generate a golden sphere that allows her to communicate directly with their Celestial maker, Arishem (voiced by David Kaye). But neither the origin story nor the details of their purpose on Earth have been truthfully conveyed to the Eternals, creating ambivalence from some about the mission that reunites them after centuries apart.

While the zigzagging convolutions of the storytelling can prove frustrating, particularly in the film’s lumpy first half, there’s plenty to keep you engaged in the mix of camaraderie, friction and rivalry among the bantering Eternals, who are not without vulnerabilities. The script finds humor and poignancy in the challenges of a group of soldiers forced to find their purpose in a mortal world that for the longest time has not required their special skills.

The most amusing comic relief comes from Kingo (Kumail Nanjiani), who can mold firebombs to hurl in battle with his bare hands but has spent the years becoming a one-man Bollywood dynasty. Working his eyebrows like the cheesiest of matinee idols, Nanjiani is clearly having a blast playing an endearingly vain character, trailed with fawning loyalty by his human valet and videographer, Karun (Harish Patel). The mentions of Kingo’s blockbuster Shadow Warrior screen franchise almost demand a spinoff series.

Others are more burdened by their cosmic gifts. Sullen Druig (Barry Keoghan) has retreated into the Amazonian jungle, embittered by humanity’s self-destructive nature and by the veto on him using his mind-control powers to end their cycle of violence. Makkari (Lauren Ridloff), a deaf speedster, is bored and restless with her exile on Earth. And techno-savant inventor Phastos (Brian Tyree Henry), troubled by the role his developments have played in human tragedy, has sought comfort in domestic stability. The matter-of-fact presentation of a loving gay family represents a breakthrough for Marvel.

Jolie’s Thena, a warrior able to generate and morph filigreed golden swords and spears at will, suffers from a form of dementia known as Mahd Wy’ry, a kind of memory overload that makes her a danger to her companions. That yields a touching bond with jovial strongman Gilgamesh (Don Lee), who signs on as her protector, keeping her away from harm in the Australian Outback. But the key relationship is in the romantic crossed wires of Ikaris, Sersi and Sprite, who stand in for Peter, Wendy and Tinkerbell in a Peter Pan scenario that eventually puts them on opposing sides of a divide.

Zhao seems more invested in this emotional interplay than the many battle scenes, which take place everywhere from the Aztec empire to the Amazon. The clashes are efficiently choreographed but somewhat rote, even if it’s a thrill to see relative elders like Jolie and Lee busting serious moves — the former with balletic grace, the latter like a brick wall in motion. The muted excitement of the fight scenes is perhaps due in part to the antagonists being interchangeable CG monsters, random creepy-crawly destroyers rather than the foot soldiers of a compelling villain.

That said, the Eternals’ ability to generate gold geometrical force fields and weaponry delivers some cool effects work, at times suggesting the intricate beauty of art nouveau draftsmanship with hints of M.C. Escher.

Overall, the film benefits enormously in terms of texture from the wide-ranging location work, with the majority of settings simulated in various parts of the U.K. and the Canary Islands. Those include the ancient civilizations of Mesopotamia, Babylon, Tenochtitlan and the Gupta Empire, impressively re-created by production designer Eve Stewart, as well as stops in modern-day London, Alaska, Mumbai and Australia, among others.

The visuals have an epic scope that renders the Eternals, for all their superhuman powers, inhabitants of a recognizable world, scarcely different from the mortals among whom they hide in plain sight. The action generally is staged against physically imposing settings without relying too much on greenscreen trickery, a choice validated by Ben Davis’ sweeping naturalistic cinematography, which gives the film a less synthetic look than the average MCU joint.

For those of us growing “mad weary” with superhero fatigue, there’s no escaping the usual drawbacks of a prolix run time, a dense overabundance of plot and the narrative limitations inherent in the formula. For all the millions of fans who keep the MCU industrial machine humming, there are millions more who just can’t get too worked up about folks in fancy athleisure wear facing off against mutant lobsters penciled in by digital animators.

But from the early image of Sersi emerging from a London Underground station at Piccadilly Circus to the dreamy strains of Pink Floyd’s “Time,” the soulfulness, the contemplative weight of Zhao’s vision at least puts this among the more interesting and original entries in the ever-expanding canon.