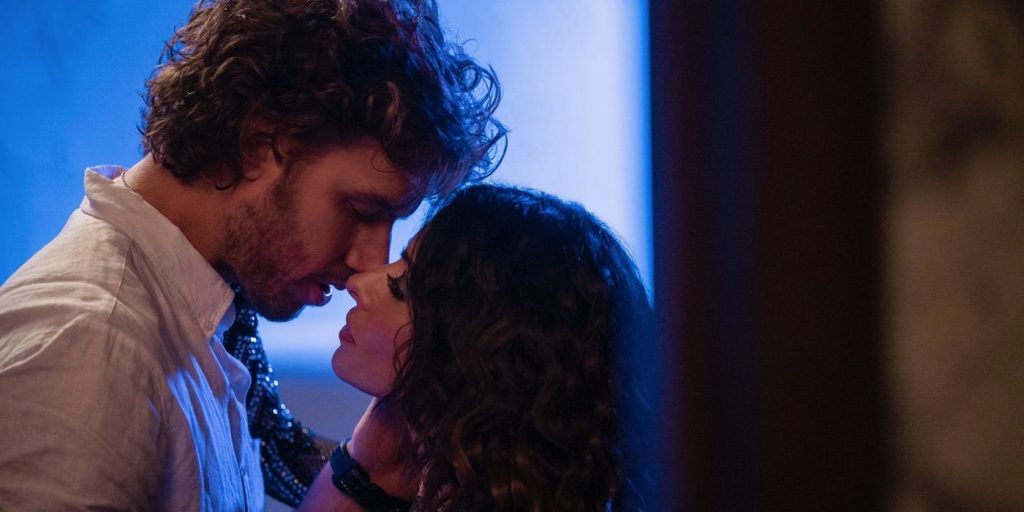 Life is littered with forks in the road. We make numerous choices each and every day, many of which have rippling effects for years to come. Have you ever wondered what would’ve happened had you made a different decision at some point in your past?

Inspired by BB Easton’s memoir “44 Chapters About 4 Men,” the new eight-episode Netflix  original series Sex/Life centers on one woman’s turmoil as she questions her life choices.

Premiering June 25, Sarah Shahi stars as Billie Connelly, a stay-at-home wife and mother-of-two living in the suburbs of Connecticut. All appears picture-perfect on the surface but she just can’t stop thinking about her past. She pours her heart out in a not-so-secret journal, which is on her laptop. Things go very wrong – or right depending on how you look at it – when her loving, loyal, reliable and gorgeous husband Cooper (Mike Vogel) finds her musings about the best sex she ever had in her life with her ex-boyfriend Brad (Adam Demos). This was the big heartbreak she never got over and the mystery of their breakup unravels in a mix of present day and flashbacks.

Billie cannot stop thinking about her wild-child days in New York City with her best friend Sasha (Margaret Odette) when both were man-swapping free-spirited young women with endless possibilities and countless nights out on the town. They worked hard pursuing their career dreams but played even harder.

Told with humor and heart, this series has that Sex and the City meets Sliding Doors vibe with a lot of 9 1/2 Weeks mixed in. Though it’s a fun ride, it also makes you stop and think about your own glory days.

Shahi, Odette and series creator Stacy Rukeyser each spoke with me about what it was like to tell this story of hot sex and true romance from the female gaze.

“I connected very much with the basic idea of a wife and mother who misses her single days and can’t help but wonder where that girl went,” said Rukeyser, who first read Easton’s book in 2018. “It was exciting for me to create a show that has this nostalgic version of the female sexual experience. I wanted to touch on the story of this woman remembering the best sex she’s ever had, which is so fun, but I wanted to do it in a way that was really empowering. This show isn’t framed around the kind of sex a man may like and whether or not a woman will agree to it. This is about her experience and she’s not objectified.”

Women, in particular, seem to be confronted with the age-old can-we-have-it-all question. “What this show is trying to say is that it’s ok to enjoy and express all sides of yourself,” explains Rukeyser. “We can be wives and mothers and also ravenous sex goddesses. It’s as if we’re supposed to enjoy sex when we’re young and then we’re supposed to leave that part of ourselves behind. It doesn’t make you a bad mom to say you adore your children and also miss that sexual, free part of yourself.”

For Shahi, a mother of three, this role was a dream come true. “Billie is dynamic. She has this large appetite for life. Playing someone so layered was a once-in-a-lifetime opportunity. The show touches on the deeply felt psychology of being in a marriage, having children and going through an identity crisis. As a wife and mother, you still want to be sexy, hot and desired. It’s quite liberating to be able to be everything.”

And, says Shahi, Billie’s story is an important one to tell. “After women get married and have children it’s like society tells us we have to put that part of ourselves behind us and those days are over! Billie really challenges that notion. Just because she’s a wife and mother, she still has those wants and desires. She still wants mystery and that adrenaline rush.”

When Odette first encountered the script her first thought was how intense and real the subject matter was. “I was really taken by the world and drawn like a moth to a flame to Sasha. I loved her energy and felt immediately connected to her. I had a really strong take on her. It was incredibly freeing to portray someone who is not only self-assured in her career but who is also in control of her body and her desires. In Hollywood, sex scenes are often for the delight of the male viewer but this was for women and the show isn’t apologizing for that.”

The show also spotlights the importance of female friendships. “It was important to me to show the strength of this relationship between Billie and Sasha which could never be torn apart by a man,” says Rukeyser.

Another point Rukeyser wanted to make was that a woman should never be shamed for her sexual past. “When Billie first met Cooper she shamed herself and made herself into a woman who she thinks is marriage-worthy. We aren’t supposed to admit to our sexual pasts but hiding such a huge part of herself creates a big problem in her marriage.”

As for that road not traveled, Shahi says this is something she talks about often with friends. “It’s such a natural question to ask and something I’ve wondered myself. Every person I know talks about this. It’s normal to wonder what might have been. At the end of the day, this show is about choices, identity, reflection and really knowing yourself, the good and the bad, and really owning the truth of who you are.”

So, can a woman have it all? “I want it all and I don’t want to settle,” answers Shahi. “Life is about knowing what you want and going for it. Maybe you can have it all but it will come with sacrifices.”