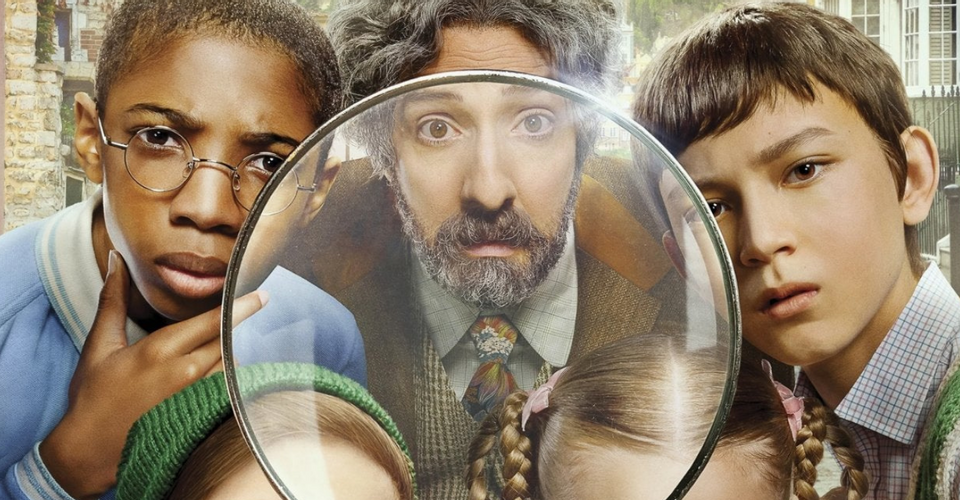 Prepare to be transported to the exciting and weirdly wonderful world ofThe Mysterious Benedict Society. Plagued by ‘The Emergency’, which no one can really identify what the emergency is, we enter this alternate reality through the citizens of Stonetown where worry and fear is plastered on everyone’s face.

Amidst the uncertainty a group of orphans, Reynie Muldoon, (Mystic Inscho), Kate Weatherall (Emmy DeOliveira), Sticky Washington (Seth Carr), and Constance Contraire (Marta Kessler), view ‘The Emergency’ as background noise of their lives. A chance to change their futures by passing obscure and ridiculous written tests to gain admission to a private school is when they learn about the truth of ‘The Emergency’. The tests were a recruitment tool to find the best group of kids for a special mission.

A mysterious man named Mr. Benedict (Tony Hale) has recruited them to his mansion to help stop ‘The Emergency’. Benedict proves that subliminal messages are being broadcast around the world causing the plight and that only children can stop the panic. The brilliant and eccentric Benedict has been discredited by the authorities, so he plans to use Reynie, Sticky, Kate, and Constance as his agents to infiltrate a prestigious school in town called the Learning Institute for the Very Enlightened because Benedict believes the messages are being broadcast from the school.

The children agree to the mission and enroll at the school. As they stroll the grounds of the institute they learn that this is a place without rules, but there are strict guidelines students must follow. They hear about the wondrous founder Mr. Curtain and when they finally meet him, the kids are astounded to see that he is the exact twin of Mr. Benedict.

The Mysterious Benedict Society is an adaptation of author Trenton Lee Stewart’s popular book series and as I sat down to watch the first two episodes of the series I was keenly interested in seeing how well the show would adapt the book. With opening vignettes introducing us to the main characters, I was pleasantly surprised to see how much the series follows the book. Reynie is our main character, who becomes the de facto leader of the group. His plight at the orphanage is important to see at the beginning, which enables the audience to empathize with Reynie and see the world through his eyes.

Wasting little time, the show brings us to the testing portions where we meet Sticky, Kate, and Number 2, played to perfection by Kristen Schaal. The eccentricities of her character alone reflect the altered nature of the world that The Mysterious Benedict Society occupies. She seems like a pushover, but Schaal is not only wickedly funny, but deceptive in her abilities.

The show echoes the feeling from the book that the world the story takes place in is different. Make no mistake, The Mysterious Benedict Society takes place in modern times, but the feel of the book is transferred to perfection in the series with the set designs, and the props. While it is present time, there is a hint of sci fi throwback to the 1950’s where advancement in technology is evident but the standard luxuries like television are big bulky blocks. Satellite television exists but rotary dial phones are being used.

As I watched these first two episodes, I was amazed at how familiar the world was, yet a few tricks with set design and prop choice can bend the reality of what is being seen. I accept the fact that this is modern time, and that some dastardly plan of subliminal messages could cause a panic, but at the same time I am in awe of how much the world looks the same but feels so different. It is akin to watching The Incredibles where there are superheroes saving the world, but the world looks like the 1950’s with components of modern times.

While the backdrop of the story is beautifully established, the success of the show relies on the performances of the four main actors – Mystic Inscho, Emmy DeOliveira, Seth Carr, and Marta Kessler. These four kids are the crux of the story and through their abilities to not only transfer the essence of the characters from the page to the screen, the four actors deserve so much credit for making the audience connect with these characters immediately.

Mystic Inscho has a difficult job in playing the lead because he must walk a fine line of playing an incredibly intelligent child navigating his own feelings while being the rock for the rest of the group. Inscho’s Reynie is the leader of the group, and it will take his intelligence and leadership to guide the group of four very different kids. Emmy DeOliveira, Seth Carr, and Marta Kessler are standouts in the roles of Kate, Sticky, and Constance. It’s easy to like them all and thanks to the talents of these four actors the audience will identify and root for their success immediately.

With a supporting cast of Kristen Schaal, Ryan Hurst as the bodyguard Milligan, and MaameYaa Boafo as Rhonda, the four kids are served well by these talented adult actors. Tony Hale has a difficult job playing the twin role of Benedict and Curtain. He not only subtly brings wisdom and guidance to the eccentric genius of Benedict but can show the malevolence of the ruthless Mr. Curtain with a sneer on his face.