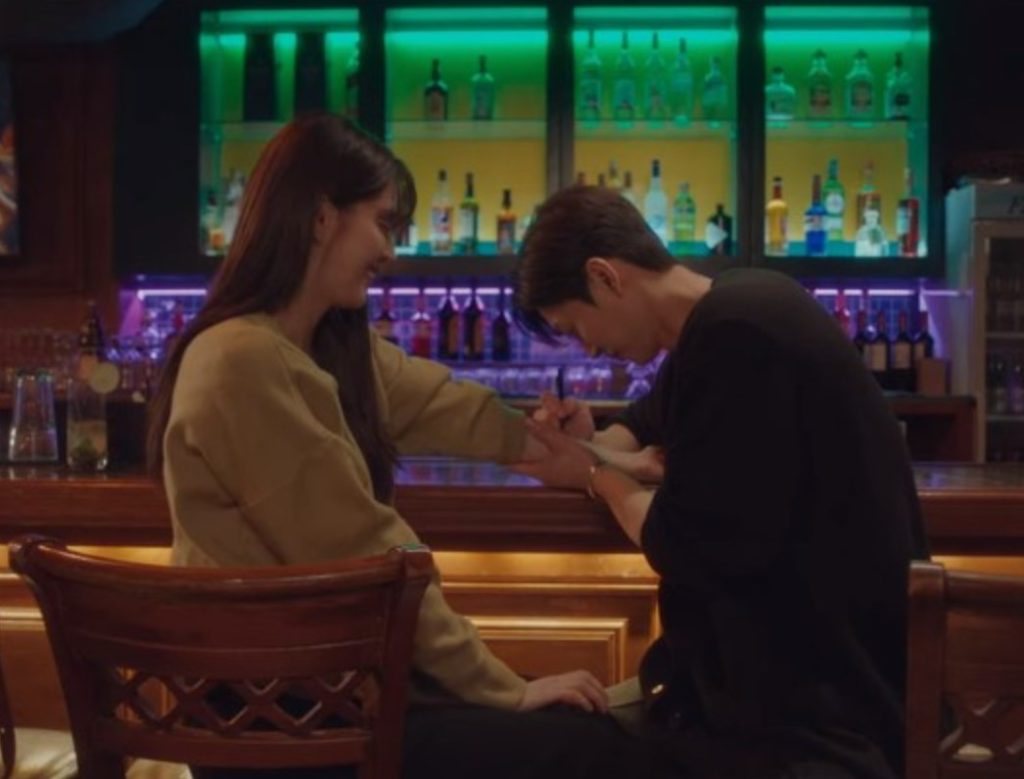 Netflix’s description for the series reads, “The intoxicating charm of a flirtatious art school classmate pulls a reluctant love cynic into a friends-with benefits relationship.”

Nevertheless episode 1 opens on a snowy night, with Yu Na-bi, our protagonist, walking down the road with flowers in her hand. She reaches an exhibition by Yu Hyeon-u called Metaphors of Dawn. She looks around at the beauty all around her and we see that the flowers contain a card that reads “I love you”. The scene is perfectly set and you absolutely feel in love just picture everything, similar to what Na-bi says.

Once inside, she sees a sculpture named after her which looks extremely sexual. Like, you’d feel awkward looking at it. Na-bi, obviously, is taken aback and runs away from the exhibition. We then get a flashback and get to know that Hyeon-u and Na-bi knew each other from an art academy, where he was her teacher. However, we also see that Hyeon-u was an abusive POS and controlled every aspect of her life. He used metaphors and deep meanings to excuse his horrible behaviour and Na-bi, having no idea about boundaries, went along with it.

After that, however, the final nail in the coffin was when Na-bi saw Hyeon-u cheating on her in Nevertheless episode 1. It’s something that the audience will be able to guess from the moment they see Hyeon-u, but well. Anyway, she broke up with him and that’s the day she realised that love just melts away in a heartbeat. I think the series does a great job at giving us this backstory to set up why Na-bi is the way that she is. Additionally, Nevertheless episode 1 does this in a very short amount of time, so kuods!

Anyway, we then get to that moment – the moment when the worlds of the two singles collide. It’s a miscommunication, but at that moment, everything seemed to stop for Na-bi. They both looked at each other and felt an immediate connection. Although the man was there to meet someone else, he cancels on her and sits beside Na-bi. Anyway, they play games and share stories about their lives. Their conversations seem to flow easily and they seem to be comfortable with each

In the present in Nevertheless episode 1, Na-bi still has visions of her ex cheating on her and then flashes back to her night with the mysterious man. In it, he asks her why she is named after a butterfly and, in turn, draws a butterfly on her arm. She talks about her mother and her aunt and why she is named after a butterfly. After an incident regarding smoking in the back alley, the mysterious stranger invites Na-bi to go see butterflies at his place.

She goes off to the bathroom and while coming back, overhears him speaking on the phone and telling someone that he misses them too. Without any context whatsoever, Na-bi thinks that that is his girlfriend or something, and runs away.

Back in the present, Na-bi goes to see a professor with fellow classmate Sol to talk about the possibilities of being a foreign exchange student in Paris. However, the professor totally undermines her because of her low grades and gives her list to Sol, who hasn’t made up her mind yet.

While Na-bi is sulking around and goes to get pencils, she sees her mysterious stranger again, walking off somewhere in Nevertheless episode 1. When she comes out of the store, however, she is unable to find him… Until at night, they come face to face with each other. As it turns out, he is the junior who wanted to go out with her from before. Na-bi is taken aback and once inside, he is formally introduced as Park Jae-eon.

They don’t let anyone know about how they actually met before in Nevertheless episode 1, however, it’s very cute to see them finally meet each other formally. As the whole squad has fun together, Na-bi thinks about how Jae-eon is so easy-going and fun to be around. Anyway, she still leaves after feeling annoyed when Jae-eon helps a waitress out. Outside, she decides to go back to work, but Jae-eon takes her to buy ice cream.

Later in Nevertheless episode 1, they discuss why Na-bi didn’t tell anyone about where they met and why she didn’t remove the butterfly drawing. On the other hand, we also see Sol getting to know someone after running into him and causing an accident.

At home, Na-bi wonders about her encounters with Jae-eon and gets butterflies in her stomach. That’s a big theme in this series, it seems, and it’s kinda cute. She finds out Jae-eon’s phone number from their group chat. He, on the other hand, goes off to meet someone after reaching home. Na-bi wonders why he hasn’t replied to the group chat yet and is confused thinking whether he has already fallen asleep.

The next day in Nevertheless episode 1, she is excited to visit their smoking area in hopes of catching a glimpse of Jae-eon. She doesn’t find him there and gets an earful from her professor for not completing her work and fiddling with her phone. Na-bi asks Bit-na whether everyone has sent her the money from last night. The latter informs her that everyone has, including Jae-eon, who has given her cash just now.

They later on go out to eat and Na-bi, still wanting to catch a glimpse of Jae-eon, goes off to where he’s working after giving an excuse in Nevertheless episode 1. There, she meets him but is left a bit annoyed with the way he makes her feel – like her ex. He comes to meet her at the studio and calls her insensitive for leaving him like that. She puts colour on his face and they share a sweet moment, trying to put colours on each other. Later, as Na-bi is working on her sculpture, Jae-eon sits in front of her, looking at her.

That night in Nevertheless episode 1, as Na-bi talks to Jae-eon more, she finds out his different sides and it seems like she likes what she sees. Jae-eon’s obsession, or liking, for butterflies is a bit odd though and makes me uncomfortable. But I guess it’s romantic? Jae-eon goes in for a kiss, and refusing at first, Na-bi seems to let him kiss her the second time around…

Nevertheless episode 1 starts the season off with some sizzling chemistry between the two leads and a sufficient backstory for one of the characters to make us understand what’s going on. The cinematography is brilliant and makes everything look very dreamy. Additionally, Song Kang’s character is sufficiently mysterious and good-looking to make fans fall for him over and over again. Lastly, the songs are really good and go well with the overall vibe of the show.