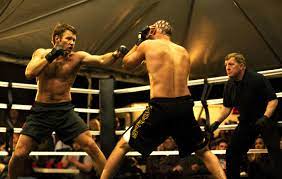 Overall I believe that I still have some more issues with this movie than the average person seems to have. This is one of the most loved movies of 2011 and also critically it received lots of praise. And yes, it deserves most of this but that doesn’t mean that I saw this movie as a perfect one.

Let me just start off with giving the reasons as to why I still think that this is a great movie. Despite being, in essence, just like any other sports movie, or a movie with an underdog type of story in it, this movie still manages to work out as something refreshing and original. It’s probably due to the very simple fact that instead of focusing on one main character and one underdog, it focuses on two. And not just two but brothers as well. It gives the story already a whole lot of depth and different dynamics between all of the main characters. It makes things all the more interesting by making the two characters almost total opposites of each other, even though they have the same blood running through their veins.

The movie also does a great job of not letting you root just for- or pick sides with just one of them. Both main characters have their good and bad sides but ultimately they are both fighting for a just cause. In the end it really shouldn’t matter to you who should win or loose the final fight, since you feel both will earn it to win.

And just like the audience will be torn and be having a hard time picking sides, with just one of the main characters, so is the Nick Nolte character, who is the father of the two. He pretty much is the glue of this movie that connects both story lines to each other, since the brothers themselves are not really on speaking terms. But by saying this I’m probably making it sound like he is a good father but hey, it’s Nick Nolte, so of course he’s playing a rotten and washed up character, that never has been much of a father for neither of his sons, mostly due to alcohol abuse in the past. But that doesn’t mean you can’t care for the character. On the contrary quite really. Perhaps it’s the most interesting and also most important character out of the entire movie. You can definitely understand why his sons want nothing to do with him but at the same time you also feel sorry for him and want him to make up for the things that happened in the past and you are hoping they all can be a happy family again, even though you know this is basically impossible to ever happen. Too much has happened in this family to accomplish that.

After so much praise, how can I still have some problems with this movie? Well, I actually still had plenty of them to be honest.

First of all the way the movie is build up. Sometimes the movie is too slow and sometimes things happen to fast. I don’t know, I was just taken out of the movie by it a couple of times. At times I wanted the movie to slow down so it could focus more on- and go deeper into certain subjects and at others it was sticking too much to its drama. The first half of the movie can basically be seen as the drama part of the movie, while the second half is focusing way more on the the fighting aspects but not without its emotional and dramatic impact though. As a matter of fact, the final fight has the biggest and most emotional impact of the entire movie.

Second of all, I actually though that the fight scenes got mostly poorly shot. What the movie was lacking were some good wide-shots at times, that could give you a better idea of what was going on exactly. Besides, it also was often way too short. I know MMA fights normally don’t last that long, due to its intensity but that perhaps should have meant they should had gone for another fight sport instead. Also often the build up to the fights was lacking a bit at times, as did the emotional impact of it on the characters outside of the ring, or cage in this case.

Another thing that I thought was seriously lacking was its musical score. Whatever went wrong with Mark Isham’s career. He once truly was a promising composer but his score for “Warrior” mostly annoyed me and often didn’t seemed to suit the movie at all.

But obviously all of this problems still couldn’t ruin the movie for me. Just thought I would share them with all of you, to also indicate that the movie is perhaps not as perfect as most people make it sound. It however still is a great movie of course and deserves to be seen by all!