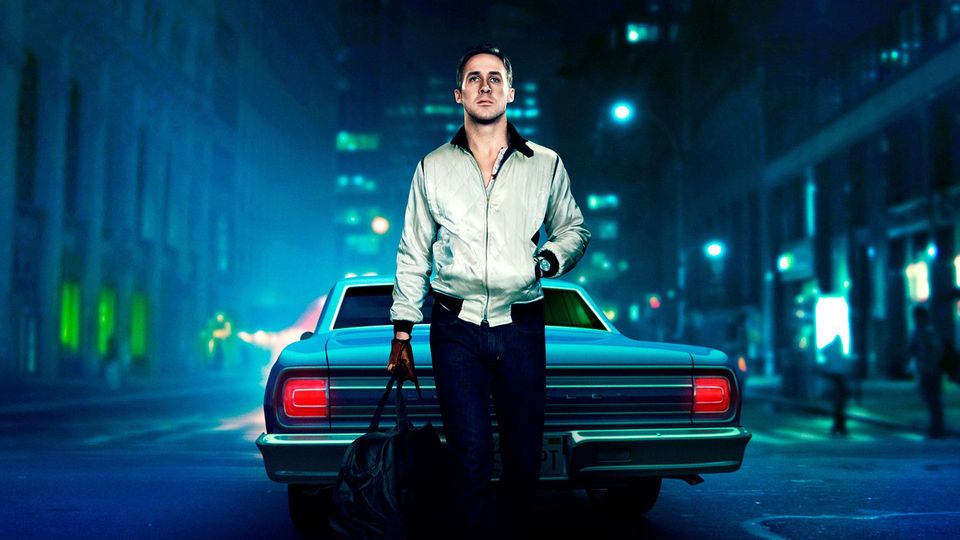 I watched The American recently and I wasn’t particularly taken by it. It tried to blend a standard thriller plot with a silent and arty reference to European cinema that just didn’t really work. This came into my mind while watching Drive because, not only does it have a reference to a film being potentially called European, but it also manages to deliver an effective thriller within the skin of a 1980’s modern crime noir skin. We join the action at the start where everything from the character’s jacket, the theme music and even the typography and colour of the credits sets us in one of these films and it is a style that really sets the tone for the film.

The style is important because a lot of the work is done there in terms of making this film what it is. The stripped down and silent delivery adds to the cool feel of the driving sequences but it also creates a stillness that translates really well into tension in the scenes where nothing happens, but something could happen. This becomes more obvious when the film becomes violent (and a couple of times it is very violent) because the realism of the situation is then always just beyond the stillness. The plot is fairly straightforward and could easily have been made as a direct-to-video crime movie with lots of shouting, lots of stunts and an ending where everything is tied up neatly. It is to the credit of the film that this very plot is turned into something that the majority of people would not have made.

The story held me because of the manner of delivery. The score put me right into the frame of mind for a neo-noir type crime thriller and it held me in this state for the duration. OK some of the music is a little over used (the “soft” music I have heard other places and it reminded me of them) but generally it is good. Refn’s direction is equally cold and stylish – he sits back off his subjects in the main, giving them room in the frame, again adding a lot of visual silence which still looks good. He is helped by having a great cast because, as this is about delivering in the construct, presence is important and you need people who can do work with less. Gosling is getting lots of praise but personally I wasn’t blown away – although he was good. He is cool and easy to like but brings out his darker side well (albeit rooted in kindess). Mulligan also does well because the two of them together convince of an affection that we have to buy into even though little is said. Cranston is a solid turn but perhaps suffers from now being too famous for his current TV role. Brooks and Perlman are both enjoyable tough and mean in different ways, their screen presence benefits their roles. Hendricks is in a small role but effective.

Drive is a great little film that gets by on its style and delivery to make for an engaging and cool film. I watched Transformers recently and didn’t like it for the same reason – it was all style and nothing of substance, so what is the difference? For me the difference is that with Drive the style informs the story and the characters, rather than just for the sake of it. Drive will not be to everyone’s tastes (go to the message board for tales of those expecting something like Fast & Furious) but it is an effective, engaging and stylish neo-noir that uses stillness and sudden violence really well.