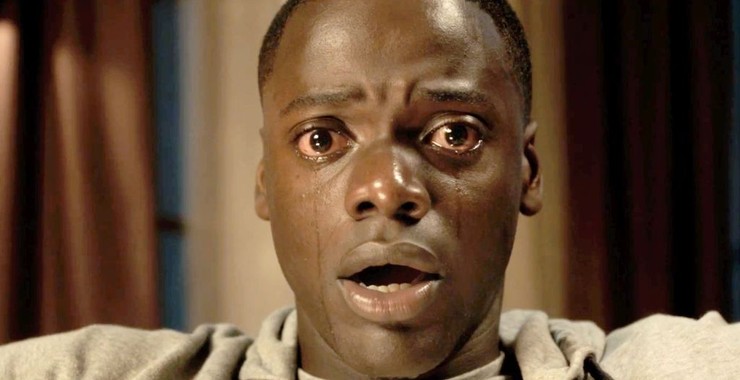 Chris (Daniel Kaluuya) is a successful black man whose girlfriend Rose (Allison Williams) is taking him to meet her parents for the firs time. Chris is worried that they’re going to be put off by him being black but Rose assures him that they’re not racist. At first Chris is welcomed by mom (Catherine Keener) and dad (Bradley Whitford) but soon he begins to realize that something isn’t quite right.

Jordan Peele wrote and directed this film, which pretty much came out of nowhere and became a huge hit with critics and it was an even bigger hit with crowds. I don’t think anyone would have guessed that this film would have made the amount of money that it eventually did but it’s refreshing to see. GET OUT is certainly a rather strange picture and it’s one I’d call “liberal horror” and I’d also lump DON’T BREATHE into that genre. I think both films are incredibly interesting and the best part about both of them is the fact that afterwards you can have a discussion about their politics, which is something not too common for a horror picture.

For the most part this was a very impressive horror film but I’m not even sure I’d call it a horror movie. I’d probably lean towards calling it a mystery with a pinch of thriller thrown in. The film really plays out like a great episode of The Twilight Zone as we got a terrific setting, a racial undertone and some great performances that keep you guessing at what’s going on. We really don’t figure out what’s happening until there’s about twenty-five minutes left to go in the film and I must say that Peele did a wonderful job in the director’s chair by having the film hold your attention. Obviously there’s a strong screenplay that manages to hold your attention even when there’s not much action going on.

The film also benefits from some terrific performances. Kaluuya is certainly wonderful in the lead role as he has a lot of different emotions to play. Not only is he the fish out of water but his character is also given some personal drama that plays out throughout the film. Williams is also extremely good because she’s playing someone that you don’t know where the character stands. She has to walk straight down the line to keep the mystery going and she does so perfectly. Both Keener and Whitford are extremely good as well as is Marcus Henderson.

As I said, the racial and political elements are right in your face and it’s refreshing seeing a horror movie that doesn’t shy away from this. The alternate ending is actually a lot better than what’s on the theatrical cut but it’s easy to see why it was changed. Heck, I’m shocked that the screenplay was even able to get funding. I think the first hour is much better than the final thirty-five minutes and especially when the mystery is finally revealed. I’m not going to spoil anything but GET OUT certainly makes you discuss what it’s about afterwards.