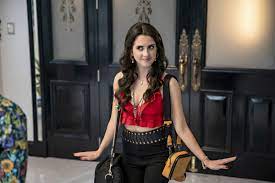 In The Royal Treatment, Prince Thomas of Livonia (the live-action Aladdin‘s Mena Massoud, someone I’m genuinely happy to see again in a movie, although I wish the material were better) is surrounded by the usual cavalcade of yes-men royalty are subjected to. His colorful shirt makes him look like a box of Froot Loops, and his hair is an ungroomed mess, but his assistant Walter (Cameron Rhodes), among his kingly father and others, insists he looks great. Thomas decides to push back by imploring Walter to make an appointment with a high-class hairdresser during their trip to New York. Walter obliges but manages to get confused dialing hair salons, winding up phoning the down-on-her-luck but ambitious Isabella (Laura Marano).

After Isabella’s father’s tragic death, she inherited a hair salon establishment and runs the place alongside her mom, grandma, and trusted companions. This loud and energetic group of mostly interchangeable characters could also use the cash such as job would provide, especially considering everyone but Isabella is prone to allowing a hazardous environment. Case in point, the building is set on fire not once but twice. Nevertheless, Isabella often dreams of traveling and exploring cultures, as evident by a globe inside the hair salon, so there’s excitement to mingle with legitimate royalty.

Admittedly, there are one or two earlier laughs in The Royal Treatment as Isabella forces some unnecessary regal behavior toward Thomas, a more laid-back and casual prince. The situation also turns out to be a reminder not to expect too much from your heroes, as Isabella also exits the luxurious dimension, effectively walking out on the job upset and disappointed that the higher-ups treat the hired help without much class or respect. They are scolded for dropping dishes, and knowing their name is unnecessary, which offends the noble Isabella, whose real passion is to make positive class changes in the world.

After some personal apologizing, Isabella and Thomas do restart on a better note, so much so that the family decides to hire the salon to work on the upcoming royal wedding, which is nothing more than an arranged marriage for Thomas. The bride-to-be is Destiny (Chelsie Preston Crayford), whose family is said to own the majority of Texas, meaning it’s evident that this is a lucrative arrangement based on land and money. Naturally, Thomas barely knows Destiny and doesn’t seem to enjoy or share her passions (she’s obsessed with dogs), with one of the brighter moves from Holly Hester’s script being the decision not to vilify her. Destiny does not want Thomas, either. It’s the guardians that are the problematic ones.

With that said, The Royal Treatment is still beholden to a painfully generic romantic comedy template with equally flat direction from Rick Jacobson that’s never enough to make the proceedings engaging. Livonia’s multicultural melting pot setting is the unique angle the story has going for it, which doesn’t matter if all the characters are walking clichés. Occasionally, there is decent chemistry between Mena Massoud and Laura Marano, as she explains that royalty should prioritize the needs of the commoners. However, there is no palpable spark between them, plenty of dead air around them with overacting and annoying characters, and not a single surprise as to where any of this will end up. The treatment here is cheesy, bland, romantic comedy 101.