Untold: Malice at the Palace 2021 Movie Review
Skip to content 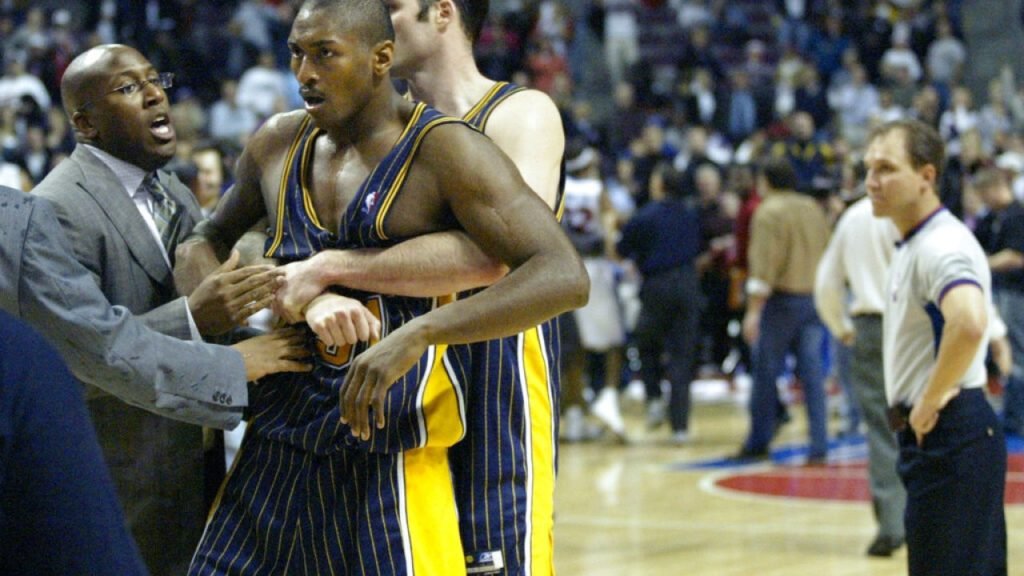 One of the darkest chapters in Detroit sports history gets the deep-dive treatment in Netflix’s “Untold: Malice at the Palace,” which unpacks the infamous 2004 brawl at the Palace of Auburn Hills when players and fans came to blows.

The story of the near-riot isn’t exactly untold, as it’s been examined up and down and all around and has been aired and re-aired an untold number of times. But the documentary special, part of Netflix’s five-part sports-doc series — other chapters focus on boxer Christy Martin, tennis player Mardy Fish and Caitlyn Jenner — takes on the incident from a unique perspective, at least around these parts, looking at it through the eyes of the Indiana Pacers team at the center of the storm.

The season prior to the melee saw the Pistons and the Pacers battling it out in the Eastern Conference Finals. The Pistons won that series, and went on to win the NBA Finals, yet another missed opportunity for Pacers legend Reggie Miller to win a championship ring.

The 2004-05 season was Miller’s last chance at a trophy, and the Pacers came into the early-season meeting with the Pistons locked and loaded. Indiana controlled the game throughout and held a commanding lead over the home team. So when the Pacers’ Ron Artest committed a hard foul on Pistons center Ben Wallace late in the game, it was seen as unnecessary and Wallace responded with a hard shove on Artest.

A skirmish unfolded and likely wouldn’t have been anything more than that had a fan not tossed a drink directly at Artest, which landed on his chest and sent him into the stands swinging wildly, ensuring that Nov. 19, 2004 would go down in the history books.

Director Floyd Russ talks to players, team execs, fans, commentators, the refs and even Oakland Country prosecutor Dave Gorcyca, who essentially calls all the manhours he wound up dedicating to the case a colossal waste of time.

But mostly he focuses on Pacers players Jermaine O’Neal, Ron Artest, Stephen Jackson and Reggie Miller, and how they built toward that night and how it ended up affecting them going forward. (Ben Wallace is the lone Piston who is interviewed on-camera.)

Those Pacers players weave a compelling narrative about their respective backgrounds and what brought them to be teammates on that Pacers squad, and how they aimed to bond together as a team to help Miller capture a championship.

Artest, the most notorious of the bunch, remains a fascinating, troubled figure. He’s open about his struggles with depression and anxiety, which then earned him the label of “crazy,” but now would likely be handled differently. We don’t arrive at today’s acceptance of mental health issues without earlier examples like Artest.

We finally arrive at the brawl itself — the footage still shocks to this day, nearly 17 years and endless replays after the fact — as the line between fans and players is erased when Pacers players climb into the stands, fans hit the hardwood floor and a night that lives in infamy unfolds in ugly, horrifying fashion.

The media reaction was swift and predictable: “thug” became the unfortunate label of choice for those involved, and then-NBA commissioner David Stern handed down a series of unprecedented suspensions.

In the aftermath, it goes without saying that the Pacers didn’t get their championship — they lost to the Pistons in the second round of the playoffs, which isn’t mentioned here, as the Pistons went on to nearly win a second straight NBA Finals — but the incident loomed large over the season, and continues to reverberate today.

“Untold” partially hangs on the promise of unseen video footage that seeks to change the narrative of what happened that night, which never really arrives. But the story speaks for itself, and shows what happens when a dangerous combination of emotions, adrenaline and alcohol mix in a combustible environment. It could have happened anywhere, it happened to happen at the Palace. And hopefully it never happens again.