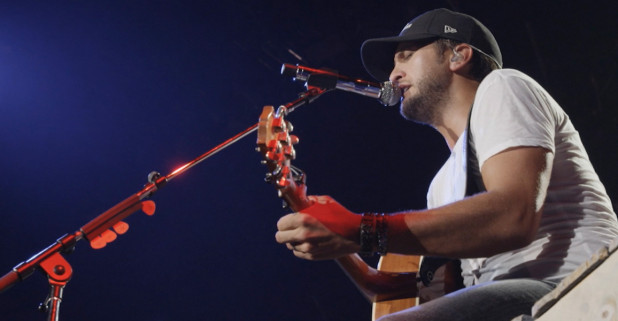 Diary entries are typically a little deeper than Luke Bryan: My Dirt Road Diary (IMDb TV) goes, but nevertheless, this five-episode set stands as a sort of miniaturized biography of the country superstar and American Idol host. Superfans might want to tune in — there’s undoubtedly a few facts about the guy in here that they can use at their next Luke Bryan trivia night.

Sometimes a simple country dirt road is way more than you think,” Luke Bryan tells us in voiceover as a POV shot ambles along just such a two-track, tall pines lining its side as a bend appears. “It’s a bit like a story with a beginning, a possible middle in the distance, and an end that you just can’t see yet.” Shimmers of old videotape emerge over the road, Bryan on stage, playing guitar, raising a beer, doffing his cowboy hat.

The Gist: Bryan’s voiceover leans into that opening metaphor, the title of this five-episode series and a song from his 2013 Platinum seller Crash My Party (“Drive around my little country town and you’lllll seeeeee…”) as the singular dirt road of life — sometimes meandering, sometimes rutted, but always with an eventual destination — leads the Leesburg, Georgia native to begin singing and playing the guitar as a kid before heading off to Nashville, becoming a hired gun songwriter, and eventually achieving a pretty phenomenal level of country music success — 75 million records sold, an Album of the Decade Award from the Academy of Country Music for Crash My Party, and a high-profile hosting gig on American Idol. Bryan appears in interviews throughout, and tells his story himself in lieu of a traditional narrator, and folks from his early life in Leesburg fill in the details — his parents, his high school drama teacher; shucks, even his elementary school principal stops by. And if including testimonials to his character from the delightful Ms. Opal Cannon isn’t wholesome enough, there’s Bryan himself, who comes across as a country boy at heart who’s proud of the place and people who made him the success he is today.

Besides the broad biographical info, Dirt Road Diary delves a little into Bryan’s relationship with his older siblings, and in particular his brother Chris. “My brother’s experience when he came back from that Garth show really showed me at a young age what I wanted to aspire to do,” Byran says about a memorable concert from Brooks that Chris saw in Tallahassee. “And I knew that was my benchmark: come out, and make sure no one sits down.” It’s a highlight moment, and Diary drives it home with a cut to a theater-in-the-round stage, ringed in flames, as a panel opens and Bryan emerges, standing on top of a full-size pickup truck as it rises to stage level.

Our Take: Well, if you aren’t one of the many folks who shelled out the base price of $4,000  to attend Crash My Playa, you’re SOL, because Luke Bryan’s annual all-inclusive “concert vacation” in Cancun, Mexico is sold out for January 2022. And maybe you’re unable to visit Luke’s 32 Bridge Food + Drink, the country superstar’s multi-disciplinary entertainment facility in the heart of Nashville, TN, with its six floors, multiple bars, three music stages and a plethora of grub options. You might have purchased a ticket to Bryan’s Proud To Be Right Here tour, which is currently winding its way through the northeast before blazing west across America and culminating in a four-night stand at, you guessed it, Crash My Playa, but the Delta Variant’s got you afraid to attend. And so, if any of these scenarios fit your everyday life, My Dirt Road Diary might just scratch your Luke Bryan itch, and do it from the comfort of your basement rec room.

“Those were the songs that I hung my hat on,” Bryan says as he recalls wearing out a copy of Clint Black’s 1989 record Killin’ Time. “It was amazing how music always came in your life. And when you’re ridin’ roads in south Georgia, you get a lotta time to put a CD in and learn music that’ll change your life.” It’s always interesting to hear a musician get right to the heart of his influences, and Bryan’s take on his formative years is as affable and open as his temperament. Seeing and hearing him cranking out covers with his high school and college-age combos, songs like “Blue Suede Shoes,” or a handful of Waylon Jennings classics, also puts some hair on the takeaways from his father about Bryan’s guitar playing (“he started plunking around around it, and sorta picked that up…”) or an early local supporter on his talent as a high school musical showman (“Holy cow, this kid could sing!”). And it’s likely these moments will resonate with the superstar’s gargantuan fanbase. But at the same time, Dirt Road Diary‘s half-hour format feels too miniscule to really get beneath the surface, to dig deeper in the dust. These vignettes have the standard-issue feel of a introductory sequence that might play in bits and pieces before one of Bryan’s big arena shows — pieces of autobiography and hagiography held together with a big chorus, almost like a country song — but beyond the fans who can’t access one of his thriving entertainment franchises, Dirt Road Diary offers very little grit for a larger audience.