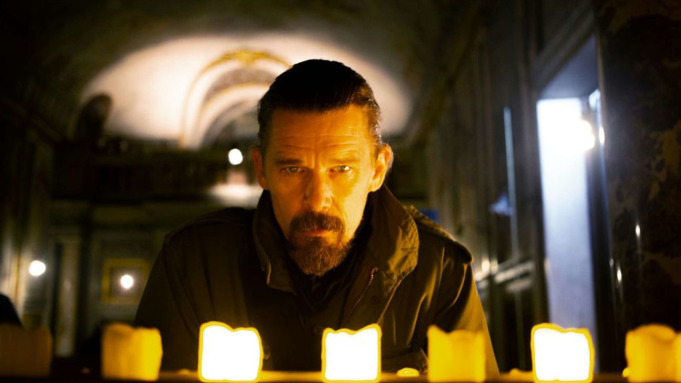 Zeros and Ones 2021 Movie Review

The pandemic has slowed some of us down, but Abel Ferrara isn’t a guy to let an opportunity go to waste, even if it’s not clear what he’s actually doing with it. After his COVID-era documentary self-portrait “Sportin’ Life” last September comes “Zeros and Ones,” a murky — in every sense — apocalyptic spy thriller shot at night during the strict lockdown in his adopted city of Rome. Starring Ethan Hawke in dual roles as a military man of uncertain allegiance and his revolutionist brother, the film will have viewers grasping for Ferraraesque judgments on the politics of pandemic protocols, though the director’s own statements clearly place him among the sane.

His acolytes know best not to struggle too hard to parse a story that’s designed more as sensory mind play than straightforward (or even meandering) narrative. St. Peter’s Basilica gets blown up, but this is hardly “Angels and Demons.” Ethan Hawke provides an explanation of sorts in prologue and epilogue speaking directly to camera, but that too is surely making a game of our expectations rather than a genuine assist to the audience (more about that later).

What “Zeros and Ones” does do — deliberately, calculatedly, in the kind of messy intuitive manner that’s been the director’s signature of late — is reproduce the general state of unease and insecurity that’s plagued most of us during lockdown, when deserted nighttime city streets are even more unsettling than in a noir film and paranoia about who gains from exploiting these empty mental and physical spaces generates troubling reflections. Ferrara won’t be expanding his fan base, but its hunger should be temporarily sated.

The film’s intense soundscape, full of the kinds of cranked-up trebles and basses that make your guts rumble, creates an aural framework more unifying than the deliberately disorienting narrative with its teasing glimpses of plot visually matched by dimly-lit scenes shot in claustrophobic close-up. The period is full pandemic, with masks and hand washing clearly in evidence, but it’s like an alternate present in which a shadowy military force controls the empty streets and only the Chinese underworld and glitzy Russian overlords operate outside prescribed spaces. It’s here that JJ (Hawke) searches for news of his imprisoned brother Justin, questioning his sister-in-law Valeria (Valeria Correale) before connecting with sinister Chinese criminals who tempt him with girl-on-girl action and mounds of cocaine.

The Chinese element is a major misstep, smacking of hoary stereotypes of opium dens where Caucasians are lured by drugs and lesbian sex. It’s a clichéd netherworld existing just below the surface of “normal” (i.e., Western) society, spreading corruption among the populace, and given strong anti-immigrant feelings in Italy, this tired trope feels especially offensive. It’s a charge that could also be leveled against the overdressed mafiosi-like Russian power brokers (including the “laughing Russian agent” played by Ferrara’s wife Cristina Chiriac), seen swilling champagne and laughing about their negative COVID status. Ferrara can’t be blind to the troubling recycling of such caricatures, in which the presence of “the other” furthers the sense of societal decadence, so why go down this path?

Other paths are less clearly marked but not potentially odious: Muslim men at prayer in a mosque is thankfully not meant to carry negative connotations, yet the scene’s significance remains vague at best. The same can be said for much else, though at a stretch one could say the film has something to do with a martyred revolutionary, Justin, whose vision of a just society runs counter to the controlling needs of military forces prepared to waterboard their enemies to stop the spread of such liberating ideology. JJ’s ambiguous position within that military system remains unexplained, just as the destruction of St. Peter’s doesn’t quite jive with the heavily underlined Christological parallels in reference to Justin.

Which brings us to Hawke’s prologue and epilogue, or more accurately Ferrara’s bookended monologues for Hawke. The pre-credit opening has the actor talking to the camera in a kind of private message to the viewer, saying the usual stuff about how excited he was to work with the director, how the script really speaks to this moment but not in a didactic way and so forth. He outlines his two roles, engages our sympathies by acknowledging “this wild year we’ve been living through,” and then the “true” film begins. But of course the prologue is integral to the film, which the epilogue openly asserts: Audiences heading for the doors during the final credits will miss this crucial coda in which Hawke says he didn’t really understand the script and then goes on to spout innocuous platitudes about death, life and the start of a new day, ending it all with “yes, this is part of the film.” It’s all a tease, a kind of manipulation which may or may not be a message to mistrust easily digested information we’re delivered in this fake news era. It’s unlikely Ferrara is telling us what to think, instead demanding we set aside the crusade for answers and ponder the state we’re in.

Ferrara’s Rome is not the Eternal City of most cineastes, and few others are bold enough to make it look so grungy. Largely shot in the late-19th-century Piazza Vittorio neighborhood, a more multiethnic quarter than most parts of the historic center, the film evokes a gloomy cityscape marred by overflowing graffiti, its streets emptied out by the pandemic (exceptional permission was granted for shooting during Italy’s strict lockdown period). For a city celebrated for its light and beauty, it’s disquieting to see Rome through eyes long habituated to the uglier corners. Sean Price Williams’ camera is intentionally over-near to its subjects, using the dislocating effects of close-ups combined with barely lit interiors and exteriors, reminiscent of a blacked-out city during an air raid, to visualize the spirit of oppression. Drone images of deserted streets act in similar ways, lightened just once by a brief shot of maskless people in a café, able to once again enjoy a cup of coffee indoors.

Zeros and Ones 2021 Movie Review