Too Old for Fairy Tales 2022 Movie Review
Skip to content 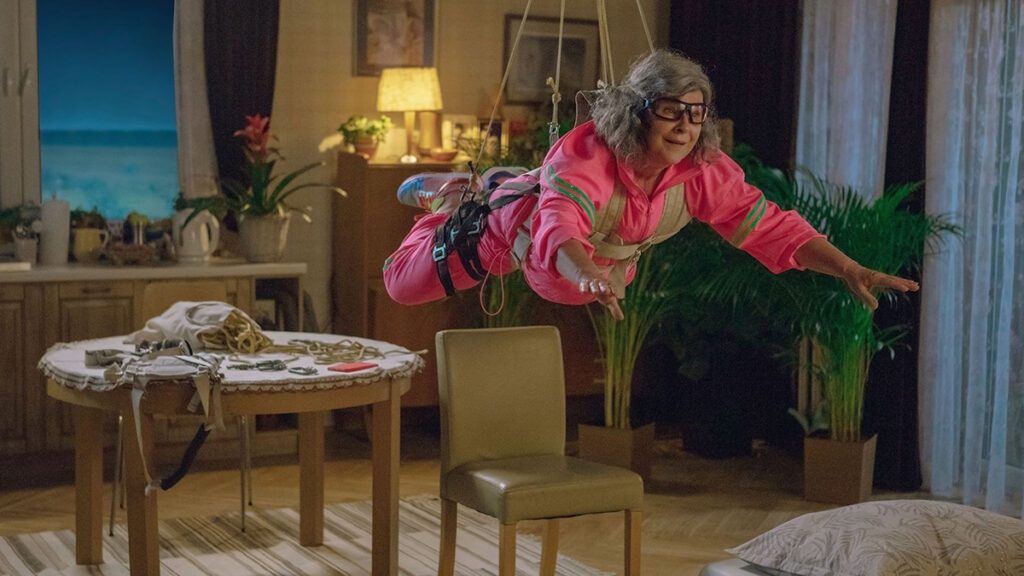 In plucky first-person voiceover accompanied by a plink-plonk musical score that can probably be found in the public domain under “family comedy movie,” Waldek (Maciej Karas) tells us all about himself: He’s an “e-athlete” who competes in Robot Rampage video game tournaments, on a team with his best pal Staszek (Patryk Siemek). Waldek doesn’t say it, but we can see that his physicality could be described as, in the parlance of the times I grew up in, which was admittedly a while ago, “husky.” And par for the course, I guess, he’s bombing gym class. His mom, Tereska (Karolina Gruszka), enables the boy, feeding him fudge and buying his Robot Rampage team expensive embroidered personalized varsity-style jackets. Maybe she’s doing the overcompensating-single-mom thing. She’s definitely a good mom. A loving mom. An overprotective mom, who won’t let Waldek cross the street by himself even though he’s way past the age of capability. And is she a sad mom whose hair looks kind of weird because it’s a wig because she has cancer? Indeed she is.

But Waldek doesn’t know that scary truth yet. Tereska fibs and says she has to leave town for a while to go to a hospital for some “tests,” leaving the boy in the care of Crazy Aunt Mariola (Dorota Kolak), who has the requisite big hair, colorful wardrobe and baffling quirk, in this case, a harness she attaches to the ceiling so she can dress like a parachuter and float right there in the kitchen. Wotta psycho. Mariola immediately enforces a health and fitness regime on Waldek: lots of bicycling and vegetables, more scrubbing the toilet, less vegging in front of the computer. Waldek whines to Staszek that she’s mentally abusive, and he may have a point, since she calls him a “chubby klutz,” although the overall tone of Mariola is that of a warm, lovingly strict aunt, so maybe something’s lost in the Polish-to-English translation of that one. Or not?

Anyway, this is the situation, and the two primary plotlines – will Tereska be OK, a looming Robot Rampage tournament – kind of simmer in the background while we get some perfunctory lightly comedio-dramatic scenes of family life and light hijinks. You know, Waldek and Staszek becoming discombooberated by a girl (Amelia Fijalkowska), Waldek sneaking out to take a bus to the hospital to see his mom, Waldek soaking up some of his grandfather’s (Andrzej Grabowski) wisdom, etc. There are failures and triumphs and embarrassments and keeping on of the keeping ons, because that’s life for a boy, I guess.

Too Old for Fairy Tales is endearingly loose, sometimes emphasizing scenes of Kids Being Kids instead of mercilessly driving the plot forward. The emotional state of Waldek and Tereska just simmers quietly, waiting to not really be wholly resolved, because when in reality is this stuff just tied up neatly with a bow? Not that this is as profoundly observational as My Neighbor Totoro or anything, but it’s nice to see a movie chill out a little and explore its characters.

But “nice” is the strongest descriptor I can conjure for this movie, which is ever so slightly too meandering for its own good, and leans too heavily on cliches and familiarities. (It never reaches full-blown diddlefarting territory, but it comes close.) Of course Waldek will warm to Crazy Aunt Mariola, who isn’t entirely crazy, and of course there will be quasi-profound small moments of learning for our protagonist, because he’s being whiplashed from arrested development to maturity. You hate to see kids grow up too fast, and Waldek grinds the gears like any kid would.