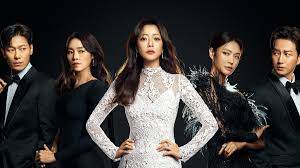 South Korean Netflix Original Remarriage & Desires enters the charged world of an elite matchmaking agency and its murky ties to the rich, powerful and corrupt. The Rex agency caters to the upper crust of Korean society, with members’ backgrounds vetted with a fine-tooth comb before admittance. Not just is it preposterously exclusive, there are grades within this niche pool too. Heading the company is the always-poised, always-collected, Ms. Choi (Ji-Yeon Cha). She may do things with a subtle smile and appear to be on your side at all times, but she is the still-waters-run-deep type; her calmness being a front for the force beneath. She instils in her wealthy clients and her all-woman team an essential mantra about Rex and life: that marriage, like all else, is a business arrangement, and every factor must be considered before choosing the right match. Love may sound like a heady proposition but it is naïve to think that that’s what makes successful unions work. It is Ms. Choi’s agenda that sets the tone for the show. The most influential male businesspeople and politicians sign on to Rex in search of the ideal partner; often, it’s their mothers who do their bidding. Young, attractive, highly educated women from “good families” sign up to be in contention for the prized catch, as it were. Your market value reduces if you’re older, are a divorcee or have children. The more you pay, the more access you are granted to Black members – the wealthiest, most successful individuals across the country. Under the veneer of sophistication, it’s all terribly patriarchal, but that’s the extent of matrimonial companies for you worldwide.

Remarriage & Desires delves into multiple complex facets of the human psyche, with the matchmaking business as its backdrop. Power, greed, money, revenge, lust, love, grief, and coming to terms with the fractured past, it’s all there in this intense drama with elements of a thriller. The show does a good job of building character and tension with each successive frame. Ignore hints of unrequired melodrama every so often and you’re set to enjoy this one – one that attempts to decode an interesting aspect of human behaviour. We see through its eight-hour run how far individuals driven by vengeance are capable of going and the extent people are willing to travel for love (not just romantic love but parental love too). Parental neglect/cruelty is one of the primary themes explored, with two key characters’ varied responses to the absentee fathers in their lives providing important windows into their respective personalities. The writing impresses in Remarriage & Desires. Despite some things that could have been presented differently or in a less dramatic manner, you can forgive its minor flaws for the character arcs it comes up with. Whether that involves Seo Hye-Seung (Kim Hee-Seon) and her need for vengeance/closure while taking care of her teenage daughter and making ends meet or Jin Yoo-hee’s (Jeong Eu-Gene) desire to wreck everyone on her way to the top because of her troubled past or the fact that Lee Hyung-Joo (Hyun-Wook Lee) and Professor Cha Seok-jin (Park Hoon) lead unfulfilling lives in spite of the access that comes attached to their names, each character is well thought through.

That being said, the writers ought to have made Jeong Eu-Gene’s character more rounded. There are glimpses showing the human side to her antagonistic persona and why she’s turned out the way she has, but she’s too one-dimensional in the series, making her a caricature of sorts. There was also potential to develop the character of Professor Cha, from a pining ex who enters to save the day one too many times, to something more meaty. In the ensemble cast, Ji-Yeon Cha, as the enigmatic Ms. Choi, is the acting standout! Beneath the professional and classy demeanour lies a ruthless woman who values patience above all else. She advises her clients to be patient while looking for an ideal match, and that such matters take time. She is a woman who practices what she preaches, waiting to strike while the iron is hot. No matter where she is or whom she’s speaking to, that unnerving half-smile fails to leave her face.

Ji-Yeon Cha’s performance is so good that you can almost see the wheels turning inside, the calculations being carefully tallied, as she measures her words. What she is, is a calm before the storm! A perfectly ominous acting masterclass which shows, that to be powerful, one must first rub shoulders with the elite and dog their every move.

All in all, the first season of Remarriage & Desires is highly watchable. With what it has going for it thus far, it seems unlikely for it not to get renewed for a subsequent season and beyond.