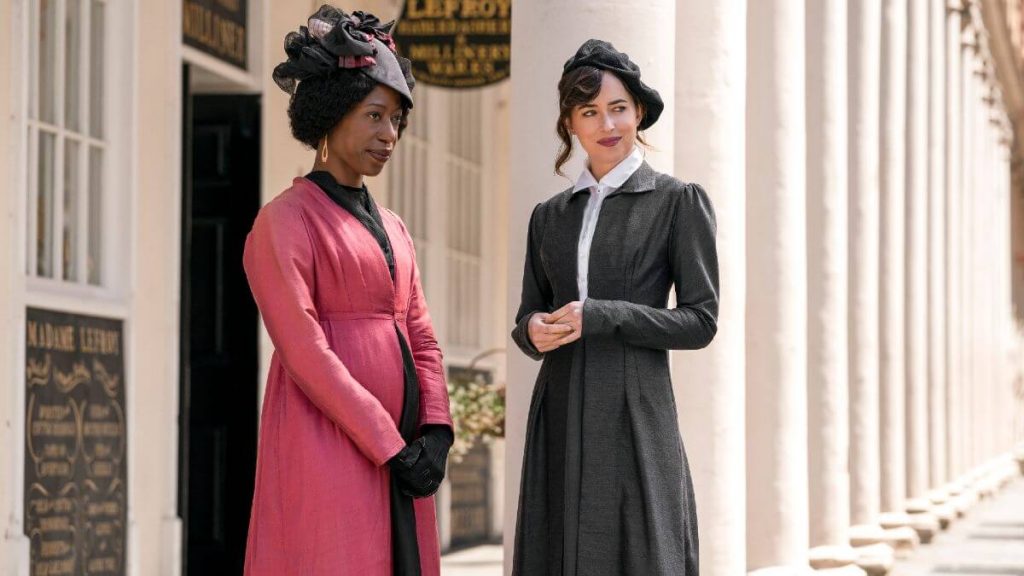 Persuasion is probably my favourite Jane Austen novel. The novel is a second chance at love story: Anne Elliott, a plain looking spinster of 27, whose life is really just being at the beck and call of her narcissistic family, gets a second chance at love, when the man she was advised to reject 8 years ago, comes back in to her life. Its all about hope and longing and rejection. Its lovely. It has some ridiculous characters such as Anne’s family, but it is not a comedy. It is very soft and gentle.

So I had high hopes for a modern production. I liked the recent Emma film so am totally open to re-workings of Austen and not beholden to what is already out there. I went in to Persuasion with an open mind, but oh my god it is dire.

The best part was the first line and it went downhill from there. After the first line it became apparent that this film is supposed to be comedy (?). I think the producers were going for a mash-up of classic Austen films, Fleabag, Bridgerton, Dickinson and Clueless. It doesn’t work. They try to mix slapstick humour, modern language, sexual innuendo and breaking the 4th wall and speaking to the audience in to this, it just does not work.

I can’t articulate how bad it truly is. I would recommend watching the BBC’s 1995 adaption of Persuasion to see how it really should be done and what the plot really is (I think you can get it on iTunes packaged in a Jane Austen boxset) which is beautiful and well cast.

As for the cast in this film. A lot seemed mis-cast for the roles. Dakota Johnson is passable as Anne. I think she looks too pretty for Anne, her not very 19th century lipstick was very obvious, her hair was annoying. Her accent is only passable, you can tell it is not natural and sometimes it slips. In fact it sounds a bit like Gwyneth Paltrow’s fake Brit accent, which also is just not right, so maybe it is all Chris Martin’s fault.

Anne’s sister Mary looks about 15 and one of Mary’s younger sisters in law looked about 35. Frederick Wentworth was ok but i ended googling the puppets in the Dark Crystal part way through as I thought he reminded me of one of them.

The film also tries to be diverse by having multicultural casting, which is fine, it works well in Bridgerton, but I wonder what the instructions were because i don’t think I saw any South Asian faces in it and the South Asian community is the largest ethnic minority in Britain. The UK is around 87% white, 8% Asian, 3% Black, 2% Mixed Race. Henry Golding was a token Asian basically. It feels like the casting was for Americans and their idea of diversity, which is not the same as the UK, and didn’t draw fairly and representatively from the community of actors in the UK.