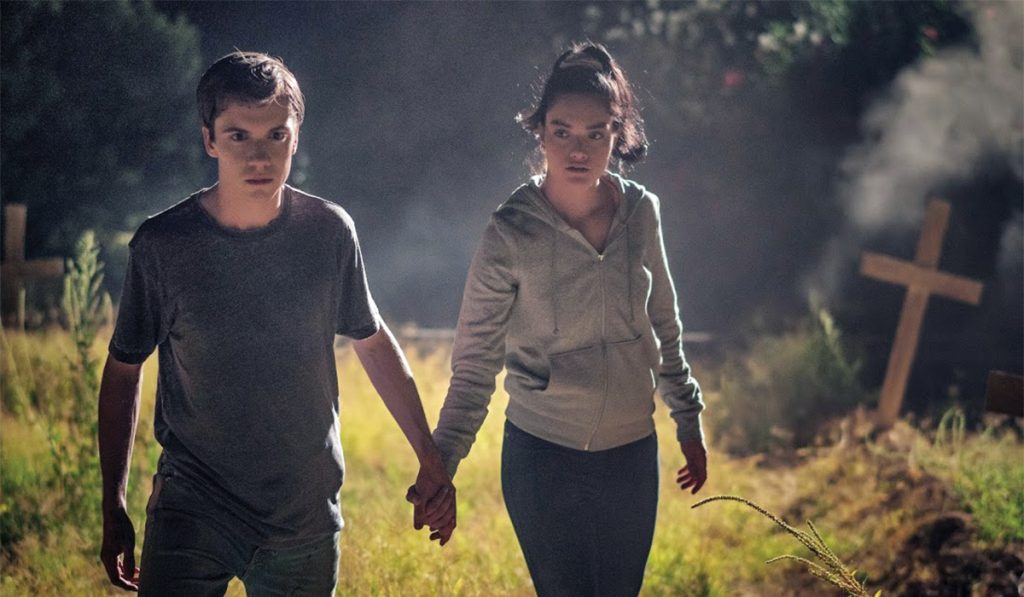 When Bernice (Natasha Henstridge) sees faith healer Pflueger (Lance Henriksen) apparently allow a severely crippled local woman to walk again, she sees a chance to restore the health of her sickly, bullied son Kelly (Elijah Nelson). Pflueger certainly seems the real deal but what Bernice doesn’t know is that he has managed to take Shaman powers which were not his right.

Inviting Pflueger to the trailer she calls home, the ritual to heal Kelly goes catastrophically wrong, resulting in the death of the faith healer. However, Kelly appears to have been cured of all that ails him, not initially realising that he’s inherited the powers Pflueger stole. Soon after, an accidental cut disappears almost immediately and a run-in with Tony, one of the high school guys bullying Kelly, ends with Tony receiving a supernatural beating.

With the growing confidence that comes from apparent invincibility, Kelly sets out to win the heart of his crush Dominique (Kayla Carlson) but the bullies, led by football coach’s kid Nelson (David Gridley) don’t take kindly to any threats to their dominance and matters escalate, causing a tragedy and triggering bloody revenge…

Well, well, well. This one is a pleasant surprise all round. The tale of the bulled, nerdy kid turning the tables on the jocks has been explored countless times and the question of what you’d do if you suddenly had superpowers has been posed over and over but The Unhealer melds both of these in an entertaining, thrilling way which somehow seems fresh due to the unusual method of revenge and much better characterisation than normal for a film of this type.

It certainly helps when you have performers of the quality of Lance Henriksen lending a hand to bolster the opening act. His contribution is a brief but impactful one, there’s no hint of him phoning this role in. Also, Natasha Henstridge is great as the tough, caring, cool mum, a long way from the lethal alien of the Species movies. At one point, kindly local Sheriff Adler (Michael Beach) offers Bernice help and it’s suggested that he’s done so because he has a thing for her. Well, fair play, Sheriff, it is Natasha Henstridge after all.

Elsewhere, the instantly recognisable Branscombe Richmond pops up as Red Elk, a Native American who’s tracking the escalating carnage and wants nothing more than to see those Shamanic powers returned to their rightful place. Initially embracing the fun of his newly acquired talents, Kelly is set on using them to keep his loved ones safe and his foes off his back. The plot immediately goes down a slightly different route than you might expect as Kelly immediately reveals his powers to his mum rather than keeping them a secret and the two of them discuss the possibilities of his gifts.

Of course, we know that the good fortune smiling on Kelly and Bernice can’t last. Something bad is surely going to happen, and it does. Can Dominique do anything to put a stop to Kelly’s increasingly dangerous behaviour or will all of those who crossed him end up dead? And what does Red Elk have in store for the one who currently possesses a supernatural strength that is not his to own?

Confidently directed by Martin Guigui, The Unhealer unfolds at a perfect pace, giving the main characters enough room to develop without slowing the plot down too much, throwing in a couple of minor confrontations to warm things up nicely before we get to the main event, which ties in Kelly’s odd previous habits with his altogether more sinister new habits of getting even with everyone who’s wronged him and his mother. He’s not even going to lay a finger on them. That won’t work. What he has to do is imaginative, chilling, darkly comic and occasionally gory (just watch for the scene in the chemistry lab and then a later moment involving a drill).

The script, courtesy of J. Shawn Harris and Kevin E. Moore, does trade in some the high school stereotypes we know and love – boorish coach, the sweet girl next door type the main guy’s in love with and so on – but these aren’t one-note versions, there’s something a little more interesting going on with most of them. For instance, the football players, save for Nelson, are less inclined to activate fight mode instantly and have doubts about continuing the feud with Kelly as matters become more serious.

Yes, coach Gus (Chris Browning) is a bit of a prick but he’s able to be smarter and more charming than your common or garden meat-headed, shouty sports guy. He even tries the disarming approach when he calls upon Bernice after suspecting the weedy Kelly is weirdly involved when one of his sons is beaten up. Of course, Bernice – and, by definition, Henstridge, is the strongest character in the piece so she’s not having any of that.

As Kelly, Elijah Nelson is excellent, retaining his slightly nerdy edge even when giving the most ominous of warnings of what’s to come for his enemies. The earlier scenes he shares with Henstridge are sweet and funny which adds weight to the second act when they’re both placed in peril. His tentative romance with Carlson’s character is fine but it’s the least developed aspect of the story. Still, sappy stuff or supernatural retribution? I’ll take the latter, please.

The final act does bring everything it can into play, including a showdown, a ritual, a shock death and a last-minute twist which can be read as either closing the book or opening a brand-new chapter. It does feel a little overburdened with tying up as many loose ends as it can but it never ceases to be enjoyable despite the chaos.

The Unhealer undid my preconceptions and unequivocally left me impressed. The main plot’s pivot packs the necessary emotional clout and the switches between amusing, shocking and downright barmy are handled with consummate ease. The premise is a doozy, the performances are engaging and it doesn’t run a minute longer than it should. This type of medicine is just what the doctor ordered; no faith healing or Shamanic antics required.