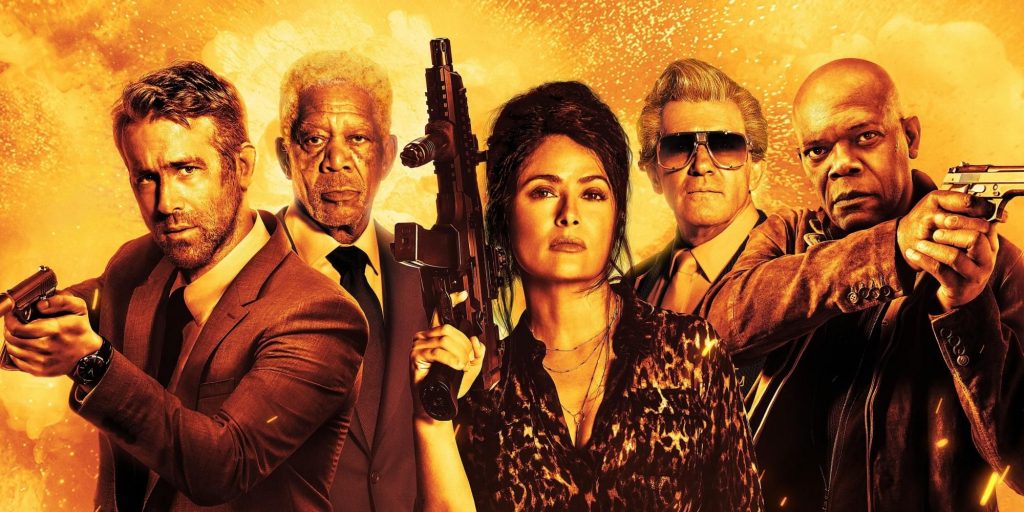 The only real upside to “The Hitman’s Bodyguard” — a low-stakes action comedy from the dog days of the 2017 summer movie season that’s better remembered for grossing $176 million off a $69 million budget than it is for anything else — is that it was an “original” film. It may have been a thoroughly mediocre outing, but it was one dropped into a multiplex world so clogged with superhero blockbusters and other well-established IP (“Baywatch” mania was sweeping the nation!) that any fresh offerings seemed to float up to the surface by dint of their novelty alone.

Needless to say, “Hitman’s Wife’s Bodyguard” doesn’t have the same advantage. But what this breezy sequel lacks in newness it makes up for with a more assured sense of self, twice the possessive apostrophes, and a picaresque approach to comic violence that veers closer to the likes of “Lupin the Third” than it does to the weighty event films that people have to come expect this time of year. No one will ever confuse this for a good movie — it lacks any evident aspirations of goodness, as if returning director Patrick Hughes made the best thing he could while strapped to a bomb that would explode if its Rotten Tomatoes score ever went above 50 percent Fresh — but it’s really, really hard to work up any real hatred for a goofy action programmer in which Antonio Banderas plays a psychopathic billionaire named Aristotle Papadopolous. Spoiler alert: He’s Greek.

To that point, the most important bit of context you need in order to understand what’s happening in “Hitman’s Wife’s Bodyguard” — a movie title so awkward that you can practically hear Sean Parker begging Lionsgate to add back the missing “the” — is that its predecessor only grossed $351,000 in Greece. Why else would a wannabe blockbuster aimed at international audiences opt for a villain whose evil plan is to destroy the rest of the European Union so that Greece is returned to its ancient glory? Even if Aristotle’s weapon of choice is some vague computer crap (Networks! Power Grids! Explosions!), it’s beyond refreshing to see a bad guy who isn’t just trying to steal a dangerous piece of surveillance tech so that he can sell our data or whatever. And while Banderas isn’t given the screen time or wiggle room that his talent demands, it doesn’t hurt that he’s always dressed like the angry ghost of Louis Vuitton just vomited all over his entire body.

It might also help to know a few details about the heroes, even if getting lost in this movie would be harder than getting lost on an escalator. The last time we saw neurotic bodyguard Michael Bryce (Ryan Reynolds) he was taking a bullet for unkillable hitman and part-time frenemy Darius Kincaid (Samuel L. Jackson), a supposed betrayal that has since resulted in him losing his license and being stripped of his access to the franchise’s John Wick-like subculture of private security agents.

When the sequel picks up four years later, Michael is still having sweat nightmares about the Bodyguard of the Year Awards (the Oscars of kevlar) and seeing a therapist who’s very sick of his whining; she orders him to take a sabbatical from work and the weapons it requires, if only so that he’ll get the hell out of her office. It takes less than one scene to remember how ill-suited Reynolds is to the role of a nerdy headcase who can’t enjoy being hot and rich because he’s sad that he doesn’t have anyone to protect. Mildly amusing as it can be to watch Jackson emasculate him from 100 minutes on end, Reynolds needs a degree of cockiness to backstop his signature sarcasm, and so much of what his character does here feels like watching him strain for some muddled compromise between an assassin and an actuary.

Of course, when a comic actor like Reynolds is cast as the straight man, his co-stars have to go to great extremes if they want to function as proper foils. To borrow some dated internet parlance that’s already been sucked dry of its coolness by corporate Twitter accounts: Salma Hayek definitely understood the assignment. Reprising her wacky role as Darius’ devoted wife and ratcheting things way the hell up now that she doesn’t have to spend the whole movie locked in a cell at The Hague, Hayek plays Sonia Kincaid as a foul-mouthed sociopath with an itchy trigger-finger and a maternal drive even bigger than her breasts (which serve as their own plot point, several times over).

It’s nothing she hasn’t done before, but her performance is over the top in a way that helps lift the entire movie toward the heightened reality of its cartoon world — especially valuable in a film that’s shot with all the style of a “Burn Notice” episode, even if its plethora of Italian locations lend it the sense of place that modern blockbusters tend to lose underneath a layer of CGI muck. There simply isn’t anyone else on Earth who can deliver a line like “I’m gonna put on a strap-on and fuck your dreams until they become nightmares” with such effortless grace, and Hayek leans into the ridiculousness of it all with the same energy. It’s almost touching to watch the 54-year-old actress own her sexuality so completely that Sonia’s age is only referenced in terms of her fertility, and even more so to see her ground this ridiculous movie in certain biological realities without ever capitulating to them.

At the very least, Sonia’s desire for a child is easier to believe than Michael’s desire for a father, as the generally fleet-footed “Hitman’s Wife’s Bodyguard” slams to a halt when the daddy issues take hold (if you don’t already know who plays Bryce Sr., you’re in for a big surprise). Other detours fall similarly flat — Frank Grillo is wasted as an American Interpol agent who’s inexplicably desperate to be reassigned to Boston — but the film is held together by the centrifugal force of watching its famous cast bounce around Europe and shoot anyone who gets in their way.

Terrible green screen, globs of digital blood, and record-scratch sound effects in place of actual jokes are only potholes along the road for a summer movie that knows what it is, and is slightly less afraid to embrace that than its previous iteration was. If “what it is” would be unsatisfying in a more creative era of popcorn cinema, well, not even the finest bodyguard in the world can protect us from the threat of mediocrity.