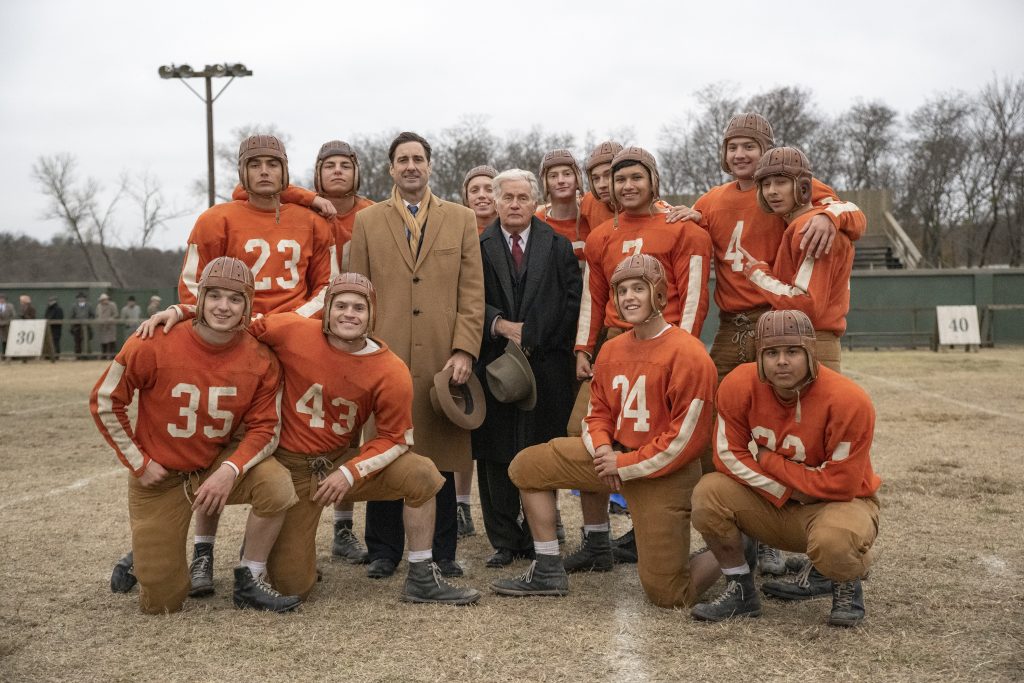 Fact and cliché mix freely in the Texas-set sports film “12 Mighty Orphans” and the ratio of the two likely will determine how viewers embrace it.

If you’re into inspiring films of underdogs who scrap against the odds — think “Hoosiers” or “Rudy” — then “12 Mighty Orphans” may be the cup of uplift needed for these times. If your guard goes up for over-the-top villains, virtuous heroes, a soundtrack that swells at emotional moments and a plot that seems like a checklist, then stand forewarned.

Those who’ve read the Jim Dent book that’s at the heart of this movie and shares its title know the facts of the real story are inspiring enough. Texas high school football coach Rusty Russell (Luke Wilson) leaves a successful program in the 1920s to start one at the Masonic Home orphanage in Fort Worth from practically nothing: a cow pasture for a practice field, no proper football, no uniforms, a flatbed truck to get to games and a prospective team with no depth, no experience and no size.

As Texas high school football fans well-versed in its history know, as do visitors to the Texas High School Football Hall of Fame within Waco’s Texas Sports Hall of Fame, Russell would become one of the state’s iconic coaches, leading his small-framed, under-resourced but lion-hearted orphans — nicknamed the “Mighty Mites” — to multiple state championship games in the 1930s and 1940s. With players regularly smaller and lighter than their beefier opponents, Russell pioneered the spread offense to offset size with speed and creativity.

Russell’s prominence in Texas high school football, incidentally, followed on the heels of Waco’s Paul Tyson, whose state championship teams of 1925-27 dominated their opposition in ways that few have matched.

The movie “12 Mighty Orphans,” directed by Ty Roberts, compresses the high points of the story of Russell and his Mighty Mites into a two-hour film in which the coach takes a team that starts having to argue for Class A recognition by the University Interscholastic League to one holding its own in the state playoffs. In real life, the team played five years in Class B before its promotion and made it to state semifinals in 1932, 1934, 1938 and 1940. Also in real life, former Baylor University president Abner McCall and his brother Scott (mentioned in the movie) played under Russell during their years at the home.

He, his wife Juanita (Vinessa Shaw) and their daughter come to the Masonic Home during hardscrabble years of the Great Depression and find an institution run on a shoestring with little concern for the boys and girls under its care outside of the money earned through their labor. A craven, corrupt and violent staffer, Frank Wynn (Wayne Knight), runs the home’s print shop, whose labor he fears he will lose to Russell’s emerging football team and he seeks to block the new coach whenever possible.

On the coach’s side is Doc Hall (Martin Sheen), who provides medical care for the home and sees Russell as a firm but compassionate father figure that the home’s young men need. The two lead the fledgling team through its growing pains of no equipment — several start with no shoes — and a defeated mindset. Russell not only has to draw out leadership from his handful of players — 12, which gives him a bench of one — but tame the internal rage and anger suppressed by several of his charges, primarily the bruising Hardy Brown (Jake Austin Walker), traumatized by the shotgun death of his father.

Russell, it turns out, is working through trauma as well as an orphan himself and a World War I veteran who witnessed his brother’s death and nearly lost his vision to poison gas. When he preaches a message of hope, optimism and self-worth, he’s learning those lessons himself.

While Russell’s and Brown’s stories of personal growth are compelling, director Roberts puts his thumb on the scale. A voice-over narration underlines a message that easily rests within the story while Russell’s opponents, primarily rival Polytechnic High School coach Luther Scarborough (Lane Garrison) and Wynn, all but twirl their mustaches at trying to foil the football coach and his orphans. Multiple plot points also echo “Hoosiers” and are predictable enough to connect with a pencil.

That said, it’s still inspiring for those able to look past the cliches and its 1930s Texas setting, with plenty of Fort Worth references, offers a good look at how physical high school football, with hard fields and minimal padding, was.

It may lack the production weight and plot nuances of larger sports films, but, like its young protagonists, it’s the heart of “12 Mighty Orphans” that’s the crowd-pleaser.