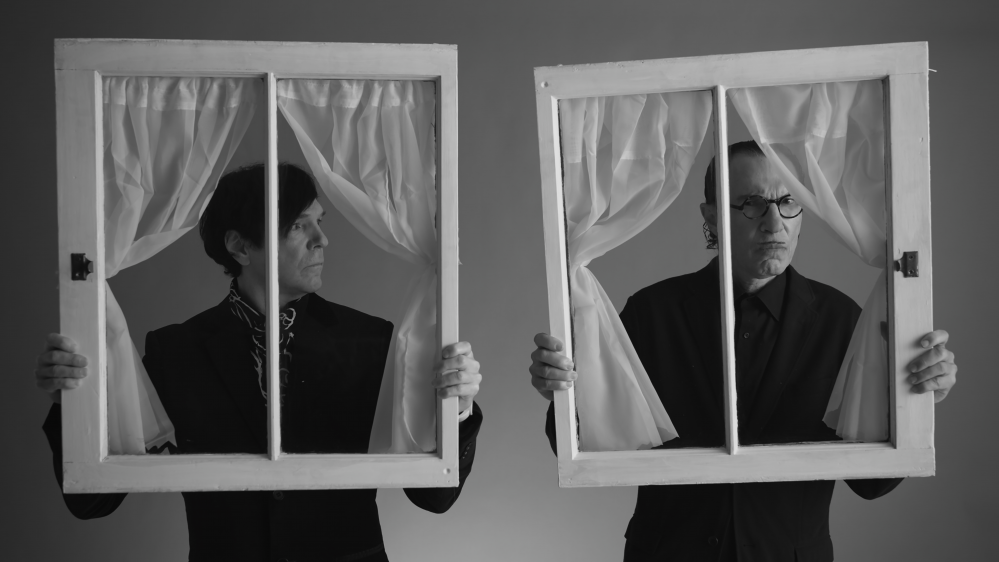 How to introduce an entity as mercurial as Sparks, the band that forms the subject of Edgar Wright’s fantastic, fond, fizzy documentary portrait, to those who don’t know them? With over five decades and 25 albums’ worth of music, sibling frontmen Ron and Russell Mael have been virtually the only constant in a group whose lineup has changed with roughly the frequency of iPhone updates, and whose sound pinballs around the pop-musical map, from glam-rock to prog-rock to electro to disco to techno. So maybe, given their fondness for the French New Wave, we’ll just say: one sings, the other doesn’t. Or, as suggested by a great clip of an aghast Shelley Winters on a 1981 talk show: One sings, the other looks a bit like Hitler.

In any case, after the 140 minutes of “The Sparks Brothers” zip by like a tight half-hour, even the previously uninitiated may well feel like they’ve known Sparks all along — or at least that they should have. In its unbombastic way, with its exhaustive archival footage deep-dive, monochromatic morsels of admiration from more than 80 celebrity interviewees and the brothers interjecting deadpan wit throughout, the film makes a persuasive case that there’s a universe running on a very close parallel to ours where Sparks are the biggest band in the world.

Every now and then a particular song hit big, and that universe almost merged with our own infinitely less interesting one. But when world domination swerved from their grasp at just the last moment, Russell (sings) and Ron (doesn’t) would simply head back to the keyboard and give it another go. Slowly, they built their massively influential repertoire and earned their “musicians’ musicians” reputation.

Many of those peers show up here, from collaborators like Todd Rundgren, Tony Visconti, Giorgio Moroder and Alex Kapranos to influencees like Beck, Björk, Flea, Duran Duran and New Order, to seemingly random celebrity fans like Fred Armisen, Patton Oswalt, Amy Sherman-Palladino and Jason Schwartzman (at one point drolly on-screen described as “Talia Shire’s son”). And yet despite the diehard adoration they can inspire (“I’ve loved them for 50 years,” says one contributor, “and I am really proud of that”), they’ve managed to preserve a certain mystique about even the very basic facts of their biography, right down to a lot of people thinking they’re British when they’re actually from Pacific Palisades, Calif.

In the early days, they did lean in to that British association, styling themselves after Mick Jagger, Roger Daltrey and The Kinks. Russell — the good-looking one, as almost everyone refers to him — had a pretty-boy Marc Bolan thing going on; Ron, from the beginning was the scowling, silent seated yang to his younger brother’s flamboyant, heartthrob yin (there is still some debate over whether they originated this often-copied singing one/silent one dynamic or were simply very early pioneers.) And their earliest taste of true fame happened over there too — many of Wright’s British interviewees trace their fixation back to one “Top of the Pops” appearance where they played “This Town Ain’t Big Enough for the Both of Us” and apparently broke the nation’s brain. “It was all anyone talked about in school the next day,” says Mark Gatiss. “It was like, did you see that? What was that?”

A couple of their erstwhile bandmates mention feeling hurt by the suddenness with which the Maels disappeared from their lives. But most are philosophical, even generous in retrospect. If you’re after gossip and backbiting, “The Sparks Brothers” is not for you, partly because with all 25 albums getting at least a quick segment, plus that extraordinary roster of interviewees, there simply isn’t time. But mostly it’s that if it’s sex, drugs and whatnot you’re looking for, the deeply unscandalous Sparks aren’t the band for you, either.

They even remain endearingly tight-lipped and gentlemanly when it comes to their romantic lives, except for one mention of Russell’s brief fling with Jane Wiedlin, which Wiedlin herself brings up: “I threw myself at him.” The brothers just don’t conform to any conventional standard of rock stardom. It’s one of the characteristic, energizing ironies of Sparks that 1994’s “When Do I Get to Sing ‘My Way’” should have been one of their biggest international hits, when they’ve been singing their way the entire time.

There are moments that don’t work — the too-cute “Visual Puns” section, or the stagier sketches that Wright arranges. But even then, the brothers’ game-faced good humor in going along with it all makes one like them even more. It’s evidence of how delighted the Maels are to be here, to be making, at long last, a movie, when the film projects they’ve been attached to over time, like their collaboration with Jacques Tati on a final Hulot film or Tim Burton’s 1980s manga musical, have tended to come to naught.

No longer, though! With the Sparks story being nothing if not a tale of perseverance, it’s deeply satisfying that Wright can end his film with a glimpse of another: the Maels, beaming, chatting to Adam Driver on the set of Leos Carax’s Maels-written musical “Annette,” every cinephile’s most anticipated film of 2021. Maybe it, and indeed “The Sparks Brothers,” will help at least a few new fans jump track into that parallel Sparks-led universe where everyone knows their music, and their indomitable values of cheerful persistence, constant creativity and being serious about your art without ever taking yourself too seriously, reign supreme.

But even if they never conquer Hollywood or attain Beyoncé-level fame, there’ll always be that crazily eclectic, melancholy and vibrant catalogue of music — not just the two dozen albums they’ve already recorded, but the dozens more that Ron, now 75, and Russell, 72, agree they probably still have in them, “given the advances in medical science.” May they live forever.