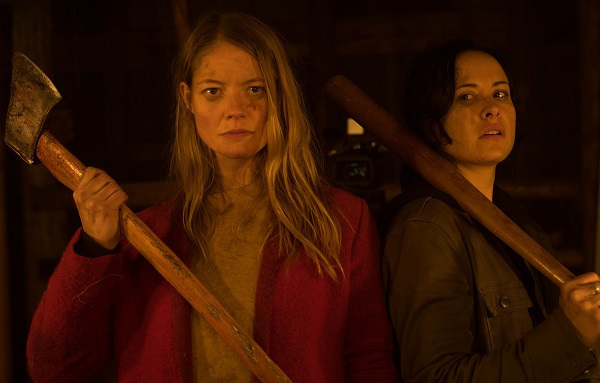 Hot on the heels of Death Ranch, which features a group of racists who torture and kill strangers, comes this film from Pat Mills, which features a group of homophobes who torture and kill strangers. The tone is very different. There are a lot films out there about hunting humans, but as Mills has pointed out, relatively little has been done on this theme. This is in itself a reason to keep the story straightforward – many viewers will be new to the subject so there’s less room to make use of established cinematic language. It also provides an opportunity to show straight viewers how it can feel to face persistent homophobia in more ordinary circumstances.

We’re introduced to the situation by a prologue which follows a gay male couple travelling to the titular retreat, which has been advertised as gay-friendly, only to find themselves in trouble. They’re friends of one of the film’s heroines but there’s no sign of them when the woman arrive. Perhaps they should realise something is amiss, but they’re used to second-guessing one another’s worries, trying not to let concerns about homophobia dominate their lives. Besides, they have other things on their minds, as their relationship is going through a bad patch and it’s less and less clear if getting married is a good idea.

A cabin in the woods might seem like a charming vacation spot to non-horror fans, but in this case it has the potential to exacerbate those relationship woes. Renee (Tommie-Amber Pirie) is in her element, having lived in backwoods country, and is keen to show off her knowledge and skills, but Valerie (Sarah Allen) may not appreciate this in the way Renee imagined. When the women realise they’re being spied on, however, they close ranks. Mills might have played this out for longer – it’s not that unusual an experience for lesbian or bisexual female couples – but he chooses instead to get straight into the action, leaving him enough time to deliver on trauma and then on revenge. this latter element, he notes, is something which queer characters are too often denied.

Given the genre’s history of minimising gay stories or dismissing them entirely, many will consider this film long overdue. It also offers a rare catharsis: an opportunity for gay and bisexual viewers to let out anger at homophobes. Beyond this, however, there is sadly not very much to distinguish it. All the familiar genre elements are there, with suspicious noises in the darkness, pursuit through trees, humiliation, torture, gore and moments of despair. Pretty much everything plays out in precisely the way fans will expect. Perhaps Mills is making an artistic point: once hatred enters the picture, we all suffer in much the same way. It’s not especially interesting to watch, however.

One wouldn’t want to be too hard on this film because everything that it does do is done well enough. Both leads are competent and they have good chemistry. Mills enjoys working with shadows and building up tension as the balance of power between captors and captives shifts. There’s a brief, interesting reflection on how women can become complicit in hate movements, but there isn’t a whole lot else. If you really need this particular kind of catharsis, it may well hit the spot. Otherwise, it’s a solid enough horror film with which to pass the time, but there are many more interesting ones out there.