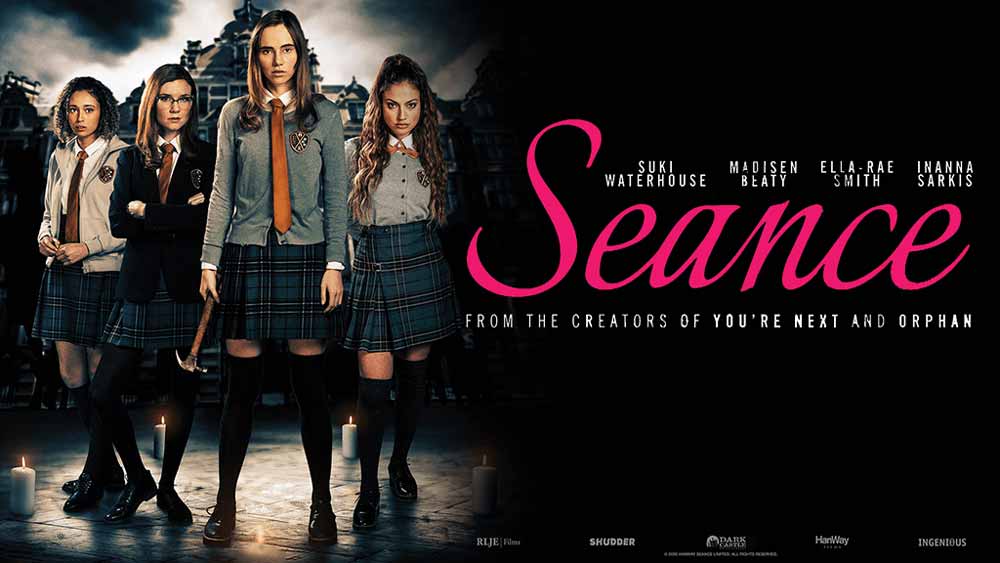 Simon Barrett’s feature-length directorial debut, Seance, riffs on the glut of faux-postmodern Scream cash-ins that arose in the late 1990s and early 2000s, particularly Urban Legends: Final Cut and Urban Legends: Bloody Mary, suggesting that there truly is a cult for everything. The film’s sense of déjà vu isn’t initially promising, but Barrett, whose screenplays for Adam Wingard’s You’re Next and The Guest stretched ‘80s tropes in startlingly strange ways, banks on this sort of familiarity as a clever form of misdirection.

At an elite boarding school for girls, several students are crouched in a bathroom reminding one another of a girl who slit her wrists in this same place some years ago. And as in many a slasher movie before Seance, this ritual kickstarts a murder spree. A new student, Camille (Suki Waterhouse) arrives at the school and is embroiled in the mystery of another student’s recent death and a Bloody Mary-like spirit. Which is to say that we’re invited to consider the narrative’s similarities to Suspiria and, as the girls bully Camille, even Mean Girls.

Barrett’s first curveball is the characterization of Camille. She’s not the usual doe of the first act of a “new girl in school” scenario, but the tough, self-assured loner of an action movie. When the governing clique’s queen, Alice (Inanna Sarkis), fucks with Camille, she gets clocked in the face. It goes without saying that Camille is living in the room of one of the dead girls, and so she forges a testy bond with the girls as corpses and ghost sightings pile up. A kinder member of the group, Helina (Ella-Rae Smith), looks at Camille with unmistakable admiration tinged with sexual curiosity, and they become friends. Around this point in the film, Seance attains a bit of the emo gravity of Barrett’s collaborations with Wingard.

Like Wingard, Barrett has a knack for painting in poignantly broad strokes that suggest the kitsch of the ‘80s. That period of culture is so often fetishized because it feels so unguarded, so nakedly willing to go for the big effect, whether it’s the big hair, the big metal ballad, or the lo-fi horror movies that wore their spartan productions on their sleeves, offering disreputable gore, gnarly social satire, or authentic ruminations on dread and despair. These artifacts feel particularly special next to the cautious, eager-to-please poses of today’s pop culture, which is dominated by generic self-actualization preached by cynical corporations. Barrett might be riffing on a couple of forgotten Urban Legend sequels, but he imbues his narrative with a purplish emotionality that those movies didn’t even think to bother with. Sicker Man’s synth score, another throwback to the ‘80s, lends the girls’ plight an aura of loneliness that’s complemented by Karim Hussein’s soft, intimate cinematography. Gradually, the horror elements cohere, becoming a metaphor for the insanity wrought by elite school pressure.

It’s difficult to tell which of Seance’s incongruities are intentional and which are merely intrinsic to the genre Barrett adores. Most of the girls are played by very polished, very adult women in their late ‘20s and early ‘30s—a common contrivance of the horror genre that, given the film’s nostalgic aesthetic, becomes resonant here. It’s as if we’re watching a dream or nightmare of school, and the girls are represented by the sort of women they desperately want to be. It’s a shame that Barrett relies on so many gimmicks in Seance’s final act, springing the usual bloodbaths and twists, as he doesn’t need them. The film’s ephemeral aura of longing, and Barrett’s palpable pleasure in atmosphere, are enough.