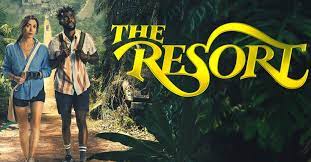 When Emma (Cristin Milioti) and Noah (William Jackson Harper) arrive at a Yucatan-area beachfront getaway at the beginning of the new Peacock series “The Resort,” they’re not expecting to dwell on the past. Sure, their trip comes under the guise of celebrating ten years of marriage, but as they and their resort mates soon agree, that anniversary trip is intended to be just as much about what lies ahead.

That all changes when a mishap on a day trip excursion starts Emma on a serpentine path through a local unsolved mystery involving two young visitors to the area over the 2007 holiday season. Slowly and assuredly, “The Resort” becomes a two-pronged play, with Emma and a reluctant Noah searching for the truth, interspersed with what did happen for and to Sam (Skyler Gisondo) and Violet (Nina Bloomgarden) in those nights around Christmas. The first in a series of choices that show there’s more to “The Resort” than on first glance is that those flashbacks don’t just take the simple “Fifteen Years Ago” approach. Transitioning back and forth between two different types of discovery becomes a dance across time and space, with some talented and mischievous architects as guides.

The show’s elastic relationship to time isn’t a surprise considering writer/creator Andy Siara’s breakout script for the 2020 Sundance-turned-lockdown streaming hit “Palm Springs” (which also co-starred Milioti). But beyond the surface-level connections, there’s an atmospheric link, too. “The Resort” also features a main pair facing the enormity of some mystical possibility with a slack jaw and a wink at the same time. It’s not that Emma isn’t invested in finding the key to what happened 15 years ago. She and Noah are just very conscious of how their search doubles as a metaphorical one, too.

That search has the kind of shagginess that’s somewhat inevitable over an eight-episode telling, even if those chapters are in the half-hour range. “The Resort” does find some ways to work that to its advantage, though. Milioti and Harper are right at home in the early going, stepping right into two characters who have the familiarity, warmth, and exasperation of a couple that’s been married for a decade. They move so effortlessly from goofy banter to spiraling quibbles that you buy how each of them would be eager to hop onto a wild goose chase as a means for papering over the problems in their relationship.

As much as the parallel stories of young infatuation and weathered love take center stage here, “The Resort” also draws on a mismatched group of other folks around the edges. The show doesn’t always succeed in having those supporting players feel like more than pieces to an end, but the people who do get the space to embrace the full emotional spectrum at work on display in “The Resort” absolutely make the most of it. Chief among them are Luis Gerardo Méndez, as enigmatic investigator/tailor Balthasar Frías, and Nick Offerman who adds to his growing list of empathetic, kindly dad roles, this time playing Violet’s father. Both have a sharp handle on the balance in “The Resort” between the metaphysical weight of decades of pain or insecurity, and the silliness that also comes hand in hand with life’s headiest mysteries.

Given the tropical cold case premise, it would be easy to call “The Resort” an in-between hybrid of “The White Lotus” and “Only Murders in the Building.” But while it does share some passing similarities, “The Resort” has a willingness to embrace a strangeness that fuels its more memorable moments. Adding to a proud tradition of shows that challenge its core characters to let the mystery be (including, notably, Siara’s prior TV stop “Lodge 49”), “The Resort” is ultimately less concerned with answering puzzles than figuring out what draws people to looking for any kind of solution in the first place.

Maybe the person in this whole project who best embodies that is Ben Sinclair, who directs the opening half of the season and establishes that early visual methodology of gliding between timelines. The further the season progresses, Sinclair’s contributions come more in front of the camera, as his part in this giant cosmic swirl comes more into focus. In either role, there’s a distinct playfulness that helps the overall show avoid getting bogged down by the usual amateur detective show self-seriousness.

It’s hard to be driven by the idea that digging into the past can be both cathartic and manipulative and questionable, all without plunging into out-and-out satire of true-crime sleuths. Sure, there is an evidence wall and a case file and a tour through a shadowy abandoned building here. But Siara, Sinclair and the rest of the show’s writing and directing team are always conscious of the past as something that exists on its own, not just in service of one character’s self-fulfillment.

That also shows in the way that “The Resort” isn’t overly coy or withholding about how Sam and Violet fit into this whole tapestry. There’s just enough narrative slack between what Emma and Noah are uncovering (often literally) and the circumstances of 15 years prior. It turns their hunt from a theoretical exercise into an actual physical journey, one that Harper and Milioti enrich at every step along the way. It especially pulls Emma to the extremes, and Milioti is remarkable at sliding between tipsy clue hunting and a far more sober internal pleading for all of these hijinks to add up to something meaningful.

Along the way, “The Resort” has its share of red herrings amongst the web of eclectic individuals, rainbow-colored details, and some pivotal SIM cards. But like those transitions and the psychedelic bookends to most of the eight episodes, “The Resort” keeps that sense of flexibility throughout. It’s a show that thrives on reminding anyone watching that time and memory are never quite as solid as we want them to be.