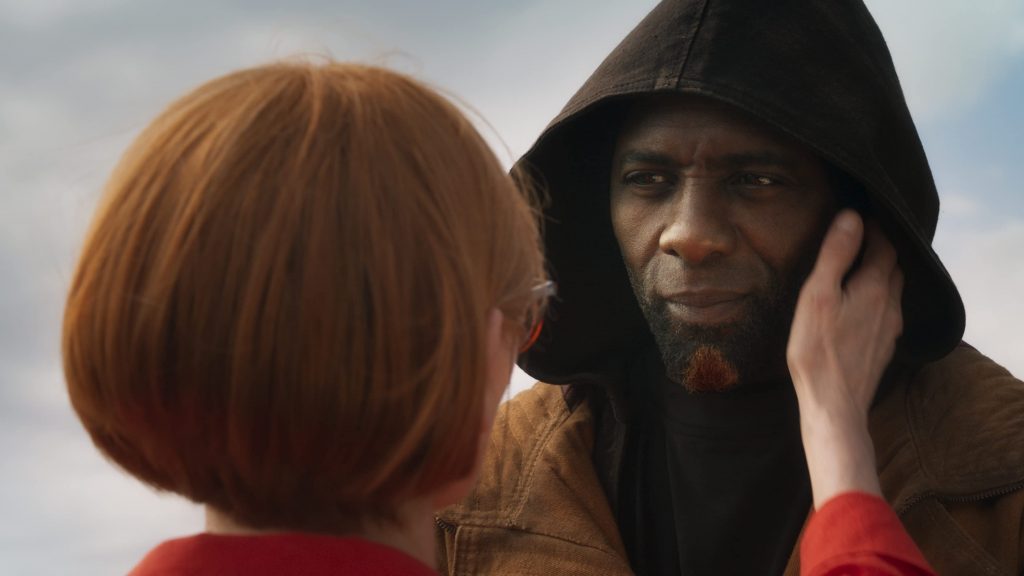 A bittersweet modern fairy tale from one of cinema’s most bombastic virtuosos, George Miller’s “Three Thousand Years of Longing” might have some reservations about the 21st century — the movie often wrestles with the impact that science and technology might have on our ancient sense of wonder — but at the bottom of this tightly bottled epic sits a question that should resonate especially hard with people who have spent too many of the last 3,000 days stuck inside their homes with nothing but “content” to keep them company: Are stories enough to satisfy our lives?

Acclaimed narratologist Dr. Alithea Binnie (Tilda Swinton, as if “acclaimed narratologist Dr. Alithea Binnie” could possibly be played by anyone else), would like to think so. Once upon a time she was married to a handsome academic, but when that schmuck left her for someone younger, she learned to make peace with her solitude. Being on her own — no partners, no parents, no children — affords a brilliant mind like hers the freedom it needs to flourish (read: travel the planet giving Powerpoint presentations about how the myths once used to contain all of the world’s mystery have so little value that they can now be contained by comic books).

In fact, Alithea is so content with her situation that she can’t think of anything to ask for when a massive, shirtless Djinn with a long, long, long-standing obsession with fulfilling women’s deepest desires puffs into her Istanbul hotel room — the same Istanbul hotel room where Agatha Christie wrote “Murder on the Orient Express” — and offers her three wishes. Even with an orange-flecked goatee and a pair of pointy elf ears that are always on fire, a half-naked Idris Elba the size of a school bus would probably be enough to leave a lot of people feeling like they only had one wish left. But Alithea is unmoved.

Until, that is, the Djinn starts regaling the skeptical narratologist with floridly wistful stories about the Queen of Sheba, the slave girls of Suleiman the Magnificent, and all of the other beauties who defined his journey through the millennia.

If this all sounds like the stuff of a single-location pandemic movie, don’t fret: George Miller cannot be contained. For one thing, “Three Thousand Years of Longing” is based on an A.S. Byatt short story that Miller has been hoping to adapt since the late ’90s, and the project wasn’t conceived with any COVID parameters in mind.

More to the point, this is still the same guy whose most recent film was “Mad Max: Fury Road.” The same guy who once shot a biodrama about a kid dying from a degenerative brain disorder with the madcap energy of a Ken Russell musical, and made the sequel of a beloved family movie about a talking pig into a magically deranged adventure that starts with Babe almost murdering James Cromwell and then spirits him away to a hostile city pets full of poodle prostitutes, homicidal chimpanzees, and one very deranged Mickey Rooney. George Miller could find more cinema in a single hotel minibar than some contemporary directors could squeeze out of an entire galaxy far, far away, and he manages to do exactly that without unbalancing the delicate soul of the intimate two-hander he wields here.

Maximalist in its mediativeness and meditative in its maximalism, “Three Thousand Years of Longing” might seem to beg for a scale on par with similarly many-splendored epics like “Cloud Atlas” and “Everything Everywhere All at Once,” but Miller’s film can’t afford to grow so vast that its various stories overshadow the purpose of telling them. The result is a movie that splits the difference between “Arabian Nights” and “Good Luck to You, Leo Grande,” as the script’s frequent (but super economical) asides to the Ifrit-haunted palaces of ancient Yemen or the sable-lined sex prisons of the Ottoman Empire never stray all that far from Tilda Swinton listening along in her terrycloth bathrobe; the movie isn’t necessarily sedate, but it’s always looking for a kind of lasting serenity that Miller’s films have never sought before.

Alithea’s familiarity with classic myths leaves her both refreshingly unfazed by her impromptu date with a Djinn, and also deeply suspicious that he might be a trickster in disguise. After all, what story about free wishes doesn’t turn into a cautionary tale by the end? Her goading uncertainty prompts the Djinn — who’s been so desperate to share his memories with someone, and could never have dreamed of finding such a receptive audience — to regale Alithea with his misfortunes as if doing so might itself be enough to free him from his bottle forever.

Swinton, it goes without saying, is peerlessly good at threading the needle between earthy distrust and otherworldly understanding, while Elba (iffy CG smoke-trails and all) manages to draw a tender study of loneliness out of a mythical creature that Hollywood has long reduced to a hoary trope. In fact, the two stars are so sweet and searching together — their characters’ respective power and mutual solitude pulling them together with practical magic — that some of the film’s more spectacular detours seem flimsy by contrast.

With all due respect to Robert Ford’s production design (it’s never a bad thing when a movie’s sets earn comparison to “The Fall”), or the impressive degree of freakiness that Miller and his team are able to stuff into a single image of Solomon wooing Sheba, the Djinn’s tales are always more compelling for his sad and self-deprecating commentary on them than they are for any of their murder hijinks. Miller’s penchant for garish slapstick often strains for laughs in story threads that have more pressing things to do with their time, and his most orgiastic subplot ends with a cheap punchline that hits a bit below the belt. Then again, there’s also a scene where a guy’s head falls off and turns into one of cinema’s gnarliest demon spiders and then explodes into a zillion smaller spiders and it’s hard to complain about any movie that can fit that into a super touching middle-aged romance.

And, despite its excessive use of Papyrus, “Three Thousand Years of Longing” is touching — more so than it seems primed to become for most of its running time, and more so than its disjointed structure seems able to allow. The chemistry between Swinton and Elba grows increasingly potent as the film pivots into its very different third act, and even Miller’s weirdest swings (including a belabored scene built around a metal detector) are supported by their collective suggestion that finding true love isn’t any less fantastical than meeting an immortal Djinn who’s been using his “subtle fire” to give women smoke orgasms for 3,000 years.

Our lives are so embarrassingly replete with wonders that flying through the sky or summoning cars to your door with a piece of magic glass no longer move the needle, but there are still plenty of things that people don’t understand about the world around them, or refuse to understand about the people with whom they share it (as you might glean from the film’s abrupt pivot towards social commentary at the 11th hour). “Three Thousand Years of Longing” finds that even the most ancient tales can prove illuminating about those things if they’re told with enough gusto, but also that it’s so much easier for us to see ourselves in those stories if we have someone to share them with.