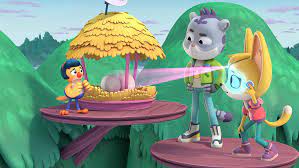 The Creature Cases is another in Netflix’s long line of preschool shows, and if you or your child are fans of Octonauts, you will like this.

The series focuses on Sam Snow, a snow leopard, and Kit Casey, a fox, who are agents for CLADE, the Covert League of Animal Detective Experts. This series chronicles the pair’s missions, given by their boss, Director Scratch, cracking mysteries centered around animals and what happened.

This is a great series. Aside from Sam and Kit, the series has memorable characters like Bill and Jill, the Mice Squad who serve as the ones who find the missions for the duo, as well as at the end of each episode, have a segment called Fact File talking about an animal in said episode (which is like Octonauts’ own Creature Report segment), and the Stinkwells, twin skunks who make the pair’s gear (and serve as an occasional fart joke, which thankfully, is kept to one per appearance).

The voice acting is well done, and the stories are full of action as well as comedy, making this a neat edutainment show for little ones.