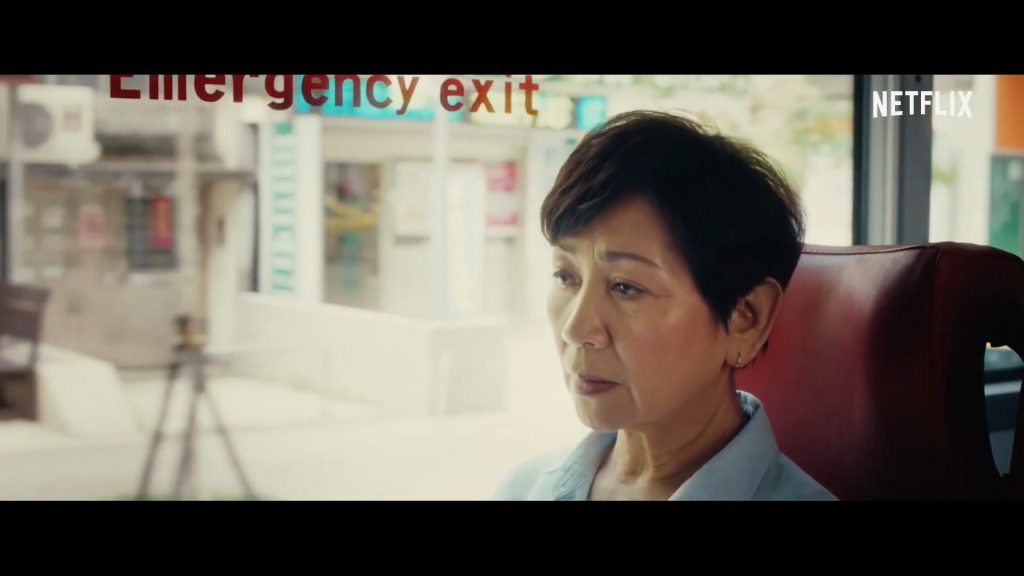 Young director CJ Wang presents with “Reclaim” her feature length directorial debut. Before turning to film, she worked in theatre. Since then she made several shorts. “Reclaim” is an ambitious work, showing undoubtedly great skills, but also some clumsiness in certain aspects.

At the centre of the story is Miss Yeh (Nina Paw). She is an art teacher and has a workshop in which she creates miniature furniture for toy houses. She had always dreamt of traveling the world, but instead she married and started a family. Her husband (Johnny Kou) is already retired, sits at home in his armchair, browses through his smartphone and bosses his wife around as soon as she gets home. Without her he can’t sort out the trash, fry an egg or even put back the milk can into the fridge – well, he doesn’t want to know how to do it. Besides her husband, there is also her adult daughter (Chia-Yen Ko), an architect, who wants to start her own business, but needs to save on her budget and therefore moves back in with her parents. Yeh is happy to support her, but the daughter takes the spare room Yeh had prepared for her dementia sick mother (Chia-An Yu).

Therefore starts Yeh’s odyssey through Taipei’s real estate market, to find a bigger apartment in which everyone will fit. In this attempt, she has the support of her best friend (Yi-Ching Lu), who brings in her financial consultant (Mason Lee). The latter promises big investment returns and convinces Yeh to entrust him her savings.

The protagonist of this social study and individual emancipation drama is a multi-layered one. We see an active, working woman, who does everything to please anyone around her. Her family has gotten used to it. The more she does for them, the more they ask her to do. If they at least were grateful for it, maybe it would be acceptable, but no, they rush her and criticize her constantly. Nobody cares for her needs. Her privacy and her wishes do not matter. So for example, her husband only sorts out her books, while his so called antiques fill a whole room. He decides what they use their money for and what they watch on television – a deep sea documentation instead of a love film with Richard Gere.

Even though some of the twists and motifs are predictable, the script is all the same dense and precise. The dialogues are reduced to a minimum, it’s the gestures that speak the most. The film tells an old story. The story of a traditional family constellation, in which wife and husband have clearly defined roles. Here the wife has mutated into a house keeper, somehow a general manager, found and lost officer, personal cook and emotional punching bag. The title of the drama is very fitting. “Reclaim” shows how the main character, quite late but still, finds a way to stand up for herself. The strength of the movie is that this happens gently. There is no abrupt, violent breakout.

This is not necessarily reflected in the narrative rhythm, because the pace is overall quite fast. Nevertheless, there are scenes that are too long, and a bit repetitive. Nearly half an hour of the two hours duration could have been cut for the benefit of an even denser experience. Moreover, the director inserts a few dream-like scenes that appear isolated. They do not help the story and actually are too sentimental. They disturb a bit the otherwise quite realistic and dryly told plot. But these are only small defects, considering the otherwise touching and cleverly orchestrated film.

“Reclaim” wins enormously with its acting ensemble. In the role of the female protagonist we see Hong Kong film star Nina Paw, who pairs up perfectly with Taiwanese actor Johnny Kou. They could easily be mistaken for a real-life old couple. They are at their best when they interact in the small apartment, barely looking at each other, keeping the biggest physical and at the same time emotional distance between them.

Since most of the plot is set in the couple’s flat, its décor is very important. And it fits the characters with its classical and a bit outdated style perfectly. The colors are rather dark ones, with a lot of browns. They evoke a slightly suffocating, claustrophobic atmosphere. A recurrent and very intelligently used element are stairs. The stairs at the protagonist’s own apartment house, but also at the many buildings she visits while she searches for a new flat. The up and downs, including the times she takes the elevator, can be read as a symbol for her constantly being in movement, constantly working for the sake of others and taking care of them. When she finally gets a moment of rest, someone asks for her first name. She doesn’t know what to answer. It has been ages since she concentrated on herself.

For most of the framing, CJ Wang chooses a steady camera and point of view shots. Overall, the director opts for a somber aesthetic, except from when it comes to the individual dream sequences. There the images receive a cheesy filter. Cheesy and quite conventional is also the use of music, typical for mainstream dramas.

“Reclaim” contains a few ingredients of a crowd pleaser, but still it convinces with interesting, not superficial characters and a lovely cast. The director paid a lot of attention to the details and composed the film carefully. At points less would have been in fact more.