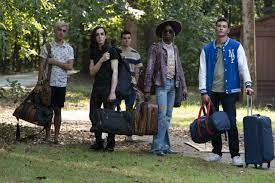 Sometimes the biggest offense of a movie is missing the opportunity to create something truly impactful, a sin that They/Them unfortunately commits. Set in a conversion camp for LGBTQIA+, John Logan’s directorial debut features an impressive cast of characters suffering from the horrors of being different in a society that alienates anyone who deviates from gender and sexual expectations. And if They/Them had poured all its energies into bringing these horrors to life, the movie could have been the LGBTQIA+ movement’s Get Out. However, the introduction of slasher elements results in an uneven film that sadly depends too much on exhausted tropes.

It’s no surprise that They/Them introduces layered and complex characters. Logan has already collected three Academy Awards as a screenwriter for Gladiator, The Aviator, and Hugo—all three crowd pleasers filled to the brink with characters that feels human. That’s also true for They/Them, in which we can cheer for – or despiOn that note, we must praise Kevin Bacon’s performance as Owen Whistle, the director of Whistler Camp. Bacon is phenomenal in They/Them, hiding his disgust for what he sees as perversion behind beautiful speeches of tolerance. At the same time, Bacon can instill a sense of genuine care into Owen, making us realize the director believes he’s truly helping the guests of his conversion camp. Opposing Owen at every turn, we have Jordan (Theo Germaine), a trans non-binary person who defies Owen at every turn, exposing Whistler Camp’s hypocrisy and revealing the campers are victims of a brutal process that aims to destroy their self-esteem.se – characters, with all their contradictions and complexities.

And speaking of victims, They/Them does a wonderful job in introducing a diverse cast that represents all the different ways we can be humans. That’s part of the beauty of They/Them, as the movie shows that there are many ways to be a person inside the spectrums of genre and sexuality. Among the campers, we have closeted lesbian Kim (Anna Lore), who’s looking to be accepted and thinks conversion is the only way to lead a regular life. We also have Alexandra (Quei Tann), a trans woman who’s confident and proud of who she is and who was forced to go to camp in order to please her family. We also have Toby (Austin Crute), a flamboyant gay man who knows he’s attracted to men just like Stu (Cooper Koch), the perfect example of a high school athlete’s stereotype. Rounding up the main cast, we have Monique Kim as bisexual woman Veronica and Cooper Koch as gay man Stu, both claiming they willingly went to Whistler Camp because they are tired of feeling cast out.

There’s more than one way of being gay, lesbian, bi, asexual, and everything in between. Besides that, our sexual dispositions are not necessarily related to our genre identity. And by exploring a cast of sympathetic characters that all look and act in their own way, They/Them makes a powerful statement for acceptance. We are all different, and we are all human, so maybe we should just let everyone exist just as they really are. Humans are assholes, though, so we create places like Whistler Camp to force some people into straight, narrow, and insipid boxes.

They/Them must also be commended for how it approaches the theme of community, both as a threat and a support system. If there are so many young people being committed to conversion camps, the reason is none other than a community that refuses to accept differences. When the campers reveal they were put there by their rigid families, or they chose themselves to go to Whistler Camp to learn how to be “normal,” what they are really saying is that it’s hard to fit in, and as social animals, we all need to find means to connect with other people. Lamentably, the desire to be part of a community also leads to self-hate.

Even so, a community can also be fueled by love, and as the group of campers creates a deeper connection between themselves, they help each other to accept who they are. This process is essential for them to keep their integrity, as the Whistler Camp attacks on their bodies and minds grow more viciously as the days go by. So, while They/Them is a cautionary tale about the dangers of accepting rules imposed by a community to the detriment of your own self-esteem, it is at the same time a celebration of our ability to stand for the differences as we build new and better forms of socialization. There are so many great things going in They/Them that it can be appalling to watch the disastrous inclusion of typical slasher tropes, complete with a bland masked serial killer.

It’s not hard to understand why They/Them gave in to the temptation of low-hanging fruit – there’s literally a “slash” in the title, so it’s kind of obvious to turn the story into a slasher. Nevertheless, some ideas sound better than they really are, and the introduction of slasher elements actually takes the focus away from the critical conversation They/Them is trying to have about everyday genre violence. Instead, we end up with a half-baked slasher that includes dumb protagonists splitting up against all reason, a killer who’s capable of magically disappearing in the woods, and even a villain making a speech to explain their motivations that only muddles They/Them’s message.

Despite its obvious flaws, They/Them is still worth a watch, mainly because of the sensitivity with which the filmmaker presents the fears and joys of LGBTQIA+ people. It’s no easy feat to introduce a huge cast of characters in a short runtime and still make us care about all of them, but Logan does exactly that. Additionally, the movie exposes the gruesome history of real conversion camps, underlining how inhuman it is to force other people to change their genre identity or sexual orientation. Even so, They/Them fails as a horror movie by reusing tiresome slasher clichés that are neither scary nor original. Worst of all, it makes the movie abandon subtlety for a very on-the-nose moral lesson that doesn’t make much sense. If only they could have axed the slasher bits out of the movie, They/Them could have been brilliant instead of messy.