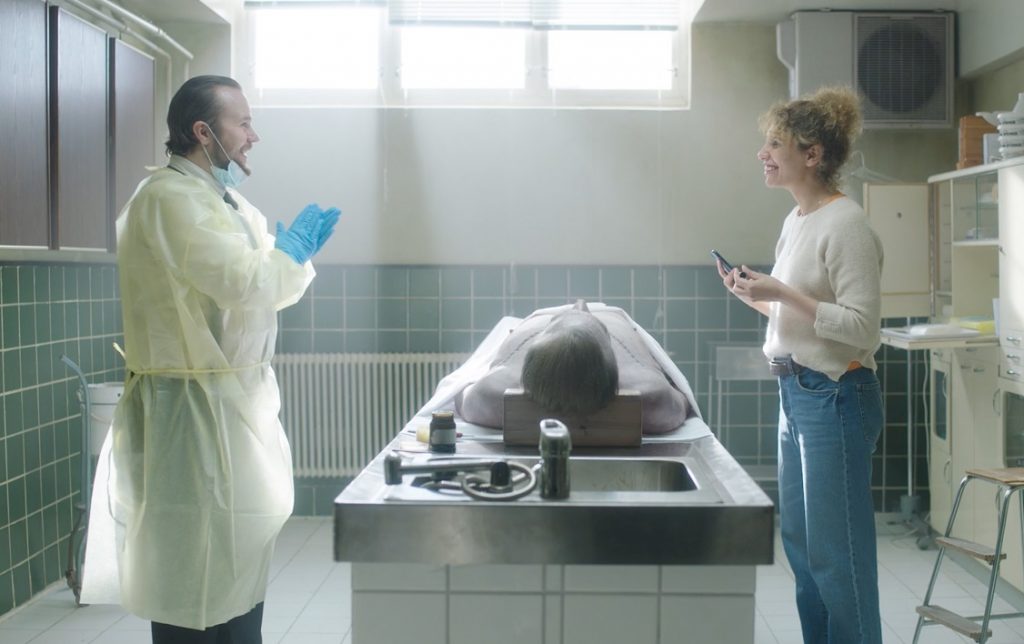 Coming to Netflix on 25th August, Post Mortem: No One Dies in Skarnes is a vampire comedy-drama, the third Netflix title to come from Norwegian production company Motion Blue. For me, it definitely leans more toward drama than comedy, delivering an interesting and entertaining story of a girl who’s desperately trying to keep her newfound transition to a vampire secret from her close family and friends.

The show is set in the Norwegian town of Skarnes and begins with Live Hallangen (Kathrine Thorborg Johansen) being declared dead. Her body was discovered lying in a field by police officers Reinart (André Sørum) and Judith (Kim Fairchild), who do not initially suspect foul play but send her body off for an autopsy all the same. Hours later, just as Live is about to go under the knife, she suddenly wakes and is feeling absolutely fine. After receiving the all-clear by the doctor, she is sent home, much to the relief of her brother Odd (Elias Holmen Sørensen) who, along with father Arvid, runs the local funeral parlour. Deaths in Skarnes are rare these days, and the family business is struggling to keep afloat, but having to arrange a funeral for a close family member is the last thing they want.

Live returns to work, as a nurse in a care home. She seems perfectly fine, laughing and joking with one of the elderly patients she cares for. But as she attempts to draw a sample of blood for testing, Live is overcome with dark, intense urges. Taking herself off to the bathroom, Live cannot stop herself from sucking on the splash of blood that landed on her uniform during the commotion, and it calms her down, giving her skin and eyes a healthy glow. Later that night, overcome again by a lust for more blood, Live sneaks into the care home and returns to the room of her patient in order to try and get a bit more than just a drop this. All without drawing the attention of the night staff.

This sets the scene for much of what happens throughout the series. As Live attempts to come to terms with these strange new urges, she tries to keep everything secret from her family, while finding herself getting deeper and deeper into increasingly difficult situations. The police continue to show an interest in this woman who came back from the dead, and the mysterious happenings now occurring around town, so Live is forever trying to cover her tracks and remain one step ahead of them. There’s also an interesting subplot involving Odd and his partner Rose (Sara Khorami) as he tries to keep the fact that the bank is set to repossess their home a secret for her. Could the introduction of a monstrous killer into the family help drum up extra business for the funeral parlour?

Although billed as a comedy-drama, the comedy in Post Mortem isn’t the kind of wacky hilariousness that you’d find in something like What We Do in the Shadows or Santa Clarita Diet. It’s more like amusingly subtle character interactions and an almost sitcom level of setups as Live finds herself in situations that spiral way out of control, to the point that you’re certain she’s going to get caught out. At times, it is a bit of a slow burn, but then it will brilliantly build to something which made me shout WTF at the TV, just before Live uttered the exact same words!

The revelation that Live’s deceased mother suffered the same affliction as she now does, along with the discovery that there are people within the community who are aware of it and are trying to keep it contained and controlled, certainly adds another interesting layer to the story. The series does manage to end by tying up some of the story strands, but not the most important ones, and is definitely a show that I’d welcome another season of.