The Witcher: Nightmare of the Wolf 2021 Movie Review
Skip to content 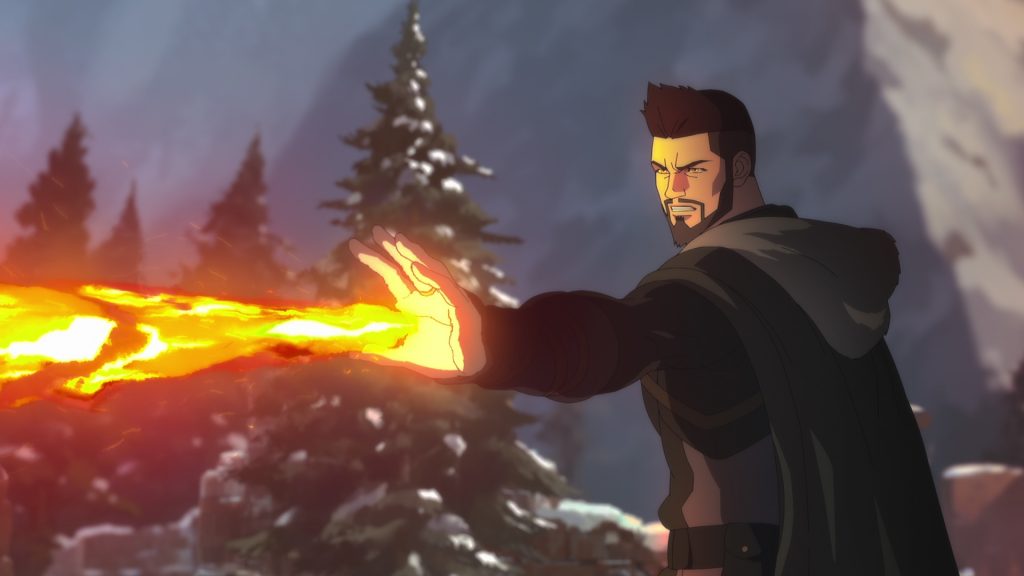 The Witcher: Nightmare of the Wolf 2021 Movie Review

Don’t tell Geralt, but Nightmare of the Wolf goes where The Witcher fears to tread. Netflix’s animated feature-length prequel comes from one of the main show’s staff writers, Beau DeMayo, and the animators over at Studio Mir (The Legend of Korra). And while the movie may wobble during its final moments, the journey there has a vigor that, even on his best day, Henry Cavill’s monster hunter fails to match.

Set decades before The Witcher, Nightmare of the Wolf introduces a new lead, Vesemir, a witcher who hones his craft at the School of the Wolf’s ancestral home at Kaer Morhen.

A simple slaying job for Vesemir (voiced here by Theo James, while The Bridge’s Kim Bodnia will portray the live-action version of the character in The Witcher season 2) snowballs into a grander plot filled with intrigue and machinations that envelope a nearby kingdom. At court, firebrand mage Tetra (Lara Pulver) and the more progressive Lady Zerzt (Mary McDonnell) hold the king’s ear amid rising tensions and monster attacks. Inevitably, eyes soon dart towards that which they don’t understand: the witchers at Kaer Morhen.

It all culminates in a series of showdowns and shock revelations that will likely reverberate across the franchise. This isn’t a throwaway adventure by any means. It bolsters Vesemir’s standing in preparation for his live-action bow, while offering a more tragic tinge to the origin of the witchers.

The story, though, tends to meander in places – mostly due to the fact the Witcher franchise can’t help but to dabble in multiple timelines. Nightmare of the Wolf is more streamlined than the main series, which told a decades-long, sprawling tale featuring multiple main characters. There are just the two stories here: Vesemir as a child training to become a witcher, and an older, cockier Vesemir in pursuit of some coin, wine, and a warm bed.

The majority of the action, mercifully, sees Vesemir cutting down creatures in his prime, and the story soon heads into a more familiar world of politics and monsters. Once again, they don’t make for good bedfellows.

Nightmare of the Wolf ultimately devolves into a pretty tired third act that leaves behind the movie’s strengths – namely, Vesemir energetically bouncing off the motley crew of witchers and mages – in favor of a soulless conspiracy involving characters even the film rarely cares for. However, the bulk of the story comes equipped with a surprising amount of heart and emotion.

In that respect, it comfortably one-ups its live-action big brother. Geralt’s trysts with Yennefer felt unearned at times; here, Vesemir’s own relationship with former maid Illyana carries with it some more profound chemistry across multiple heartfelt scenes.

Less engaging is the trip back in time to his younger days undergoing the infamous Trial of the Grasses (essentially a more hands-on version of Harry Potter’s O.W.L.s) to prove his mettle. He’s joined by Deglan, a gruff, more Geralt-like figure who shows him the ropes. Sadly, he never strays outside the realms of one-dimensional mentor in one of Nightmare of the Wolf’s few real disappointments.

Elsewhere, the other early scenes with Illyana are well paced – but the movie quickly starts looking at its watch and rattles through some of Vesemir’s more important training at the hands of the witchers. Despite that, the 80-minute movie wisely positions Vesemir as the lead around which everyone (and everything – including the monsters) must gravitate.

Vesemir is everything Geralt isn’t. He’s affable, magnetic, and charming to a fault – with his silver tongue often getting him into (and out of) sticky situations. That even includes several clashes with the creatures lurking in the shadows – which rank among the best parts of Nightmare of the Wolf.

Vesemir, and the movie itself, doesn’t pull any punches. Where The Witcher fumbled its way through CGI scraps, and can count only one legitimately great fight – the duel with Renfri in the premiere – among its trophies, Nightmare of the Wolf’s animation imbues the world with serious life across multiple skirmishes. The animation does literally stutter in places, but Studio Mir’s visual flourishes highlight a team that has a serious eye for the unique mix of grace and grit that sets the witchers apart from the knights and mercenaries-for-hire of the world.

But be warned: the blood, guts, and gore will be too much for some to stomach. Couple that with some seriously skin-crawling body horror and it all amounts to clashes that are visceral – often unintentionally comical in nature – with decapitations galore.

Witcher fans will also be pleased to find out just how much Nightmare of the Wolf broadens the world’s bestiary. Leshens, wraiths, and a handful of other nightmarish oddities plague the forests and caverns dotted throughout Vesemir’s travels on The Continent. The end result is a world that is far more lived-in than the sparse, often cold affairs of Geralt’s town-to-town travels.

The Witcher: Nightmare of the Wolf is better than Netflix’s live-action series. While it’s by no means perfect, it hints at a smart evolution of a franchise that’s learned the right lessons from Geralt’s debut. It’s scarier, slightly more focused, and feels like a living, breathing world – monsters and all. On this basis, we can’t wait to see more of The Continent.

The Witcher: Nightmare of the Wolf 2021 Movie Review