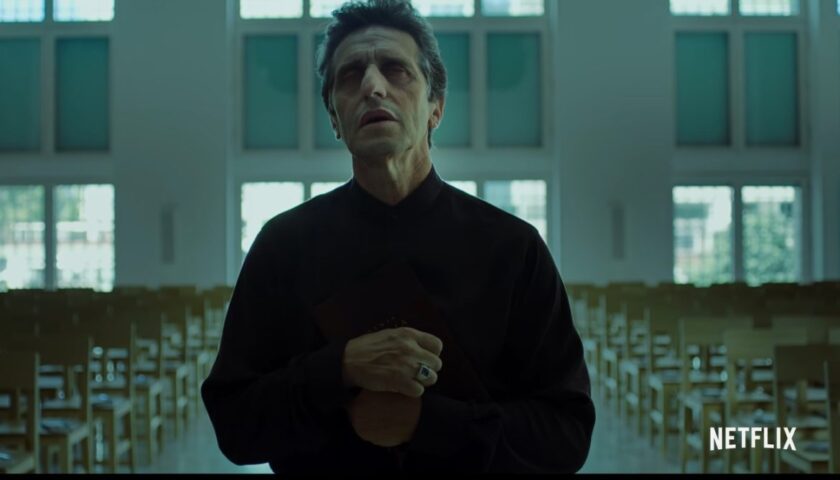 This phrase, said by one of his characters, could be the terrible synthesis of this series. As in a sort of prequel to The Handmaid’s Tale (the series and the book) or the novel Submission, by Michel Houellebecq, we are facing a dystopia that raises the possible arrival of a religious leader to a Latin American government. A scenario where in this case the neoliberal establishment closes ranks with religious fundamentalism; two nightmares made one

In the act of presentation of the presidential formula of a coalition headed by a neoliberal candidate for president and a vice who is the leader of the most powerful evangelical church in Argentina, the presidential candidate is assassinated. This is the trigger for a series that investigates the motives for the murder and the plot of interests behind that coalition.

Put into the mouth of an important character, this phrase is a powerful synthesis of this ambitious dystopia by Marcelo Piñeyro and Claudia Piñeiro, a political thriller that puts the lens more on the religious leg of the coalition than on that of its neoliberal partners and that, by way of advance, I will say that it goes from less to more.

The kingdom is not a series for the impatient; it goes from less to more. It is ambitious and you have to give time to the development of its subplots and its characters, to better understand them, their links and what they represent, overcoming the initial negative feeling of being in front of a fragmentary structure and characters apparently without psychological thickness that act as mere chess pieces from a script, as in many Spanish police officers. Fortunately, the feeling is dissipating as the chapters go by.

The character gallery is extensive. In the first place, the family that commands the Church of Light, made up of Pastor Emilio Vázquez Pena (Diego Peretti) and his wife Pastora Elena (the true leader of the congregation, led by Mercedes Morán) and the three children of the marriage, with different functions in its structure: Magdalena (Victoria Almeida), Pablo (Patricio Aramburu) and Ana (Vera Spinetta) who are joined by Oscar, the husband of the first (Alfonso Tort). The evangelical team is joined by Julio Clamens (Chino Darín), a kind of legal representative of the Church and Emilio’s trusted person, and two people in charge of a children’s and youth home supported by the Church: Tadeo (Peter Lanzani) and Remigio (Nicolás García Hume ) and one of the inmates of the home.

On the other hand, we will meet Rubén Osorio (Joaquín Furriel), an obscure and unscrupulous political operator, campaign manager, and political owner of the coalition.

Finally (and without exhausting the list), the legal leg of the story has the prosecutor Roberta Candia, in charge of the murder investigation (Nancy Dupláa), her assistant Ramiro (Santiago Korovsky) and the Attorney General (Alejandro Awada ).

The structure of the plot

The structure is fragmentary. The timeline that begins with the murder alternates with flashbacks that describe the history of some characters and the way they met and bonded. Therefore, the protagonism of the characters registers variations throughout the chapters and it is necessary to be patient to tie the ends of a plot that at the beginning is fragmentary, dispersed and generates many questions. This causes several characters to be psychologically flat at first and take a long time to take on dramatic thickness (although not all of them achieve it).

The script and the dialogs

The script, with its ingenious puzzle structure, brings together common ingredients and characters in political thrillers, but the combination of political and religious factors gives it an original specificity. On the other hand, the identity of the murderer is known almost from the beginning, so the enigma will be centered on his motives.

On the other hand, I consider that the main flaw of the series is its dialogues, which in many cases are routine, without flight, as well-listened to. They reinforce the initial sensation of being before characters without thickness that act as mere chess pieces of a script, as it happens in many Spanish crime series. Fortunately, the feeling is dissipating as the chapters go by.

The characters speak clearly “in porteño”, but localisms and swear words are avoided. Some would have been useful to reinforce the dialogues.

In relation to what I pointed out above, in the first half of the series the actors and actresses do what they can with these dialogues and with that fragmentary structure that delays the development and growth of their characters and of empathy towards them on the part of the viewer.

That said, there are performances that are more prominent than others. The soulless and cold pastor Elena is carried out with great solvency by Mercedes Morán; You have to even look at how she stands and how she walks, how she behaves in public and how in private. Peretti’s performance is uneven; he does best on the sinister side. The layers of the villain incarnated by Furriel are being very well revealed by the actor, in one of the fastest growing characters. Chino Darín is more than just a pretty face and Vera Spinetta needs to improve some diction problems. Nancy Dupláa gives her prosecutor a suitable gray tone, trying to strip her of heroism. Lanzani and García Hume are noteworthy, who get along very well with their characters.

All the secondary ones are very good. Almeida and Tort compose a very timely comic relief in a series that is almost completely devoid of humor.

The kingdom tries to reflect two faces of evangelism: on the one hand, the institutional one, linked to business and in part to political ambition as a way of expanding the scope of its dogmas on society. You do not see a development regarding the origin of that money, although you do see its management; the Pena family is a clan and the Church of Light is a true family business. However, it is interesting to note that, despite its businesses and ambitions, the religiosity of some of its members is not necessarily questioned. In this sense, Argentine history has had deeply Catholic genocides, for example.

On the other hand, the series shows us a popular religiosity, a base and supportive evangelism, although linked and eventually in conflict with the institutional one, which ventures with a mystical vein. Clearly, then, The Kingdom does not question religion or faith.

The political-ideological side is curiously the least commented on in the series. Perhaps because it is (for now) much less developed than the religious one, but it is very clear that we are facing a neoliberal project, clearly exposed in some speeches, in the actors and methodologies put into play and even in the name of the fictional political space. It remains to see who his opponents would be. Being clear about this I think helps to correct the initial general impression of an anti-political bias in the series.

They are first class. The montage is effective, in such a way that it offers successful scenes of suspense and ensemble. The same can be said for camera locations and direction.

The message and conclusions

The series, in its internationalist zeal, in almost all its course avoids direct allusions to its location; but at some point it is clear that it takes place mainly in Buenos Aires, Argentina.

At the real level, surely Brazil is closer to the state of affairs posed by the series. But as in The Maid’s Tale (the series and the book) and also in the novel Submission, by Michel Houellebecq, we are facing a dystopia that raises the possible arrival of a religious leader to a Latin American government. A scenario where in this case the neoliberal establishment closes ranks with religious fundamentalism.

A series that leaves us asking some questions: What would await a Latinoamerican country if a similar coalition were to conquer power (a story that, in part, we already know)? What would your opponent be like?