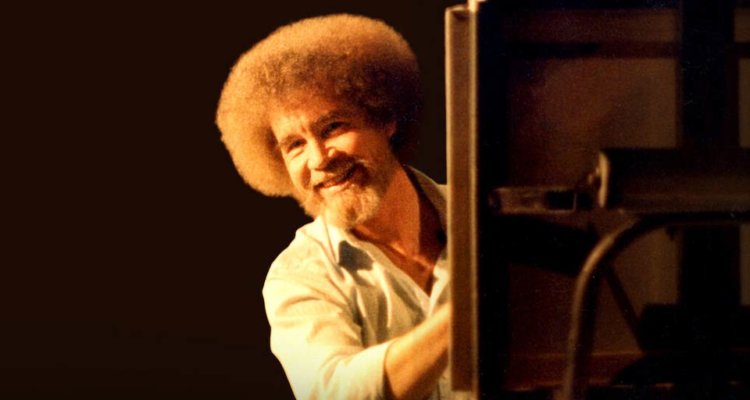 Last week, Netflix dropped a cryptic trailer for its new Bob Ross documentary. “We want to show you the trailer for Bob Ross: Happy Accidents, Betrayal & Greed,” the trailer proclaimed in bold white lettering over black, accompanied by ominous music. “But we can’t.”

Those theatrics, paired with the film’s provocative title, are obviously meant to stir suspicion that one of the world’s most un-problematic favorites has a sordid past. And Netflix viewers are waiting with bated breath for the documentary to release on Wednesday: Is Bob Ross about to be canceled?

The answer, thankfully, is no. Bob Ross: Happy Accidents, Betrayal & Greed is not the hit piece it hinted at in order to get your clicks. Ross comes out of the movie every bit as beloved as he was going in, if not more so. And really, there was no need for the marketing bait, because Joshua Rofé’s documentary is fascinating and heartbreaking enough on its own. For those of us who have found serenity in watching the mild-mannered painter over the years, it’s painful to listen to his son, Steve Ross, recount the ways he feels Ross’s business partners, Annette and Walt Kowalski, essentially screwed the painter and his family over.

The story actually broke a few months ago, thanks to Alston Ramsay’s reporting for a Daily Beast piece published in May 2021. While Ramsay’s article paints a nuanced picture of savvy business sharks eventually stabbing each other in the back—with some of the stabbing done by Ross himself—Happy Accidents places the Kowalskis firmly in the villain role, with Ross as the innocent victim. The big get, and the backbone of the film, is an interview with Ross’s son Steve. The Joy of Painting viewers may recall seeing young Steve painting happy little trees and mountains alongside his father in his occasional appearances on the show. A much older, grimmer Steve warns Rofé that it will be hard for the filmmaker to find people willing to speak to him. “What they did was shameful,” Steve says.

The gist of the mystery is this: Bob Ross, Inc., which is now run by Joan Kowalski, the daughter of Ross’s former business partners, owns the rights to everything under the Bob Ross name. The includes reruns of The Joy of Painting, the Bob Ross paint supply line, and your roommate’s Bob Ross coffee mug. None of the profits, according to the film, have gone to the Ross family, despite Ross’s deathbed intentions. That’s thanks to a series of lawsuits filed by the Kowalskis shortly after Ross’s death, something they apparently like to do often. Lawsuits, that is. We’re told that dozens of would-be interviews for this film turned Rofé down, or backed out at the last minute for fear of being sued.

In addition to Ross’s son, those who didn’t back out include his first wife and Steve’s mother, Vicky Ross; Ross’s friend and fellow artist John Thamm; Ross’s close friend Dana Jester; Ross’s Joy of Painting director Sally Schenk; Ross’s friendly rivals and floral painters Gary & Kathwren Jenkins; and more. We get a crash course on Ross’s professional rise as a painter to eventual TV star, thanks to his ability to master “wet-on-wet” speed painting, which he learned from German painter Wilhelm “Bill” Alexander. We also learn a little something about who Ross was when the cameras weren’t rolling, which his son and friends say was fairly close to his on-screen attitude. “The Bob you see on TV is pretty damn close to his real attitude,” Steve says.

That said, while Rofé shows you the Ross that everyone wants to see—the one who befriended foxes and nursed squirrels back to health and brought a smile to every aspiring painter’s face—he leaves room for another side of Ross, too. “He could be ornery,” Ross’s director Sally Schenk admits at one point. He was also a “flirt,” she added. Ross’s now-iconic sultry whisper was, indeed, an attempt to sound sexy and sensual, his son said. Though not explicitly stated, the film not-so-subtly hints Ross cheated on his first wife, which the Daily Beast report confirms. It’s less cagey about Ross’s affair with Annette Kowalski—confirmed frankly by Steve, though denied via an end-credit note by Annette—which supposedly fractured the friendship between the Rosses and the Kowalskis for good.

The film is at its best, and also its most heartbreaking, when it reflects on the death of Ross’s second wife, Jane, due to cancer, and his own cancer diagnosis that came shortly after. Ross died due to complications from lymphoma in 1995; he was only 52. His young death may come as a surprise to many viewers, and according to Steve, this is not an accident. He recalls his father arguing with the Kowalskis while he was sick. “They’re trying to steal my name,” he remembers his father saying.

The frustrating thing about Happy Accidents is that the most bizarre and confusing parts of the story—a rushed deathbed marriage, last-minute estate changes, and Steve Ross’s suit against the Kowalskis—are crammed into the film’s final minutes, and presented without much useful context. It leaves viewers with more questions than answers. Still, it’s both fascinating and saddening to know that the man who made such happy little trees was surrounded by dark clouds in his final years of life. You may want to think twice before you buy that Bob Ross Chia pet.