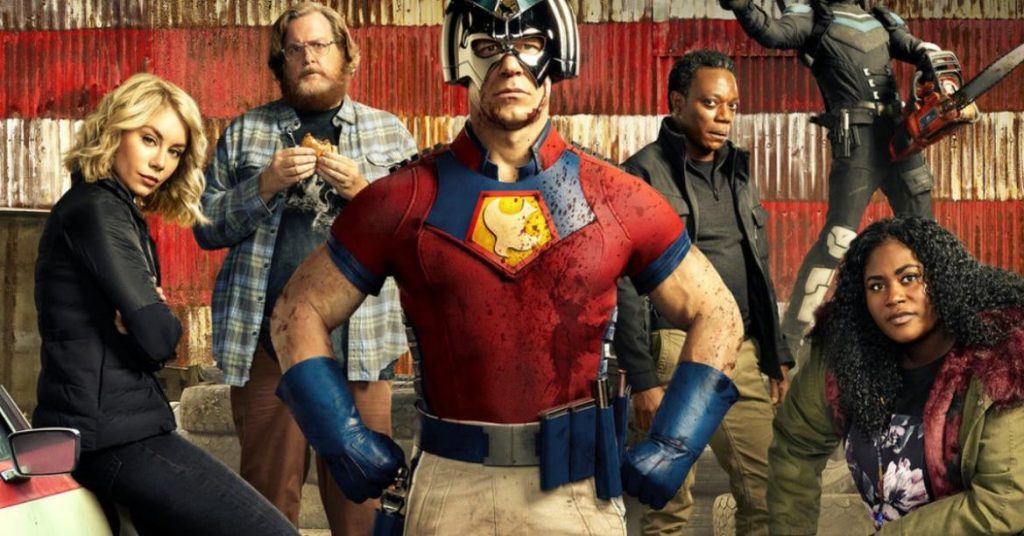 In many ways, Peacemaker feels like a show that only James Gunn could make — irreverent, unexpectedly heartfelt, and revolving around a motley crew of societal misfits who reluctantly band together in pursuit of saving the world from a global-spanning threat. If those themes sound at all familiar, it’s in part because this is a series spawned from the aftermath of 2021’s The Suicide Squad — in which the merciless, jingoistic killer known as Peacemaker (birth name Christopher Smith), played by John Cena, gets plucked out of prison by A.R.G.U.S. H.B.I.C. Amanda Waller (Viola Davis) and paired off with other notorious criminals for an overseas mission the likes of which they’re not intended to come back from. Over the course of the DC movie (which Gunn wrote and directed), it turns out that Peacemaker has been given a secret mission of his own: to cover up the U.S. government’s involvement by any means necessary. Several of the remaining Squad members come to blows, resulting in Peacemaker taking a bullet through the throat courtesy of Bloodsport (Idris Elba) — but a post-credit scene reveals that the vigilante is alive and well, albeit pretty banged-up and the HBO Max series (with Gunn returning to write every episode) picks up a few months later, with Peacemaker believing (at least for the moment) that he might be able to sneak out of the hospital, and the rest of his prison sentence by extension. Of course, we soon discover that it’s not as easy for Peacemaker as simply walking away from crime — but what proves to be even more disheartening about the character’s spinoff series is that it seems compelled to walk back every unapologetically cold-blooded aspect that made Cena so entertaining to watch on-screen.

Who could forget Peacemaker’s debut in The Suicide Squad, in which he, without prompting, declared that he cherished peace with all of his heart, only to add, “I don’t care how many men, women, and children I kill to get it”? The character who looked like he’d stepped off the page of a Silver Age-era comic book, shiny chrome helmet and all, only to introduce himself as one of the douchiest aspects of an already delightful DCEU film, made for someone audiences could love to hate (and hate to love even more). A good portion of that conflicted feeling is conjured by Cena’s natural comedic chops, as well as his uncanny ability to deliver the most inane dialogue with a completely straight face — and those aspects are still on full display in Peacemaker, no question, but with those strengths comes the show’s addition of bad guys who are arguably on much lower ethical ground, resulting in an unfortunate morality shift for its lead. Peacemaker’s biggest internal journey therein becomes wrestling with what it means to be a supervillain, and whether he even wants to be straight-up murdering people anymore. It’s a redemption arc that would be welcome if not for the fact that it feels like such an about-face, a complete 180-degree turn from the dick we first met less than a year ago — especially since there are other supporting characters who can and certainly do serve as his more honorable foils throughout the season.

The most compelling among them is Leota Adebayo, played by Danielle Brooks, who joins Peacemaker’s new crew led by Clemson Murn (a dryly humorous Chukwudi Iwuji) and finds herself in an unexpected position to somewhat wrangle him but also witness him at some of his most vulnerable moments. She’s his polar opposite in every way, a Black woman who doesn’t really have much of a stomach for killing, which presents an intriguing dilemma for her to grapple with over the course of the show’s story and becomes part of an intriguing mystery all its own, namely: who was responsible for making her part of this team in the first place? The group is rounded out by several familiar faces from The Suicide Squad, including Steve Agee‘s John Economos, equally as glued to a computer screen here when he’s not exchanging amusing tete-a-tetes with Cena, and Jennifer Holland‘s Emilia Harcourt, who gets a few chances to do some brutal ass-kicking but does fall prey to the reducing character trope of being frequently put up on a pedestal for her looks by many different men when all she wants is to be taken seriously in her profession. There’s also Vigilante, played by Freddie Stroma, who seems to take particularly gleeful delight in committing violence — so much so that he almost makes Peacemaker look like a pacifist by comparison.

And therein lies the biggest issue with Peacemaker — the show stops just shy of going full-throttle in terms of its lead’s worst character traits, only to end up assigning them out to other, more despicable presences. His capacity and willingness to take out whoever he (or the government) deems necessary gets shuffled over to Vigilante, while Peacemaker’s extreme nationalism is handed off to his own father, personified with disguised menace by Robert Patrick. Fans of the comics will know that the character has his own inarguably terrible history, and while that is explored to an extent, the show’s overarching theme of shitty dads feels like Gunn playing a version of his own greatest hits, albeit a less memorable one. Other story threads involving minor characters are relatively half-baked in execution; Nhut Le‘s Judomaster mostly appears for the twin purposes of beating people up and snacking on Flamin’ Hot Cheetos. Even Peacemaker‘s biggest end-of-the-world-stakes plot seems like more of an afterthought dropped in amidst all of the intimate, character-driven storylines, which are significantly more engaging if not always emotionally impactful.

As the first potential spinoff devised from The Suicide Squad, Peacemaker is definitely a less bombastic series, dealing more in relationships than action overall, but it would have also proven more successful if it wasn’t so focused on trying to render its lead more likable. It’s possible he may have been too good a villain in his first appearance, because the series itself doesn’t serve as enough road for him to fully change course in a satisfying narrative way. There are intermittent shining moments, briefly-glimpsed reminders of how Gunn can also thrive in the earnest elements within exaggerated, comic book-rooted comedy — and of course, the soundtrack undeniably slaps. (Good luck getting the opening theme song out of your head after you first hear it.) But what makes Peacemaker such an interesting and compelling character is his unrepentant awfulness, and the series choosing to back-pedal on what could be considered his defining traits only makes for an aggressively fine follow-up.