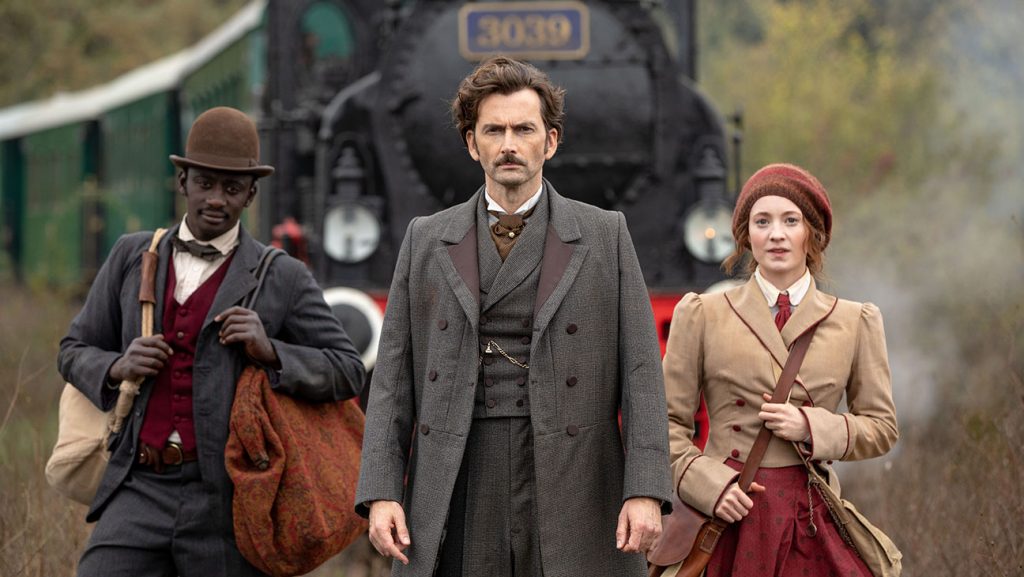 The new series Around the World in 80 Days, starring David Tennant, premiered on the BBC in the U.K. on December 26, and will be shown on Masterpiece for PBS in the U.S. on January 2, 2022. Created by Ashley Pharoah (Life on Mars) and Caleb Ranson (Child Of Mine), this eight-part series is a lavish adaptation of Jules Verne’s classic.

Around the World in 80 Days opens in London in 1872. Phileas Fogg (played by David Tennant), a wealthy Englishman, bets that he can circle the globe in 80 days, after being mocked by one of his fellow members at the Reform Club that he would never be able to do such a thing, let alone leave London. The wager is for the sum of £20,000. Phileas, on his way home to prepare his journey immediately, hires a new valet, a Frenchman named Passepartout (played by Ibrahim Koma). He is followed on his journey circumnavigating the globe by young journalist Abigail Fix (played by Leonie Benesch), the daughter of his friend Fortescue, a newspaper editor.

At a time when travel is becoming increasingly difficult, if not impossible, Around the World in 80 Days is a great period series to escape to.

It is an intriguing adaptation of Jules Verne’s story, with details and characters that have clearly been freely changed for this new version. Fix, for example, is a completely different character here. The Scotland Yard detective, seeking to bring Phileas back to Britain and arrest him, is now an aspiring female journalist wanting to make a name for herself (as in having her female name in print) by documenting Phileas’s journey.

A traumatic and political past has also been added to Passepartout’s character. The series suggests that Passepartout already travelled the world to escape the trauma of losing his father, who was a French revolutionary. Back in Paris, Passepartout reunites with his brother and finds himself embroiled again in the country’s politics—the very thing he sought to escape.

The series portrays Phileas as quite a pathetic character, especially in its first episode. The episode opens with Phileas receiving a postcard with a single word written: “Coward.” It quickly becomes clear that this is what his entourage thinks of him. Once he arrives in Paris with Passepartout and Miss Abigail, the city is in the midst of a riot. Phileas is left all alone by Passepartout and Abigail. He is quickly attacked by rioters, largely just children, who steal all his luggage. He is rescued by a nun, who promptly asks him to give her money. Phileas is presented as a fool, not the methodical and reserved gentleman described by Jules Verne. It is only by episode 2 that Phileas seems to regain his original composure, although there seems to also be a backstory concerning Phileas awaiting to burst.

I loved Jules Verne’s story when I read it as child, and I didn’t mind at all the changes brought by the series. It rather adds something new and intriguing to the story. Of course, some of the incentives brought by Fix’s character will be lost, but the character of Abigail created by the show’s writers is compelling enough that I look forward to seeing how her character will develop.

David Tennant (Doctor Who, Good Omens), Ibrahim Koma (Sink or Swim, OSS 117) and Leonid Benesch (The Crown, Babylon Berlin) make a great trio, each bringing something different to their characters. Around the World in 80 Days is a Slim Film + Television and Federation Entertainment co-production for the European Alliance formed by France Télévisions, ZDF and RAI, with additional co-production partners, Masterpiece PBS, Peu Communications, Be-Films and RTBF, Daro Film Distribution.