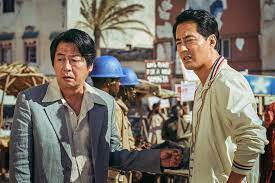 Ryoo Seung-wan’s features have some certainties to them: they will have a high profile star-cast, a high budget that will be utilised for very well-planned and accomplished action set-pieces offering thrills aplenty and, most importantly, they set out to entertain. A box office magnet, his films also tend to do a tidy amount of business and as such, his new projects are looked forward to with great anticipation. His latest, “Escape from Mogadishu”, from its promotional campaign looked set to be in the same grand scale that Ryoo adapted in his previous work “The Battleship Island” and an audience devoid of a similarly grand production over the last few months ensured that it opened to huge numbers in the local theatres.

It’s 1990 and both the Koreas, still struggling to get membership at the UN General Assembly, have taken to the African continent, who then held the most votes in the UN, to lobby for the same. In Mogadishu, the Somalian capital, the efforts from both nations were particularly focused because of the country’s important vote. South Korean ambassador Han Sin-sung and his North Korean counterpart Rim Yong-soo, along with their “councillors” (in reality intelligence officers) Kang Dae-jin and Tae Joon-ki respectively, are both trying to get the upper hand over each other when the city erupts in a civil war. Holed within their embassies and cut off from electricity, communication or security, the people of both the countries must put their differences aside and unite to escape the battlefield that the city has become.

If there is one thing that Ryoo Seung-wan never fails to do, it is to entertain his audience and “Escape from Mogadishu” does just that in a number of effective ways. Firstly, the emphasis here his not on world politics. The situation in Mogadishu at the time, of course, was shocking enough and the feature’s depiction of it is realistic enough to be both horrifying and impressive in its realisation. But most of the narrative’s efforts are focused on painting the ghastly situation that the characters find themselves in and on their subsequent efforts to find a way out of it.

While it does, as expected, stress that there was no love lost between the North and the South, Ryoo aims to keep things flowing and includes a number of action sequences, including everything from riot scenes, tense stand-offs and glorious car chase sequences that can rival some of the best out there. The scenes where the South Koreans come face-to-face with the Somalian police, for example, are tensely executed. The action set-pieces benefit greatly from Choi Young-hwan’s outstanding cinematography, particularly in the feature’s electrifying centrepiece car chase sequence involving the group’s escape from the embassy and from Lee Kang-hee’s editing, which helps accentuate the action and highlights the franticness of the events depicted.

However, on a level, one can’t help but shake the feeling that “Escape from Mogadishu” seems exploitative of a very dark period in the African country’s history, one that the country is, even today, struggling to fully recover from. The feature concentrates largely on the Koreans’ plight and their daring escape, but the fact that it never aims to address these issues goes against it, as does the typecast nature of any and all Somalian characters. Ryoo also succumbs to the jingoism that was present in his previous feature “The Battleship Island”. In a narrative of such nature, this is to be expected but Ryoo’s treatment of it seems almost a remnant of the past in its execution, as many productions have since done it in a far more effective and understated manner.

The Korean characters though are in the safe hands of very able actors and the cast, as expected, gives very strong performances. Kim Yoon-seok and Jo In-sung share a good camaraderie and play off each other surprisingly well for two big actors working together for the first time. Heo Jun-ho has the face and personality about him that works well for the authoritative North Korean ambassador and his weathered face expresses the pain of extending a hand for help to the South Koreans, is expressed very subtly. Both Kyoo Kyo-hwan and Jo In-sung show the required physicality for their respective intelligence officer roles, with their fight being a rare if short and welcome change from the guns and blasts of the action elsewhere.

Despite its few shortcomings at the script level, “Escape from Mogadishu” is yet another exhilarating thrill-ride from South Korea’s master of action blockbusters, one that has enough to keep the genre fans happy, in addition to telling a lesser-known story in a manner that should work well with the masses.