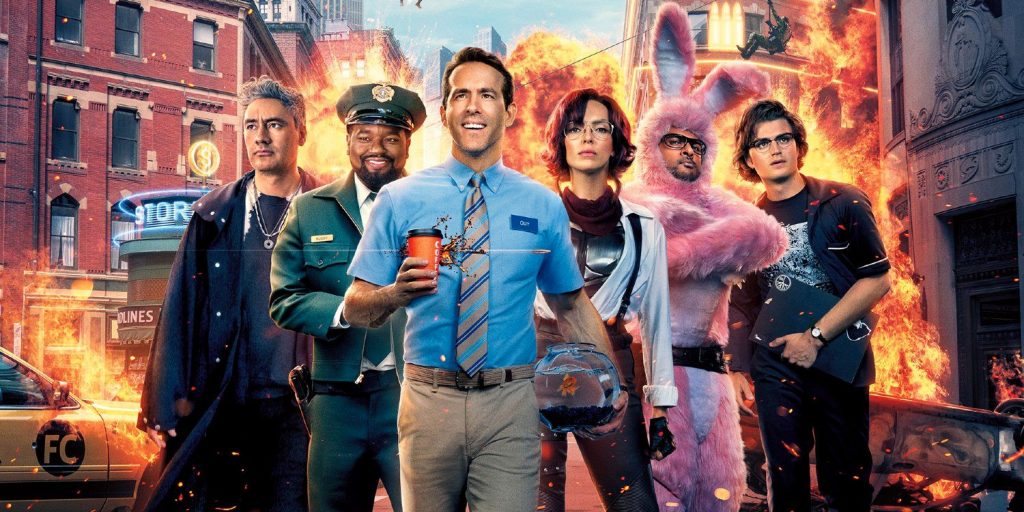 The concept for “Free Guy” feels like a classic elevator pitch: Guy (the main character’s actual name) is a workaday Joe who feels something is missing from his life. When a charismatic, would-be love interest enters his hermetic sphere, he falls hard for her, setting off a chain of events that forever change his world.

Sound familiar? It should. “Free Guy” swipes whole patches of theme, plot and character development from dozens of other titles but, to the credit of screenwriters Matt Lieberman and Zak Penn, rarely groans at the stitches. That instant familiarity works for and against the film, injecting it with the rabbit-hole exploration of “The Matrix,” the comedy-romance of “Groundhog Day” and the philosophical-primer beats of “The Good Place.”

Ryan Reynolds, who also produced the film, plays yet another version of his beloved Deadpool character here — snappy, oddly crude at times and always bouncing back from the latest punch. It’s a winning combo as set against the backdrop of Free City, the violent, hyper-realistic video game that’s inspired by open-world franchises such as Grand Theft Auto.

The problem is that Guy is an NPC, or non-playable character, programmed solely to provide background texture. As a bank teller, he’s doomed to repeat an endless loop of aggro avatars robbing his workplace while maniacally filling his co-workers with bullets.

The larger environment, in fact, is rife with rattling tanks, exploding space ships, martial arts fights, car crashes and other spectacles that feel more like wallpaper than exciting action. That’s entirely intentional, and one of the film’s most damning indictments of our numbness to depictions of violence.

Enter Jodie Comer as Molotov Girl, a doe-eyed, kick-butt player whose real-life equivalent (Millie) is plumbing the game’s code for proof that developer Soonami stole it from her and former coding-partner Keys (Joe Keery from “Stranger Things”).

In the real world, Keys is an underling at Soonami, despite his “MIT brilliance,” and is slowly realizing that guru Antwan (director and actor Taika Waititi) is up to no good just before Free City 2’s launch. As Reynolds’ Guy becomes self-aware — thanks to his burgeoning artificial intelligence and a pair of symbolic sunglasses — the real and digital worlds clash.

Magnetic actors are in no short supply here, but Utkarsh Ambudkar (as the company-line-towing Mouser) and Lil Rel Howery (as Guy’s friend/bank security guard Buddy) stand out. Soonami’s Antwan, however, feels like a cardboard version of a tech-bro, talking almost exclusively in awkward pop-culture references and wasting Waititi’s honed, deadpan sarcasm. Comer, however, has enough star power to carry the film and will likely get many more big-budget offers after this.

Viewers needn’t be intimate with video-game conventions to appreciate the jokes, but it helps. There’s truth in the movie’s repeated point that artists and designers can inject their soul into digital projects, despite the seemingly cold, binary world of ones and zeros. Real-life connections can be made online, and algorithms aren’t always just manipulative means to a data-mining end.

However, “Free Guy” at times seems to think it’s “Inception” or “WandaVision,” tracing as it does the illusions of everyday life that conceal darker secrets. Its utopian ideals feel more rom-com than dramatic, but corny turnabouts also push it dangerously close to farce at times.

“Free Guy” works well as a popcorn flick that also manages to question our fealty to capitalist conformity and traditional notions of authorship. Its sweet, smiling faces and CGI baubles — including a freakish, third-act character whose sole purpose is to freak out the other characters — help blunt the recycled tone.

But as with his other projects, “Free Guy” also shows the limits of Reynolds’ charm as a leading man by, ironically, giving him just the right amount of depth. It works well as a breezy fable, and one that’s genuinely looking ahead to a brighter future.