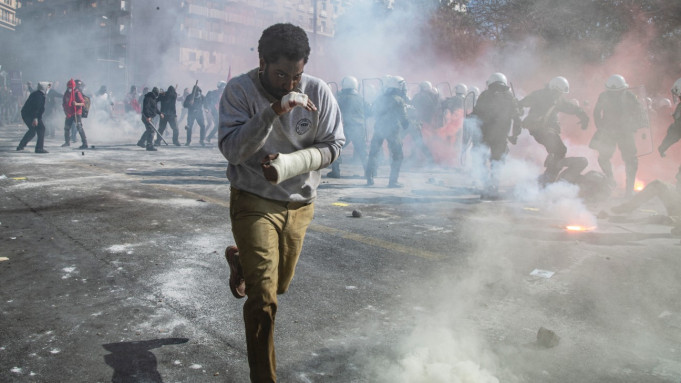 Admiration for the 1970s conspiracy thrillers of Alan J. Pakula, John Frankenheimer and Sydney Pollack is baked into Beckett, though little of the craftsmanship that made the best of those movies thrum with danger and tension. Directed with a workmanlike lack of style by Ferdinando Cito Filomarino and written by Kevin A. Rice without the required ambiguities to feed the protagonist’s paranoia, this pedestrian wrong-place-wrong-time manhunt through Greece never really sparks. And the jury that’s still out over whether John David Washington is movie-star material gets shaky evidence to support that case.

Filomarino has served regularly as second unit director on the features of Luca Guadagnino, who takes lead producer credit here and shares his key tech collaborators, notably DP Sayombhu Mukdeeprom and editor Walter Fasano. But even with a score by Ryuichi Sakamoto that mixes orchestral passages with jagged ambient distortion and bursts of unsettling percussion, Beckett is all chase, no pace. Its scenic locations from Delphi to Athens make it a decent choice to kick off the Locarno Film Festival with a Piazza Grande screening, but it’s unlikely to stand out from the streaming pack when it bows on Netflix Aug. 13.

Washington plays the title character, a tech analyst from Ohio vacationing in Greece in 2015 with his girlfriend April (Alicia Vikander). They visit the ancient ruins of Delphi and joke at a taverna afterwards about finding their own Oracle of Zeus to consult. But it’s obvious from the ecstasy overload of their swooning mutual infatuation that a devastating loss lies ahead.

Sure enough, while driving on the twisty mountain roads at night, Beckett nods off at the wheel, sending the car hurtling over the edge with April thrown from the wreck. The vehicle’s fall is broken by a dilapidated cottage, which Officer Xenakis (Panos Koronis), the cop who questions Beckett at a village hospital, assures him has been unoccupied for years. But Beckett distinctly witnessed a preteen boy being ushered out of sight by a woman as he was coming to after the accident.

When he returns to the scene days later, Beckett barely makes it out of the house alive, stalked by a female shooter (Lena Kitsopoulou) and Xenakis. That encounter kicks off a pursuit across the region as he seeks help from hunters, beekeepers and the driver of a tour bus while narrowly escaping brushes with the crooked cop and trying to reach the U.S. embassy in Athens.

He starts to make connections when he recognizes the boy in a missing person poster and learns the kid is the abducted nephew of a political candidate gaining at the polls by promising an alternative to the country’s far-right ultranationalist movement. Vicky Krieps shows up as an activist supporting the leftist candidate, who believes Beckett’s story and offers to help; and Boyd Holbrook appears during the final act as an American embassy officer whose evasive answers should alert Beckett that something smells wrong.

None of these supporting characters has sufficient definition to be interesting, leaving the burden entirely on Washington’s Beckett. The filmmakers are careful not to turn him into some endlessly resourceful fighting machine in the Liam Neeson thriller mode. But even so, for someone who has probably never seen much physical action beyond the gym, Beckett is remarkably adept at jumping off railings, rolling down mountains, running for his life and outmaneuvering trained killers — seldom slowed down by a broken arm in a sling or multiple gun and knife wounds. Washington shifts between three principal settings of shattered grief, fearful panic and grim determination, but fails to bring much personality to any of them.

Considering the amount of ground covered in the plot, this is a curiously undynamic film that struggles to inject urgency into the protagonist’s life-or-death situation. That’s also down to the sketchy outline of the political backdrop, with unrest stirred by the austerity measures gripping the economically beleaguered country and corruption at multiple levels. The closing crescendo unfolds in and around an Athens city block choked by protestors and includes an assassination, a clash between Beckett and his assailants in a labyrinthine carpark, and the usual disclosure of Americans with sticky fingers in other folks’ political business. But even with all that, Beckett still manages to end on a note of anticlimactic flatness.