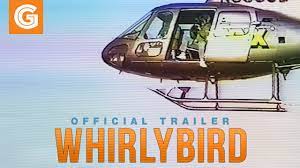 Pioneers of ‘80s- and ‘90s-era news coverage in Los Angeles, Zoey Tur and Marika Gerrard captured iconic footage of the city’s riots and O.J. Simpson’s police chase, and countless other events of the “if it bleeds, it leads” variety. Zoey, who came out as transgender in 2013, is referred to as Bob for most of Matt Yoka’s Whirlybird, and in the decades-spanning archival footage that makes up much of the film, Bob is revealed as an early adopter of helicopters as a tool of the reporting trade. (For this review, we’re using the names and pronouns that the film and interviewees use when talking about the past.)

Tired of chasing down stories across the city by car, Bob recognized that helicopters could take him straight to an event, as well as provide a master shot of a story as it unfolded in real time. This kind of footage, offering us a simulation of God-like surveillance, is intensely addictive and paved the way for the sensory overload that is today’s 24/7 news cycle.

Whirlybird shows that Bob, before transitioning, was an addict himself, craving the rush of trying to outfox everyone else out of a lurid story. Which is to say that Bob and then-wife Marika, in their role in shaping modern media discourse, effectively transmitted personal addiction to society at large. The Turs’ copter footage is intrinsic to the visual grammar of ‘90s news, and Yoka, in many elaborate montages, practically feasts on it.

Much of the material is disturbing as well as disturbingly narcotic—raw and intimate and nasty, especially the footage of the riots and civil disturbances that occurred in the aftermath of Rodney King’s beating in 1992. You see why the news channels started competing with Bob, who ran a family business on the fringes of the media trade, hustling day and night at the cost of his personal life. Yoka goes overboard at times, as repetition sets in as Whirlybird segues from one archive disaster to another, but this indulgence astutely parallels Bob’s own mania.

Interviewing Zoey, Marika, and their children, Jamie and Katy, Yoka establishes that Bob’s innovations sprung from his control-freak tendencies. The helicopters were his way of owning the news, as if he was an auteur of real life, and he wasn’t shy about verbally abusing Marika when she didn’t lean out of a copter far enough or frame a shot with the right vertical tilt. Quite a bit of this abuse is captured on film as well, and it’s unsettling to behold a gifted and driven narcissist berating a tireless woman who has followed him to the edge of his fixations with little complaint. The Turs became very successful, but Bob was an adrenaline junkie who couldn’t handle “coming down” after a big story, and he eventually stretched himself apart.

Speaking to Yoka, Zoey recollects on Bob with horror and disgust, and these sentiments don’t feel canned. Living out in the woods of Northern California, Zoey suggests a person long in recovery, having exorcised her former toxic shadow self from her essence. Yoka could’ve stood to expand on Bob’s realization that he was Zoey, and how his closeted transgenderism informed his tyrannical rage, particularly against Marika. From the point of view of Whirlybird, this development seems to come out of nowhere, and the other family members are never asked about Zoey, only the fanatical Bob. It would seem that to have an abusive man become a repentant woman would trigger, for those close to that person, all sorts of contradictory and unresolved and dangerous feelings. Yoka, perhaps cowed by the volatile subject matter, doesn’t go there, and he doesn’t even establish if Jamie and Katy have a relationship with Zoey at all. Given that Katy is now an MSBNC reporter, the family business has clearly left a mark on her.

But Yoka does vividly capture how personal demons shape creative output. Bob and Marika’s footage of L.A. in extremis is a physicalization of the former’s roiling psyche, an impression expressed by Zoey and Marika, who both suggest disaster survivors. Raised in an abusive home, Bob wanted to transcend his father’s torments only to ultimately become his father in the end—a familiar irony of which Zoey is highly self-conscious. Yet Zoey can’t entirely escape the ghost of Bob. Text at the end of Whirlybird claims that Zoey is considering returning to L.A. to get back into the news trade. Given the hard-earned tranquility of the film’s Northern California passages, this possibility suggests nothing less than a potential relapse.