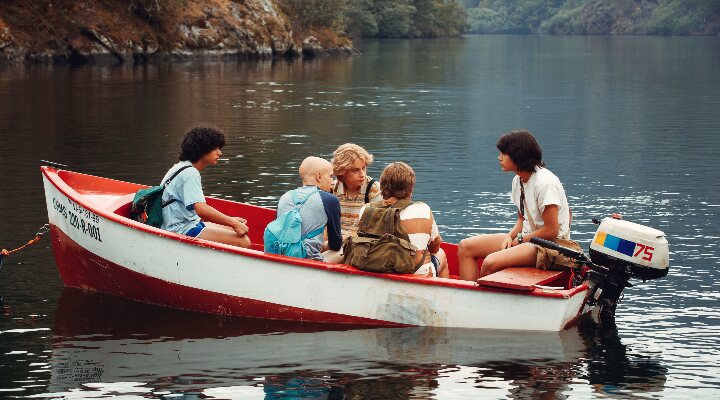 The 80s left a memory in the collective memory that has caused that evoking nostalgia is almost synonymous with going back to this decade. In the last biennium, Spanish cinema has revisited that historical moment, with a melancholic but profoundly realistic look.

Manu Gómez did it first about his childhood as a Basque of Andalusian origin in ‘Once upon a time is Euskadi’; Then came Alexis Morante, who took a look at the reality of a working-class family that returns to Campo de Gibraltar in ‘Oliver’s Universe’. Now it’s the Galician’s turn Dani de la Torre, who changes the thriller for the youth adventure with ‘Live Is Life’, with which he forms a wonderful artistic tandem with Albert Espinosa, creator of ‘Pulseras Rojas’ and ‘Los espabilados’who returns to the cinema 11 years after ‘Heroes’.

Based on some stories by Espinosa himself, ‘Live Is Life: the great adventure’ is based on a premise similar to that of the films by Gómez and Morante. Nevertheless, as happened with both titles, although the protagonists are a group of children (in this case, adolescents of 15 years), its background is very different from ‘Once upon a time in Euskadi’ and ‘Oliver’s Universe’, as it is a brighter production for narrating an adventure during the holidays, which brings together children from different parts of Spain in the town where their parents or grandparents originate.

In this case, De la Torre takes the opportunity to pay homage to his own childhood (the director is from Monforte de Lemos), with the Ribeira Sacra as the natural setting. Precisely, this area that includes the banks of the rivers Cabe, Sil and Miño is almost like the other accomplice protagonist, being a magical place, ideal for a feature film that begins with a style similar to that of the emblematic ‘The Goonies’, a film by Richard Donner originally released just in the year in which the film is set, 1985.

An endearing nostalgic look with a certain social touch

Yes indeed, De la Torre and Espinosa do not idealize a decade that was much darker than nostalgia allows it to be remembered. Decade marked by strong economic crises, high levels of crime and, above all, were the hardest years for heroin and other types of drugs, in addition to the outbreak of the AIDS pandemic, which took so many lives, erasing practically all a generation of young people who did not see a future with high unemployment rates, largely due to the significant deindustrialization experienced by several European countries, such as Spain itself.

That reality is perceived. It should be noted that ‘the bad guys’ in the film are a group of quinquis. As the most mature viewer will know, it was in the 80s when they came to the fore, being synonymous with marginal life. Beyond showing some villainous characters with whom some hard years are intuited, De la Torre and Espinosa are more explicit in a sequence that does not hesitate to highlight that yes, the 80s for children were years full of nostalgia, magic and adventure; but for the older ones it was also the period of how drugs possessed and snatched lives. That’s where ‘Live Is Life’ goes from being ‘The Goonies’ to getting closer to ‘Count on Me’.

De la Torre emerges unscathed from his jump without a net to family cinema, although ‘Live Is Life’ has certain sequences that are reminiscent of ‘The Unknown’ and ‘The Shadow of the Law’. A beautiful and realistic way to pay tribute to those ‘wonderful years’, which the passage of time allows us to look at them in a polyhedral way, because the feature film will be a return to the past for its more mature audience, but it will allow new generations to know what it was like to be 15 years old four decades ago. On the other hand, the commercial release of ‘Live Is Life’ allows you to see a different kind of experience on the big screen, away from the blockbusters but without losing that family touch that brings together different generations, which is currently almost a miracle for the delight in theaters.