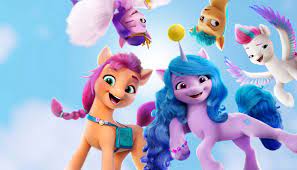 At one point in the past, Sunny Starscout and her dad, Argyle, were what you might call pony rebels. Or at least that’s how some of the other adult ponies in town saw them.

Argyle, a hornless, wingless “earth pony,” had always been at odds with the idea that pegasi and unicorns—the two other species of pony-like creatures in the world of Equestria—were nothing but arch-enemies and villains of the rest of ponydom.

Argyle thought at that time was that both groups were filled with evil magic and ready to zap or brainwash any normal pony they encountered. In fact, the popular image of a pegasus or a unicorn was so terrible that some ponies thought those two creatures might not really even exist.

But Argyle’s research showed that all of that—every frightened and hateful opinion—was completely false. Yes, they were magical, but he became convinced that in ancient Equestria their magic was used for good. And they all got along with regular ponies and promoted a unified front of friendship and community.

That’s what Argyle believed with all his heart, and so little Sunny believed it with all of her heart, too.

They just needed to prove that to the rest of the earth-pony community. “We’ll do our part, hoof to heart,” they pledged.

Years later, though, things haven’t really changed all that much. Argyle has passed on and Sunny is now a young adult pony. She’s still positive and she still tries every day to change some other pony minds, to no avail. To this day they all canter around in fear and spread all sorts of terrible falsehoods.

Then one day a cute young unicorn named Izzy saunters into town. That’s right, a unicorn! And while everyone else goes crazy with fear and runs screaming away, Sunny is the only one to step forward in awe.

Izzy doesn’t zap her with a magical horn. She doesn’t read Sunny’s mind or brainwash her into a zombie state. In fact, all Izzy does is say Hi with a beaming smile.

And Sunny realizes that they might just become friends.

Sunny and Izzy’s meeting is a long way from changing the minds of the entire world of Equestria. But it’s a start!

Unity and friendship is definitely the clarion call here. Sunny and Izzy take the initiative to go together to the land of the pegasi in hopes of finding proof that none of the pony species are magical, and gather evidence of a much more friendly past. And after meeting a pegasus princess named Zipp (and her social-media-influencer sister Pipp), the friendship pieces all start coming together.

At first this growing group of new friends believe that finding a new burst of communal magic will be key to changing everyone else’s mind about their mutual biases (the pegasi and unicorns have their own forms of prejudices about the two other species). But eventually they all discover that that can only happen when each group sees the possible kindness, friendship and truth with their own eyes.

“We can stay separated by fear and distrust or we can choose friendship,” Sunny calls out to a crowd. “We can choose love. That’s the true magic!”

Izzy eventually reveals that she was motivated to reach out to the earth ponies because of a message that Sunny and her dad sent out via a small balloon many years before (one small attempt to reach out made a difference even though they feared it never would).