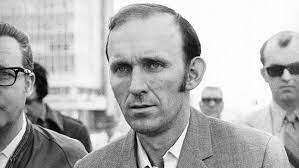 In the early ’70s, a well-dressed man boarded a small commercial plane and proceeded to hold the crew hostage for a ransom of $200,000. The man received his money after touching down at the nearest airport and the plane was promptly instructed to leave the airstrip. While in flight, and unbeknownst to the crew, the man exited from the back entrance of the aircraft and was never heard from again. Thus the legend of D.B. Cooper was born, and to this day it inspires an army of fans intent on discovering the identity and whereabouts of Cooper. Delve into the four-part docu-series DB Cooper Where Are You?! and witness one of those most entertaining documentaries that Netflix has to offer.

Maybe you know the story, maybe you don’t? Either way, you don’t need any background information heading into this docu-series. I myself knew the barest of details about the man or the event itself. What’s fascinating about this man, however, is that D.B. Cooper is one of those names in pop culture that lives in infamy. “The skyjacker who was never caught.” There have been numerous adaptations of the story and even depictions of the event featured in some popular films and series such as Without a Paddle and most recently in the debut episode of Marvel Studios’ Loki.

With all of that being said, I was surprised at the level of detail from the event of the heist itself, and the numerous theories that exist out in the world even 50 years later. Which is what makes DB Cooper Where Are You?! such a bloody entertaining trip down the conspiracy rabbit hole. The series really taps into that trope of the thrill of the chase, and it’s so easy to get swept up into it.

The show never takes itself too seriously and embraces the far-out wacky theories as much as some of the legitimate claims. Now as I’ve said I’m aware of the bare minimum of D.B. Cooper and what transpired, but, this series takes the utmost pleasure in laying out every detail as it brings you into the deep end of the cold case pool. One such tidbit was learning that the mystery man’s name was not in fact D.B. Cooper. This name originally surfaced as the result of sloppy journalism rushing to get the story to print. The hijacker’s name on his ticket was actually Dan Cooper. However, D.B. Cooper has stuck, given it has an air of unfamiliarity that lends itself more naturally to the allure of the mysterious—and the James Bond-like qualities Cooper was described as having.

The series, as much as the legend itself, is such an enticing and binge-worthy watch because it has all the makings of any great story that are almost too good to be true. A suave man in a suit hijacks a plane with a bomb and never hurts a single passenger. He receives his money and then disappears off the back of a plane never to be heard from again. It’s just unbelievable!

The skyjacking is just the beginning, as the line of suspects, and the evidence linking them to the crime, is beyond fascinating. But a lot of it is very circumstantial. There was never any hard evidence found that fully identified the culprit. This is where this series succeeds in selling, and elevating itself, by playing in the “what if” sandbox of hypotheses with all of the evidence to support why each expert believes they’ve uncovered the truth behind the legend. The investigation itself is the holy grail of cold cases and living through each theory gives you a sense of involvement.

One aspect of the series I was unprepared for was the acapella soundtrack which is such a joyful accompaniment. It adds a level of light-hearted playfulness that manages to draw you in further to join in the fun of the mystery.

DB Cooper Where Are You?! is a somewhat wholesome docuseries that invites you to get lost in the unsolvable legend of a man who hijacked a plane for ransom and was never caught. It’s a bloody entertaining delight that is less about the ending and more to do with enjoying the thrill of the chase with endless possibilities.