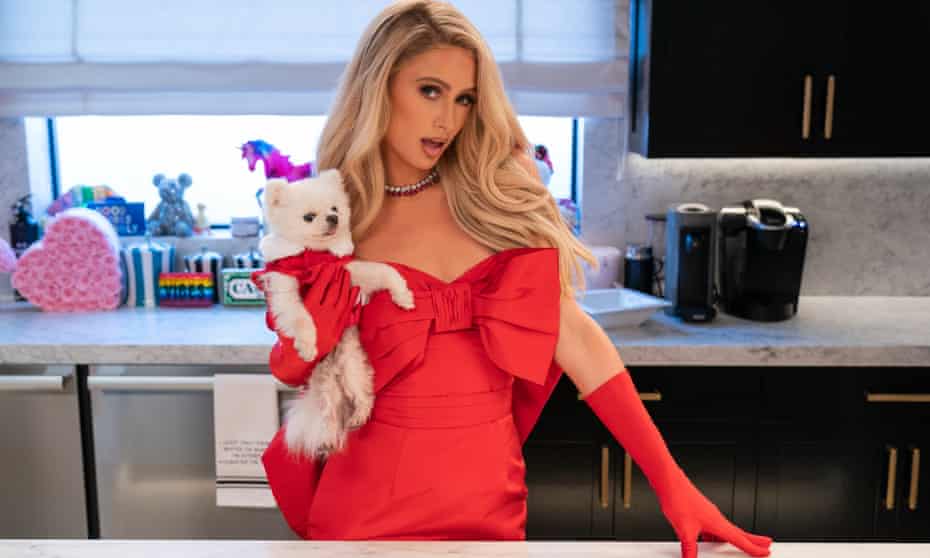 I like to think that the first “real” episode of Cooking With Paris premiered on YouTube in January 2020, seven months before the heiress and influencer dropped her intimate documentary The Real Story of Paris Hilton on the platform.

In that video, Hilton teaches viewers how to make her lasagna, a hearty dish packed with layers of ground beef and ricotta separated by the thinnest Barilla sheets. Wearing simple denim jeans and a black sweater embroidered with a glitter cloud and rainbow, Hilton moves through the massive kitchen with surprising ease. She cracks jokes, fumbles with various utensils and, in a voice devoid of its usual high pitch, talks about cooking with her mother as a child. She also shares her unique culinary tips and tricks. Hilton was no chef, but the video was good, honest and kind of refreshing; it got 5.1 million views.

I suspect its popularity led to the vexing and cringey disaster that is the most recent iteration of Cooking With Paris, now on Netflix. Lacking the understated charm and authenticity of the Paris viewers came to know through her documentary, the reality star featured here also fails to live up to the campiness that made some of her earlier ventures, like The Simple Life, guilty pleasures for some people. The show feels awkward, stagnant — like a teen who’s outgrown their childish antics but cannot quite bring themselves to embrace the inevitability of adulthood. Its forced frivolity backfires, and instead of fun, the enterprise is inescapably melancholic. Perhaps we just know too much about the real Hilton — replete with contradictions — to keep buying the act.

The opening seconds of the first episode hold promise. Paris, wearing an outlandish pink gown and matching bedazzled pink mask, stands in the cereal aisle of a grocery store, looking seriously at a box of Lucky Charms. Pop music plays in the background and a golden light showers her frame.

Suddenly, the camera pulls back to reveal the entire set-up: A camera crew surrounds Hilton and a mic hovers above her perfectly coiffed blonde hair. Hilton, as we know, is nothing if not manufactured, and to acknowledge that in the early moments sets the series up to be smarter than it ends up being.

Hilton parades through the store, mispronouncing words like “brioche” (a tendency that becomes particularly embarrassing and offensive in the second episode, “Taco Night with Saweetie,” when she refuses to learn the pronunciations for cotija cheese or tomatillo) and asking an employee what chives look like and what she should do with them. I found it hard to even smile at that contrived interaction, which felt more illogical than anything.

But I remained hopeful because I didn’t think Cooking With Paris was just about the meals. Its main attraction is its glamorous star and her guests, like Kim Kardashian West, Saweetie and Demi Lovato, who join Hilton in her massive, enviable kitchen to “assist” her in preparing some outrageous dishes. I expected it to feel like Made from Scratch, a series from Fuse, in which celebrities cook a childhood dish while sharing personal anecdotes. Maybe Hilton would whip up some interesting plates, perhaps they would have a story and the guests would divulge revealing details about their lives or provide moments of reflection. It wasn’t any of that.

Each episode of Cooking With Paris has a theme, and the first one is breakfast with Hilton’s former assistant and close friend Kardashian West. On the menu, inspired by the Lucky Charms marshmallows, are Frosted Flakes French toast and a turkey bacon frittata. As Hilton recites the agenda via voiceover, clips of a bowl of marshmallows sitting on a fuchsia pink blanket and Hilton’s recipe book — its cover featuring a diamond border and glitter stickers — play in quick succession. “Kim and I have elevated everything from velour tracksuits to selfies,” Hilton says cheekily as a photo of Kardashian West and her four children flashes on the screen followed by one of the duo in matching sweatsuits. “We’re about to do the same for breakfast.”

They do not end up accomplishing that mission. If anything, the episode reinforces how insufferable some celebrities can be and how overdone the series’ style and aesthetic are. Hilton pretends not to know her way around the kitchen (she asks what tongs are), an act that contradicts the narrative she presented in that first YouTube video of her cooking. Kardashian West seems to be herself, which requires no further explanation. The pair cobble together their meal and almost burn down the kitchen in the process.

While there is a sense of camaraderie between the two — they are old friends, after all — it’s not compelling enough to watch for 25 minutes. Maybe the producers know that, and that’s why the episodes rely so heavily on gimmicks: upbeat jazz tempos punctuating the conversations, one too many cuts to Hilton’s fuchsia pink table where she opens the recipe book, whisks eggs and caresses a Frosted-Flake-covered piece of toast, etc.

Cooking With Paris could have succeeded as a show in which meals are the conduit, not the product. Food is a tonic for relationships, facilitating gossip, confessions and generally good conversations. There are glimpses of that in some of the five episodes I watched. (There are six episodes in the first season, each running about 30 minutes long.) With Kardashian West, Hilton talks about wanting to have a child and revisits memories of the duo’s biggest party days. In the fourth episode, “Italian Night with Demi Lovato,” Hilton tells the pop star, who uses they/them pronouns, that they inspired her “to want to be vulnerable and be truthful.” That opens a conversation about the pressures of growing up in the limelight and the expectations to be perfect.

Maybe it’s that Lovato and Hilton’s relationship seems genuine, or that their energies match, but that episode, in which they try to prepare pink ravioli, feels the most worthwhile. I wish I could say the same about the rest of the series.