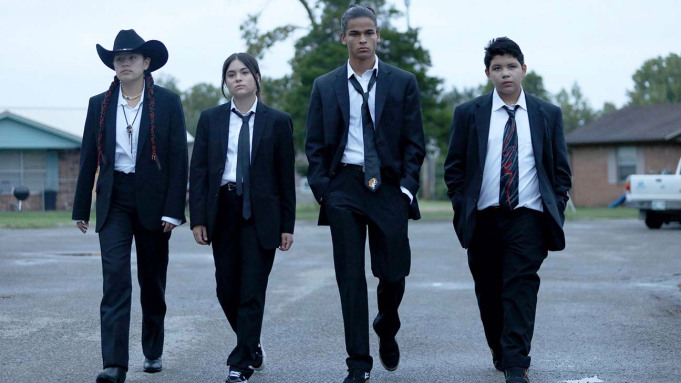 Perhaps no representational moment is more important than when underserved voices no longer face the burden of speaking for an entire culture, but can simply embody one specific experience and do it with authenticity.

Like Peacock’s Rutherford Falls before it, FX on Hulu’s new half-hour Reservation Dogs is a triumph of Indigenous representation on both sides of the camera. But whereas Rutherford Falls used star and co-creator Ed Helms as a way to draw in a mainstream audience and set itself the task of correcting eons of stereotypes, Reservation Dogs lacks big names or star power and seems to simply occupy its corner of the world with completely lived-in charm. And guess what? The best part is that Rutherford Falls and Reservation Dogs don’t need to be pitted against each other. Heck, Rutherford Falls breakout Jana Schmieding even guest stars in an early Reservation Dogs episode. You can and even should watch both, because they’re really good and because encouraging Hollywood to eventually make a third Native American-centric comedy really isn’t too much to ask.

Reservation Dogs isn’t, of course, entirely without big names. Jojo Rabbit Oscar winner Taika Waititi co-created the series with Sterlin Harjo and they co-wrote the pilot, with Harjo directing that first episode and writing three of four episodes sent to critics. Many viewers will recognize Fargo favorite Zahn McClarnon and Dead Man anchor Gary Farmer, two of the industry’s more prolific Native stars, in key supporting roles. But what really stands out in Reservation Dogs is a location you’ve never seen before on TV and an astonishing cast of young newcomers — much credit to casting director Angelique Midthunder — without a weak link among them.

Set and filmed in rural Oklahoma, Reservation Dogs is, at its ample heart, a rough-and-tumble coming-of-age story about a young gang of rebellious teenagers on a minor crime spree across tribal land. They’re heisting copper, filching deliveries of weed edibles and, in the opening scene, stealing a snack delivery truck, all to the chagrin of conspiracy-loving tribal cop Big (McClarnon).

The self-appointed leader of the gang is Bear (D’Pharaoh Woon-A-Tai), generally good-hearted but inept in a fight. Basically letting Bear pretend to be in charge is Elora Danan (Devery Jacobs), collecting their proceeds in hopes of an eventual move to California. Rounding out the quartet are ultra-resourceful Willie Jack (Paulina Alexis) and sweet and impressionable Cheese (Lane Factor). Collectively, they’re mourning the recent loss of their friend Daniel, whose death expedited their desire to leave Oklahoma behind. Adding complication, but only a little, is the arrival of a new clique of juvenile hoodlums, dubbed the Indian Mafia.

The Indian Mafia represents a threat — they’re prone to rolling up for a paintball drive-by or even jumping people in alleyways — but not an urgent threat. The tone of Reservation Dogs is such that our heroes are accustomed to a certain level of adversity; even if the Indian Mafia instigates most of of the episodic plotlines, which include a trip to the local health clinic  — Bear is a regular visitor — and a mission to get Elora Danan’s uncle-cousin (Farmer) to teach them how to fight, you’re never supposed to feel the stakes are too high.

The adventures are much more shaggy-dog than that, taking the characters around town, from abandoned warehouses to grocery-store catfish eateries, and bringing them into contact with a community featuring the amiable meth-head running the salvage yard (Kirk Fox’s Kenny Boy), neighborhood gossips/rappers Mose and Mekko (Lil Mike and Funnybone), the town’s jack-of-all-trades doctor (Bobby Lee) and more. Doing her best to maintain order, while also holding down a job and trying to find Bear a more successful father figure than his absent dad, Native rapper Punkin Lusty (Sten Joddi), is Bear’s mother Rita (Sarah Podemski).

For now, Bear’s major source of masculine guidance is the mystical warrior (Dallas Goldtooth) who appears in visions every time Bear gets knocked out, offering meaningless advice. This is one of several points at which Harjo and the writers wink at tropes about Indigenous tradition and superstition, but the humor is grounded. Jokes about shapeshifters exist amid realities tied to Native health care, depression rates and addiction. The slang and language and cultural touchstones are as specific and real as the lived-in, indie-film aesthetic, while at the same time there’s room for a barrage of demographic-spanning references ranging from Willow — everybody has opinions on Elora Danan’s name — to Platoon to Godzilla to, as the title implies, Reservoir Dogs. You’ll see similarities to many teen shows — Netflix’s On My Block is the comparison I made most frequently — in a series whose tone and point-of-reference are entirely its own.

None of this would work without the ensemble, recruited from Canada and the United States and proving, just as Rutherford Falls did, that there’s an Indigenous acting pool that TV and movies have been ignoring for far too long. Woon-A-Tai, admirably comfortable being silly, and Jacobs, tough and soulful, look like stars; they’re just stars who would never get opportunities like this without a creator like Harjo forcing the issue. Alexis has a distinctive comic delivery all her own, as do Lil Mike and Funnybone, who steal every scene they’re in. With Podemski and McClarnon leading the way, the veteran side of the cast is packed with familiar and unfamiliar faces all reveling in being part of a world so removed from noxious Native cliches.

Though I guess viewers are supposed to invest in the conflict between our heroes and the Indian Mafia — or perhaps the dream move to California — Reservation Dogs hasn’t tightened its storytelling enough for that to be the case for me. And maybe it never will. Atlanta, another convenient and very complimentary comparison, only sometimes feels like a show in which “tightness” is an attribute. In any case, there are more than enough pleasures to be found in this easygoing, but quietly revolutionary, Southwestern snapshot.