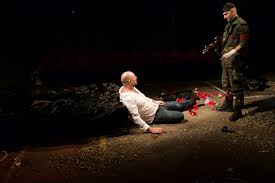 Norwegian cinema has been able to make itself stand out from among the industry in the region. More than any other Scandinavian industry, the Norwegians are willing to take the stories they tell way beyond the confines of a standard drama affair. From films like Ragnarök, The Wave, and of course, the great Troll Hunter, their industry has shown to be willing to take genre filmmaking and give it the effort and the resources necessary to make great films.

Many other European film industries, like the ones from Germany, France, and even Italy, have been trapped inside the confines of their own legacy. Countries that once were known for the refined and elegant take on filmmaking. Those legacies are long gone. Of course, the countries are still fine examples of what healthy local film industries look like, but they have not been able to look past the themes and the styles that defined their legacies from long ago. Norway, on the other hand, is just beginning its road to glory.

Blasted is a Norwegian film directed by Martin Sofiedal and stars Axel Boyum, Fredrik Skogsrud, Ingrid Bolso Bersal, Andre Sorum, Mathias Luppichini, and Eirik Hallert. The film tells the story of Sebastian, a young executive at an investment firm that is soon to be married and is trying to get a promotion at his job. Sebastian is driven by stress, and so her fiancée invites his old childhood friend to his bachelor party. The two friends will rekindle their friendship as they battle against an incoming alien invasion.

Blasted is genre filmmaking at its best. Yes, the movie cannot compare its production values to the biggest Hollywood films, but what lacks in resources it compensates for by having a ton of heart and just the fact that it is plain old fun. The film doesn’t take itself seriously enough so that we can do it as well. Because of it, everything that happens in the film feels in line with what a movie of this caliber would do, so even the biggest shortcomings can be excused.

The film uses a mixture of comedy with heartfelt storytelling to put the characters into situations where they reveal themselves. Doing this subverts expectations at every moment as well. And even when the movie clearly sets the path of a couple of characters into a defined path, it manages to take them in another more interesting direction that goes against what is often done in this type of movie. Especially the type of movies coming lately to Netflix.

The film definitely has that World’s End kind of vibe, as its premise and the way the film is executed, remind you of the work of Edgar Wright or Joe Wright. The movie is snappy and fast. Director Martin Sofiedal never stays too much in one place, and he always keeps things on a roll. Is the movie visually striking? Not really, all the shots and the camerawork are pretty standard fare. The look of the movie is very TV-like at some points, but it all works in favor of that B-movie adventure feel the movie is going for.

The actors are all doing great work. The characters are defined very early on, and they don’t really derail from their archetypes. So, yeah, you will not see any characters you haven’t seen before. Sebastian, for example, is going through the path of the uptight character rediscovering who really is and who to enjoy life much more. It makes you wonder how he got a girlfriend in the first place, when he is actually so uptight and unfun at the beginning of the movie. But those are the things that let you know what this movie is.

The visual effects are quite solid, but there is nothing here that will make you go wow! Maybe, the last sequence of the film stands out just for the fact that you don’t really expect this type of quality VFX coming from a movie with a clear low budget to work with. However, this is clear proof that there are relatively no excuses for when a movie’s VFX is doggy, especially the ones displayed in big blockbusters. If Blasted can deliver then there are a lot of movies out there that can also do it.

If there is something that really hurts the movie on a primordial level is the fact that the movie is quite predictable with its plot. You know exactly what is going to happen from the moment the film makes its premise clear enough. This lack of surprises in the plot makes the movie feel on autopilot. The film does great and unexpected work with its characters, but sadly the story revelations feel like an afterthought, and that last scene, the one that closes the movie, is very, very weak.

Blasted is a fun adventure that reveals the meaning of being truthful with yourself and also being able to be real with the people that love you. The film cannot reach its full potential because it doesn’t really have the resources to do it, and there is one character that truly feels more like an add-on than an actual part of the story. Nevertheless, Blasted is quite fun, and it will make for a fun watch whenever you decide to watch it.