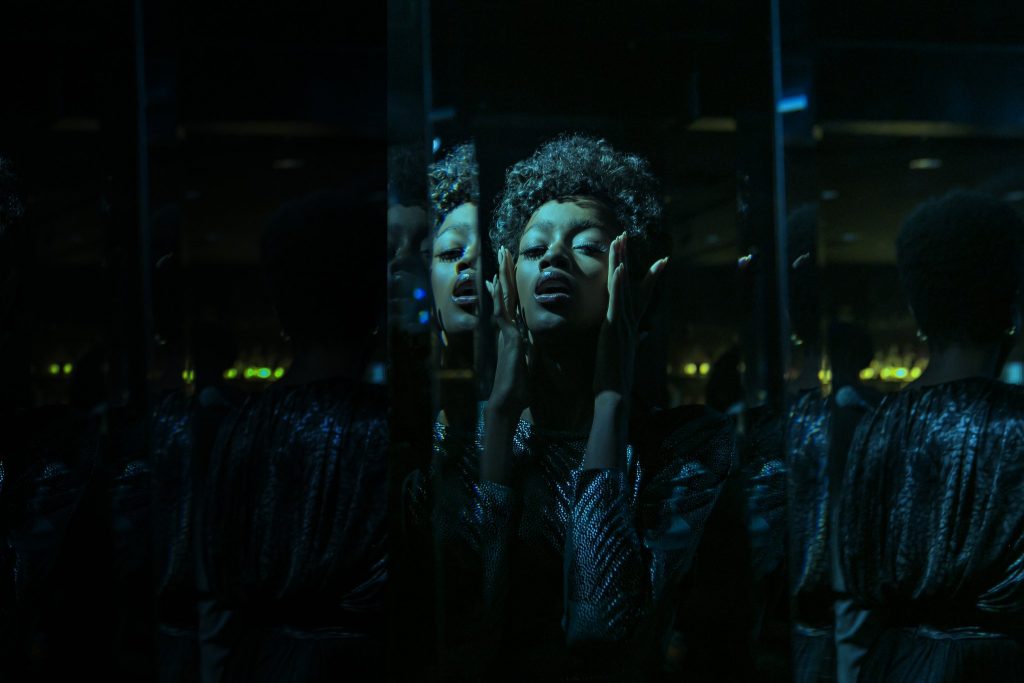 The fantasy, power, and impact of the music industry has been well-documented in motion pictures. This very minute, audiences can go to a theater and learn all about the highs and lows of musical icon Elvis Presley. It’s difficult to craft something original from a world littered with as many success stories as horror stories, many of them already told (and told again) on screens both big and small.

And it’s even more difficult to do that when your main character — presented as a generational talent deserving of her own cinematic event — never actually sings a song. Such is the case with screenwriter Lena Waithe’s new Netflix musical drama “Beauty.” Though heavily inspired by the life of Whitney Houston, enough that it may well qualify as something of an unauthorized biopic of the massive musical star, “Beauty” fails to hit the right notes, leaving too much unspoken and (quite literally) unsung.

Starting in the late-’70s, Beauty (Gracie Marie Bradley) follows a young would-be star with a powerful voice, one so powerful that her own mother (Niecy Nash) is threatened by it and her father (Giancarlo Esposito) is desperate to exploit it. The only one who seems to have Beauty’s best interests at heart is Jasmine (Aleyse Shannon), her best friend and (somewhat secret) romantic partner. But when Beauty is offered a recording contract, the pair’s relationship is threatened as the music world (and its many vultures) attempts to turn Beauty into something she’s not.

Much like Houston, Beauty is strongly torn between her love of gospel music and pop. The similarities don’t stop there: Beauty’s mother is a former singer, not unlike Houston’s own mother, Cissy, while Beauty’s relationship with Jasmine is akin to Houston’s alleged long-term relationship with Robin Crawford. Even Beauty’s seemingly charming record executive/overseer (deliciously played by Sharon Stone) feels like a freshened up take on Clive Davis, who discovered Houston. And that’s even saying anything about Beauty’s persistent male neighbor, who shows up dressed as if he was an extra on VH1’s New Edition TV movie.

If Waithe and director Andrew Dosunmu wanted to do a faux Houston biopic, that could have provided plenty of fertile ground. Instead, everything about “Beauty” is muted. Muted emotions, muted relationships, even muted dialogue. Worst yet: we never hear Beauty sing. Sure, we see her record her songs behind glass while others comment on how she possesses “the voice of angel.” She’s “iconic,” practically the second coming of Ella Fitzgerald, but you’d never know that, because we never hear Bradley (or a well-chosen voice double) herself. Dosunmu and Waithe seem more interested in how Beauty views herself through other singers — distancing the character from the audience as well as from Beauty herself — like Patti LaBelle, Donna Summer, and Judy Garland.

“Beauty” is at its strongest when it actually comments on the pernicious nature of the music industry and how it treated Black artists like Houston. We see Beauty switch between watching Donna Summer perform “I Feel Love” and a gospel performer, illustrating how the marketing, response, and power of music changes between the two genres. Once Beauty starts to grow in popularity, she’s forced to prep for interview questions while being reminded to speak in “proper English.” Her hair is changed because “little Black girls like long, flowing hair.” Though Beauty brings up obvious critiques, like that standards of beauty for Black women are often dictated by white people, or questioning she has to appeal to an urban audience and white teen girls first, considering that Houston’s trajectory is being so obviously telegraphed, the audience knows these answers don’t matter in the end.

Still, Gracie Marie Bradley is luminous in the title role. Cinematographer Benoit Delhomme’s camera revels in capturing the angles of Bradley’s face and the young actress shows the transformation from shy girl into confident pop star effortlessly. But the character is a complete cipher; described by others as being a fantasy for audiences, Beauty literally is just that. We know nothing about her outside of a) she’s a good singer, b) appears to enjoy it, and c) loves Jasmine.

But that’s all surface. There’s nothing deeper about Beauty, nothing about the person she wants to be or what she wants out of her career or how she feels about anything. She’s controlled by everyone around her, from her father, who pushes her to sign the contract, to the studio execs. Toward the end of the film, Beauty starts to push back slightly, but she just as easily seems to be falling in deeper. Too often characters look at her and make assumptions or the camera just stares at her, as if to wait for her to do something interesting. She’s like a character in a fairy tale (she is named Beauty, after all; her brothers are named Cain and Abel), a cautionary figure meant to show the audience…well, something about the industry, surely.

Nash is solid as Beauty’s mother, but she’s portrayed as nothing more than a Cassandra figure, giving her daughter choice bon mots like “I haven’t had the spotlight on my face, but I’ve seen people get burned by it.” It’s unclear why this woman would want her daughter to sing at all, considering how frequently she talks about the den of iniquity that she perceives the record industry to be. Too often Nash is there to remind audiences that mothers are apparently psychically bound to their children, but it seems like an excuse for still more narcissism from yet another undercooked character.

The only other character with substance in their performance is Aleyse Shannon as Jasmine. Jasmine and Beauty’s bond is meant to be the deepest relationship in the eponymous character’s life, and Shannon plays Jasmine as both a protective friend and lover who truly has Beauty’s best interest at heart. And yet the pair’s romantic side is oddly chaste, with Dosunmu content to simply focus on gentle forehead touching, and nothing else. It could be indicative of the time period in which the film is set, but even when the two women are alone, there’s little celebration of their relationship. That’s a shame, as Shannon and Bradley have exhibit chemistry.

“Beauty” could have something interesting to say about the cultural and aesthetic straitjacket Black female artists endured in the 1970s and 1980s, and whether that’s changed (or not) even today. But Dosunmu’s airless directing and Waithe’s thin script only amount to loud allegory that never goes anywhere and drowns out any compelling ideas that might be worth singing.