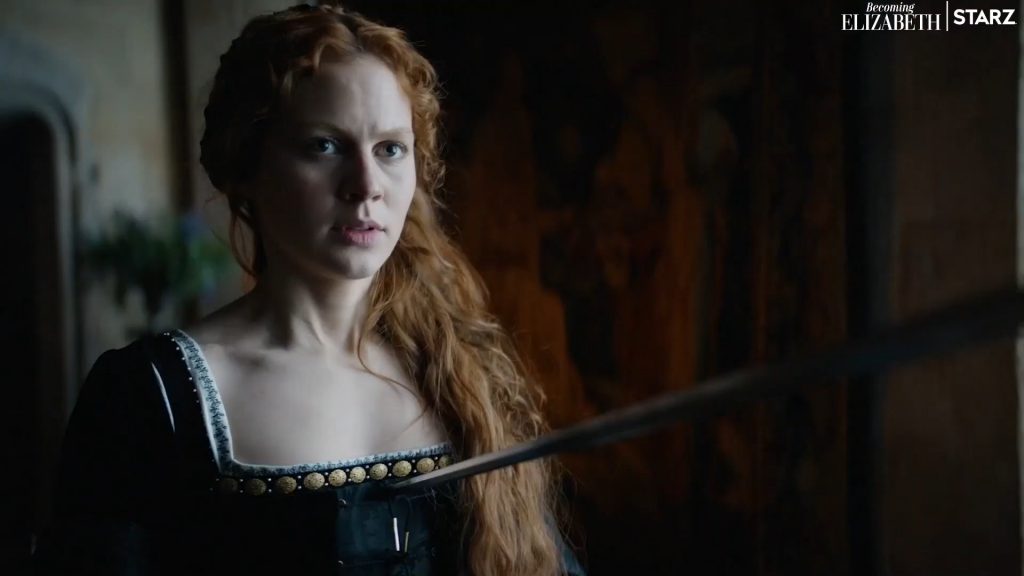 After the breakout hit of Showtime’s “The Tudors” in 2007 many period dramas tried to follow suit by dropping the bell sleeves and upping the sex and nudity. Sometimes, if a show really wanted to be daring, it would insert modern music or find some way to remind audiences, “These Tudos were just like you!”

Creator Anya Reiss’ “Becoming Elizabeth” attempts to do something different by trying its hardest to adhere to the history of the era. This isn’t to say viewers won’t see nudity or hear some electric guitar on the new Starz series, but for every moment like that there’s episodes devoted to characters discussing the distinction between Catholicism and Protestantism. Will this bore an audience used to “The Tudors” model of television? It’s certainly possible. But alongside some beautifully lyrical writing and a stellar cast the desire to tell Elizabeth’s story as clear as can be was a refreshing delight.

King Henry VIII has died leaving the kingdom of England to pass into the hands of his pre-teen son, Edward (Oliver Zetterstrom). As Edward learns how to rule a country he is torn by his older sister Mary’s (Romola Garai) desire to keep her Catholic faith. Trapped in the middle is the teenage Elizabeth (Alicia von Rittberg), sister to them both and, as history tells us, the future Queen of England.

There have been several stories about Queen Elizabeth I, including ones examining her adolescence, like PBS’ “The Virgin Queen” from 2005. This series is not trying to reinvent the wheel, but to tell Elizabeth’s story in a way that both plays with rumor and eschews many of them. Alicia von Rittberg’s performance is that of a young girl whose presumably bad reputation precedes her. Decried as the daughter of “the whore,” Anne Boleyn, the death of Henry VIII is a chance for Elizabeth to be embraced by the siblings that have long been at odds with her. The young princess is quickly drawn into the household of Henry’s final wife, survivor Catherine Parr (Jessica Raine), who despite being the closest thing to a mother Elizabeth has ever known still sees the girl as a way of furthering her ambition.

The scripts for the first four episodes made available to press are a fascinating exploration into the lives of its female characters. Raine’s Catherine Parr is sympathetic just for surviving Henry VIII’s brutal reign of terror when it came to his wives, and it’s a skill she hopes to cultivate in Elizabeth, even if it puts the pair at odds because Catherine hopes to find some way to rule through her new wards. Catherine’s wayward husband, Thomas Seymour (Tom Cullen), begins a flirtation with the teenage girl that causes Catherine to lash out at Elizabeth. At the same time, the script gives Raine a fantastic speech about reputation, and how while Elizabeth may not be the same as her mother, the men of this England automatically assume she is.

All the women in the series are simultaneously allies and in competition with each other. Catherine genuinely sees herself as the only mother Mary, Edward, and Elizabeth have ever known, but because of her position at court she still has to find a means of exploiting them to benefit her and keep herself financially secure. Same with Mary, who wants a relationship with her sister but understands that siblings, historically speaking, have too often stabbed each other in the back. Power plays at the periphery of every interaction between the Tudor siblings, dictating their moves as much as they’d like it not to.

The pilot episode establishes that these three children — though Mary was actually 31 when Henry VIII died — may finally be the siblings, and united front, that their parents denied them, but there are many cooks in the kitchen. When the series isn’t focused on Elizabeth it’s looking at the different pressures Edward and Mary are dealing with. While Elizabeth is wrestling with issues like a grown man being interested in her, the relationship between Mary and Edward involves the monastic issues that made the era so turbulent. It’s a testament to the writing, coupled with the performances of Garai and young Zetterstrom, that these moments are highly fascinating and watchable.

Garai’s Princess Mary is not only devout in her faith, but irritated by being denied the throne because she’s female. When Edward attempts to make a power move by telling her to convert, Garai perfectly captures the anguish of a woman who feels she’s set to be damned by denying her God. A moment where the court watches a pantomime of the Pope being urinated on cuts to Garai’s expressive face, trying to hide her torment at seeing her siblings laugh so uproariously. One of Mary’s allies is a Spaniard named Pedro (Ekow Quartey), which allows the series to actively engage with casting a Black man in a world that movies and TV have shown us was all-white. Mary is not thrown by Pedro being Black, though many other characters he encounters are, but more that he stands up to her. As she mentions, people are too often scared to disagree with a future monarch.

As far as the King is concerned, the series certainly doesn’t sell Edward’s story as a Richie Rich enjoying the spoils of his kingdom. The image of King Edward in paintings as a small boy wearing clothes that seem too big for him comes to life through Zetterstrom, who is the ultimate pawn in the game of monarchy. Catherine Parr and Thomas Seymour are determined to marry him off to the shy Jane Grey (perfectly played by Bella Ramsey), while Thomas’ brother wishes to keep the boy quiet and “learning” while the men in power make decisions around him.

Really, “Becoming Elizabeth” is the story of growing up in a monarchy of this era, where children are old enough to rule but never old enough to lead; where women are branded from birth and told to live up to their gender roles to keep their heads. The series isn’t content to be a saucy exploration of the Tudor era, but instead a searing examination of the politics of the time. Think of it like “Succession” with French hoods.