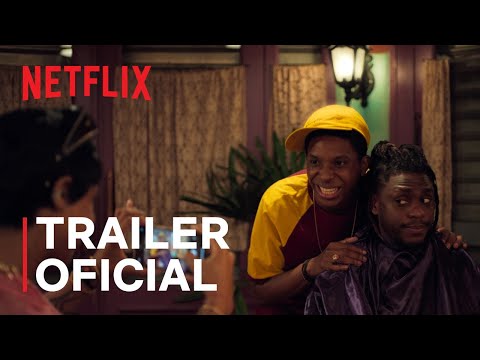 Richardsson (Lucas Koka Penteado) is on the screen and talking right at us like the fourth wall barely exists. He introduces us to life in the “outskirts” of Rio de Janeiro, where existence is “a never-ending hustle,” but “luck is on our side,” he insists. There’s joy in his voice, optimism in every word and step, movement and color edge-to-edge in every frame. At one point, Richardsson turns to the camera and says, “Really? You’re bleeping my swearing?” and after that, whoever is responsible for bleeping his swearing no longer bleeps his swearing.

Richardsson introduces us to a variety of neighborhood characters, all of them a little goofy and larger than life. His mother, Cristina (Solange Cuoto), owns a salon, Saigon. His beloved father (Serjao Loroza) has passed, and the reason there’s an actor’s name in parentheses is, he shows up as an advice-dispensing figment Richardsson spot-on identifies as a narrative device: “Isn’t that very cliche?” he quips. His schoolmate Raquel (Rebecca) gets a subtitle, “the love interest,” which collides headlong with the fact that she has a rapper boyfriend named Cheese Curd (Yuri Marcal). Richardsson’s sister Danielle (Jeniffer Dias) is a college student. And across the way is Greice Kelly (Juliana Alves), ID’ed by the subtitles as “the poor man’s Beyonce,” who owns a rival salon. Greice is getting all the business these days, as Saigon struggles. Even Richardsson’s grandmother goes to Greice to get her hair done. And the plot gets rolling as soon as the landlord drops by to remind Cristina that she owes three months’ back rent, and has 24 hours to pay up or get out.

It’s Richardsson’s last day of high school. He wants to work rejuvenating Saigon, but Cristina doesn’t see a future in that, and wants him to go to college. She reminds him that his father quit his stable government job to invest in the salon, and a heart attack killed him. She sends him on two errands: fetch some curling serum for the one client she has today, and visit the local fortune teller for advice. So off he goes on a comic ramble, ending up with a chicken under his arm and no curling serum – and running into a variety of nutty folks, all of whom have terrible hair and desperately need cuts. Richardsson obliges, spectacularly so. He’s got talent. Style. Ambition. All the stuff Saigon might need, you might be thinking. Hmm. Maybe you can see where this is going.

The conflicts in A Cut Above are sometimes so trifling, they straight-up evaporate – into a fine, refreshing mist. And it feels nice, this delightfully angst-free dalliance of a cartoon of a comedy about working-class people living vividly in color. Sometimes, an unapologetically silly movie in which it takes one day to solve all kinds of sitcommed problems and ends with everybody loving everybody else at a big street party is a perfect escapist antidote to the daily weltschmerz of 21st-century existence. It’s just a snowcone on a hot day, and doesn’t pretend to be anything else.

Granted, any cynics in the audience will be pushed toward the wrong side of the movie’s endearing/annoying divide. Director Rodrigo Franca pushes the boundaries of puerility with an onslaught of cornball visual flourishes ranging from floating hashtags to ridiculous wigs, and a variety of punch-up sound effects that include car horns, synth strikes and that record-scratch fzwoooop that typically denotes comic desperation. You also might feel frustration with the fatigued plot, where Cristina stubbornly adheres to her own vision for Richardsson’s future without seeing what’s right in front of her, obvious as the sun in the sky in her eye.

But the way Franca moves the camera, the way the costume and wardrobe people went wild, the way A Cut Above is relentless with exuberance and positive energy – it paints in big, crazy rainbows. This unrepentantly upbeat story about people who are proud of their culture and community might drive you nuts at the same time it wins you over.