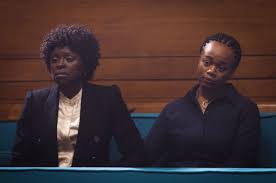 Another Sunday evening, another courtroom drama in which the audience gets to be the jury. Hot on the heels of Showtrial is You Don’t Know Me (BBC One), based on the 2017 novel by the barrister Imran Mahmood. Here, a young man, Hero, is in the dock, accused of murder. Much circumstantial evidence suggests he is guilty of the crime, and the prosecution seems to have an easy case, summarised neatly in an efficient, damning closing statement. The victim’s blood is on Hero’s fingernails, the murder weapon was in his house, his car was seen in the area right before the shooting. Case closed.

Except that this is a four-parter, so, of course, it’s not closed yet. Instead of hearing a barrister deliver the closing statement for the defence, we learn that Hero has sacked his barrister, so that he can represent himself and tell his own story to the jury. He is as convinced as we are that he’s going down for the crime, so he might as well go for one last roll of the dice.

“The truth is that I’m innocent. I am. I did not kill that boy. I didn’t,” he says, before explaining, at length, why it was not him that did it.

Hero works at a fancy car dealership in London before being accused of murder, and is a decent, law-abiding son and big brother. He is on trial for shooting and killing Jamil, a local drug dealer with whom he had publicly argued, though their relationship slowly reveals itself to be more ambivalent. Jamil had been “chatting shit about my girl”, he tells the jury, adding that his girl, Kyra, will be the key to everything.

And so we go back in time to follow his love story with Kyra from inception to messy end, in great detail, beginning with their bus-based courtship and blueberry muffins. If this story is meant to be what the jury is hearing, then they learn that Kyra really loves reading.

Aside from an impressive home library, Kyra is a mystery, a blank page. When she suddenly disappears from his life, Hero attempts to report that she’s missing, realising then that he doesn’t know a thing about her, even though they are living together: not where she went to school, not her parents’ first names, nor even why a strange man had appeared at their door and she had lied about not knowing him. A trip to Camden reveals some uncomfortable details about her life, which results in a classic TV rage montage, with smashed pictures, furious jogging and a stress-induced vomiting fit.

The performances flesh out the bare bones of the drama, and give it some much-needed intrigue. Samuel Adewunmi has hopped over to the BBC from his stint in ITV’s Angela Black, and here he cooks up a convincing mix of righteousness and flaws. Bukky Bakray, such a standout in last year’s film Rocks, is his sister, Bless, and Sophie Wilde is the ethereal Kyra.

After 45 minutes, the drama finally starts to develop a sense of urgency, as Hero tells the jury that he’s done some bad things. “You’re going to hear a lot about them by the time we’re through,” he says, which does not strike me as a great defence strategy, nor does it explain why we’ve spent the bulk of the episode learning that Hero’s mum really liked his girlfriend. But it does, finally, get the drama going.

It takes a long time to get there, and if it is the audience’s job to be the 13th member of the jury, I wonder if it will seem too much like hard work. As in the book, Hero’s lengthy statement forms the narrative, via voiceover, which makes it feel a little like an audiobook, with added moving pictures.

That’s not really what television is, and in this first episode, You Don’t Know Me doesn’t quite bridge the gap between the stylistic devices that work in a novel and what feels authentic on screen. But it does lay a trail of promise as it starts to wake up. Now that we’ve got the niceties out of the way, Hero can begin to unpick the case against him. Hopefully the members of the jury, including those at home, will have the patience to see it through.