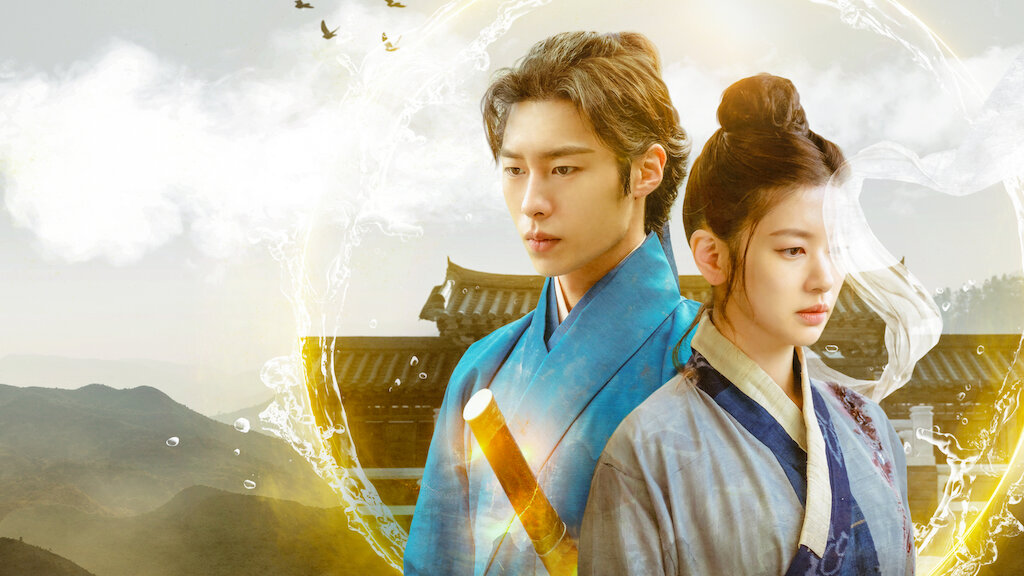 We begin 20 years ago with a crowd of people weeping over the dead body of Do-hwa, which allows for the capture of her child. When taken, we see the father block the gate of energy belonging to Jang Uk, and the mage disregard his son. Then, we cut back to the present, where the young master again compliments the eyes of Naksu, who has the soul-shifting mark within them. “I am planning to save you,” he says as Seo Yul advances, hoping to kill the assassin.

However, Naksu is swiftly saved by Jang Uk, who tries to explain the entire situation while his friends confront him. What proceeds is a scene of strange justifications, apologies and faux revelations, anchored by the longing gaze of the assassin towards her old acquaintance, Seo Yul. Suddenly though, the group are told that the body of the original Naksu is now missing, triggering a response from Jang Uk, which tells the woman masquerading as Mu-deok that he is well aware of his identity. So, she admits she wishes to kill him through an internal thought.

While this is going on, Park Jin notifies his followers that the body thieves have broken the barrier of Songrim, meaning that there is a spy among them and that they will have to ask the Jin family for assistance. Meanwhile, Jang Uk is quizzed once more as his friends conduct a mini-investigation of their own. Here, we find out that most souls are shifted to people of a similar identity, as the powerless master continues to tease his associate, and the two others are summoned away from the secret room.

Shockingly, when alone with Jang Uk, Naksu happily admits that she is the shadow assassin everyone else is pursuing. But her boss is not startled, as he wants the person who should be a foe to become his master and break the spell that has prevented him from learning anything. Elsewhere, Park Jin informs his assistant that there is a soul shifter in Songrim.

When we return to Jang Uk, he is putting forward his offer to Naksu. If she would help him break the blocked gate of energy and allow him to master spells, he will protect her. The assassin isn’t interested, though, citing his stubbornness as the reason why. Yet Jang Uk has a trick up his sleeve, shutting the door to the secret room so that nobody can leave without his help. What ensues is a strange game of survival, but one that allows the pairing to leave unscathed, ready to collect Naksu’s sword so she can begin her plan.

Unfortunately, such a scheme cannot be executed, as a mage arrives to tell the duo that they must gather at the training centre at the request of Park Jin. The leader wants everyone in the same place so he can eliminate the soul shifter, helped by a woman who brings with her an heirloom that can spot the antagonist. With that in mind, nobody is allowed to leave the room thanks to the threat that any attempts to do so will result in death, and the process of discovery begins. It works, too, though not quite as expected, as another soul shifter who lingered in Songrim ends up attacked by the supernatural dog. Subsequently, a fight begins, one only quelled by the intervention of the skilled swordsman Seo Yul.

After the four seasons of Daeho have an awkward gathering together, Jang Uk excuses himself to look for Naksu, who herself is wandering around to find the dead body belonging to the soul shifter. That is until he prevents her from exiting, exposing her plans, as well as the lack of options available to the assassin who is still being hunted by the ghost. Fortunately, Jang Uk is on hand to be the saviour again, with the young master breaking the heirloom to destroy the supernatural being before it can devour Naksu.

Though caught over his bad deed, Jang Uk seems to evade harsher punishment than exile to Gisan. That is until he tries to blame his lack of teachings for the act, something which leads to him being banned from moving or talking. Meanwhile, Dang-gu explains the context of the broken-off engagements with the Jin family to the person he believes is Mu-deok.

While being punished, Naksu says that she will be leaving first, along with the spirit plaque, but that she will spare the man who attempted to save her should they ever meet again. Unable to do anything, Jang Uk just sighs.

Next, the maid of Jang Uk escorts him home, quizzing him along the way about his reckless behaviour the night before. Concurrently, Naksu buys firecrackers under the guise of them being for a plan hatched by her former boss, while she also sets the wheels in motion for the spirit plaque to be sold on the black market. In the background, a woman lingers smilingly, potentially ready to use what she has heard.

Following that, the leader of the group of assassins informs his men that they should be able to sacrifice themselves for him, as if they die, they will get new bodies under the alchemy of souls. So they fire at presumably innocent lives as the grey-haired assailant watches on. Elsewhere, Jang Uk discovers that Naksu’s men have been discovered, but it appears to be a ruse when Park Jin is summoned to the palace, as the villainous Jin Mu is there to attempt to use his fake capturing to leverage himself for a promotion, which ends up becoming a burning of Naksu’s body, yet retention of her sword.

As Jang Uk finds himself with the situation explained to him, Naksu is confused by the acts of the assassins, believing that they may think that she failed in her mission to claim a new body. Then, the young master goes in search of the sword, only for Jin Mu to attempt to take him in as his own. As such, a back and forth begins, something ominously punctuated by Jang Uk’s claim that he is only unable to unsheathe the sword “for now.”

When it is revealed that the spirit plaque has been stolen by Ae-hyang, one of Jin Mu’s men attempts to purchase the item and kill the current owner, believing that she is no longer useful. That’s because they think that, presumably, the woman is Naksu, allowing the woman who assumes the identity of Mu-deok to understand that the Danju has cut her off from their plans.

Next, Seo Yul ponders whether Naksu really was the woman who he had a connection with as her body burns, with the new owner of the soul also watching on as her dead flesh ignites. There, she realises the true identity of Jin Mu, the man who took her in on the day her parents burnt to a tragic death. However, she is granted a way out from her lessening role in life by Jang Uk, who arrives on the scene with her sword, ready for her to unsheathe it.

Naturally, the assassin is able to receive the energy of her weapon, or so it seems at first, as when she reaches to touch the item, it fends her away. Naksu is now weak, unable to handle the sword that once killed many people. “We are useless,” Jang Uk states, banishing his temporary maid with the knowledge that she is unlikely to be a threat anymore. “I would rather die than live like this” is the response, one delivered with a deflated face and worn-out demeanour.

Leaving to head to the grave of the soul shifters, Naksu stares onwards at what she says will be her resting place before diving into the water in a bid to drown to her death. Concurrently, Jang Uk is informed of his former ally’s location, but what he doesn’t realise is that what is happening is an unsheathing of the weapon the assassin was previously unable to retrieve the energy. Naksu has returned as her full self, ready to greet the man who saved her. Yet when she points the weapon at him, she collapses in a heap before waking up back in an infirmary in Songrim.

Here, it’s revealed that the energy is currently only accessible in the lake, which makes Naksu consider possible ways to re-obtain her former powers. As this all occurs, Park Jin discusses the arrival of the maid at the infirmary, while Jang Uk is told to risk his life for the sake of the shadow assassin. He doesn’t have a choice anyway, as he’s been unknowingly poisoned, told as he’s collapsing that if he survives the current situation, she will be his master. Then, when Park Jin and co. arrive at the scene, they’re told the blunt facts. If Jang Uk’s gate of energy is not opened, he will simply die.

But instead of this, Park Jin favours capturing Naksu. Though, Heo Yeom wishes to open the gate of energy and does so independently so that Jang is freed from all ailments. When the young master arises, he finds out what’s happened, so goes in search of his prospective master to rescue her. And when he does so, the new relationship between the two is confirmed, though the episode finishes with Naksu collapsing into her pupil’s embracing arms.