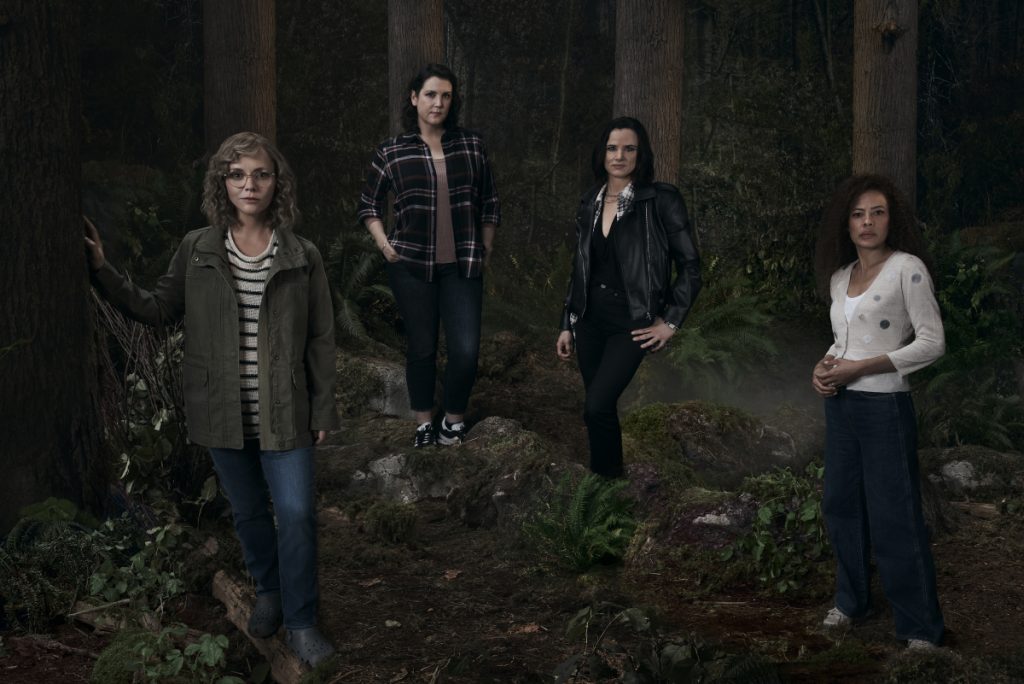 A reporter named Jessica Roberts (Rekha Sharma) asks various people about the group of girls who survived a plane crash in 1996. We then flash back to that time, in a random small town in New Jersey, seeing the Yellowjackets girls’ soccer team on the field.

In the bedroom of team captain Jackie (Ella Purnell), she and her boyfriend Jeff Sadecki (Jack Depew) are having some sneaky morning sexy times, because as Jackie tells her best bud Shauna Sheridan (Sophie Nélisse) when she picks her up for school, that “I don’t want to enter college as a virgin.”

Back in 2021, a grown-up Shauna (Melanie Lynskey), leading a bit of a depressing life as a stay-at-home-mom, is approached by Roberts, who thinks that if she tells her story, she’d be able to cash in on a 7-figure book contract. After all, the survivors of the plane crash her team was on managed to live in the woods for 19 long months before being rescued. Shauna, who claims she hasn’t heard from the others in years, tells Roberts to fuck right off, mainly due to the fact that she and the others have vowed never to talk about what went down.

We see flashes of two other team members, both in the past and present. Natalie (Juliette Lewis) is dealing with her anger issues in rehab yet again, and the teenage version of her (Sophie Thatcher) is a good player who likes to get drunk with her nerd friends in an alley and basically is an anti-jock jock. Taissa Turner (Tawny Cypress) is running for state senator; a photographer at a magazine shoot calls her the “gay Kamala”.

The teenage Taissa (Jasmin Savoy Brown) is more concerned with freezing out a freshman varsity player at the national tournament they’re about to play, because she thinks the frosh is costing the team. Team manager Misty Quigley (Sammi Hanratty) is a giddy teen groupie, almost in love with everyone. As an adult (Christina Ricci), she’s a bitter and vindictive senior care nurse.

Adult Shauna meets with Taissa to let them know about this reporter — who doesn’t have any bylines — is poking around. Taissa also tells her about Natalie, whom we see is back in New Jersey, taking a rifle out of the front trunk of the Porsche she has in storage.

Interspersed with the teenage drama and the adult angst, we see scenes of the crash survivors, clad in fur pelts, doing things like draining the blood from the girl they trapped, then cooking and consuming her, all in a ritualistic manner.

It takes a lot to juggle what is essentially three timelines, but that’s what Yellowjackets showrunners Ashley Lyle and Bart Nickerson have tasked their writers to do. For the most part, it’s done effectively, drawing some pretty clear lines between the soccer team members’ characters pre-crash, post-crash and a quarter century later.

The non-linear storytelling method, which tends to keep details hidden longer than a linear method might, usually annoys us, but here it’s used effectively. The big advantage is that, in the pre-crash timeline, the writers are trying to establish how the major players on the team liked and/or hated each other. It feels like the usual coming-of-age stuff, but with actors like Purnell and Nélisse in the 1996 timeline, the pre-crash timeline feels like it’s going to be a bit meatier than just the usual teen angst stories.

For one, the town they live in has a definite have/have nots gap, both of which are represented on the team. Jackie lives in a huge house with seemingly little supervision; another teammate’s dad pays for a charter to nationals, and the girl quips that it’s “his idea of parenting.” Meanwhile, Natalie lives in a trailer, and another team member has to slap her passed-out mother to wake her up.

We also see other issues that will potentially pop up between team members, like Shauna’s secret dalliances with Jeff, which we see in the present turned out to be a long-term thing once Shauna was rescued. Taissa engineers a situation during practice where the freshman girl whom she wanted to freeze out breaks her leg so bad it sticks out of her skin. And they all seem to hate the one girl on the team who prays about everything.

The least defined storyline is the post-crash story, which makes sense. Most of the mysteries of the show take place in that storyline. How did they form this society in order to survive? Who took leadership and why? And how did it get to the point where they trapped poor Jackie and ate her?

Actually, we have no idea if that really is Jackie; she’s wearing Jackie’s heart pendant, but Jackie also gave that pendant to Shauna on the plane right before it crashed. So seeing those mysteries play out should be interesting.

The least interesting storyline is probably the present one, despite the presence of fine actors like Lynskey, Ricci and Lewis. That’s the storyline where all of the now-middle-aged women are not only still dealing with the PTSD from their time in the woods, but trying their mightiest to keep what happened there quiet.

Yes, there’s potential for things to happen in that timeline, as we see Natalie stalking Misty outside of Misty’s workplace. We know that Misty ended up being the ringleader of the gang in the woods somehow, and it seems that at least Natalie wants to seek her revenge. But what will be more intriguing to watch, seeing all of these broken women try to come to grips with what happened all those years ago, or actually seeing what happened back then? We’re thinking it’s going to be the latter, though the performances of the trio we mentioned, along with Cypress, might help us change our minds.