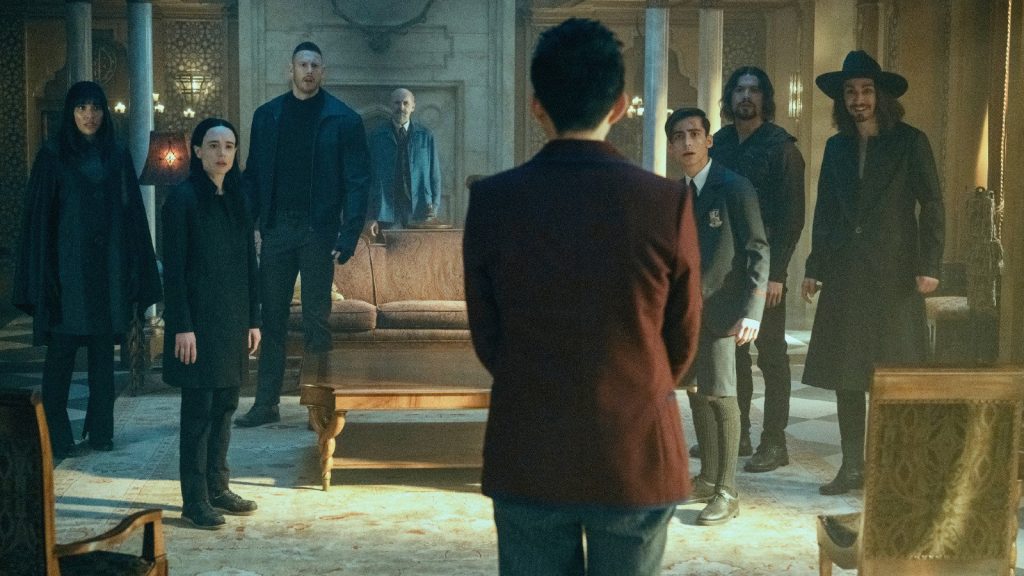 “The Umbrella Academy” is a show about offbeat superheroes in a strange, unique world. It’s a show, on paper, at least (literally, because it’s based on some of the most unique comics of the last 20 years), that has the potential to go places that no superhero series has ever gone before. And yet, each season follows the same formula. The first season puts the Umbrella Academy on their heels as they have to put aside their differences (and their mountain of familial angst) to band together and stop the impending apocalypse. The second season features the Umbrellas as they must come together, hash out their grievances, and prevent another apocalypse. And now, we have Season 3, which features the Umbrella Academy heroes having to come together and stop their infighting to—you guessed it—save the world from the apocalypse. Despite having some of the most interesting superheroes ever shown on screen and subplots about identity and family that are incredibly timely for 2022, this is a show that feels like it’s quickly running out of ideas.

After saving the world from the apocalypse two separate times in the span of almost three weeks, the Umbrella Academy is done with time travel and is back in the present timeline where everything should be great. However, in the first episode of Season 3, we quickly learn that time travel has “Back to the Future”-style consequences, as the Umbrellas return to a present that is very different. In this new timeline, they don’t exist and instead, the Sparrow Academy has taken their place. And these Sparrows, well, they’re entitled assholes. The Umbrellas and the Sparrows trade words, are generally confused by each other, and eventually, fight. It’s all great fun for the viewers as we get to see the Umbrella Academy use its powers in very superhero-y ways, which doesn’t happen often. And they have never faced off against other superpowered beings. It’s exciting stuff. Well, until it isn’t anymore.

You see, it only takes a few episodes for “The Umbrella Academy” to zig when you desperately want it to zag. The interesting alternate universe shenanigans with the Sparrows are upended by the return of a dangling plot thread from Season 2, and yes, yet another world-ending apocalypse that must be stopped. “The Umbrella Academy” quickly devolves into another riff on the “siblings infighting while they must save the world” schtick that we have seen in the first two seasons. And it really is a shame, as the first three or four episodes of Season 3 hint at what could have been the best season yet. Instead, Season 3 ends up being the most forgettable.

Before the apocalyptic story takes Season 3 by the throat, the first several episodes are great. Without a place in this new world, the Umbrella Academy goes their separate ways in disparate storylines about identity. Klaus (Robert Sheehan), who has a large portion of his time in the show being the resident drunk, drug-addicted screw-up, goes in search of his family and larger meaning in his life. Victor (David Castañeda) reconnects with Lila (Ritu Arya) and finds out he might be a dad. And easily the most intriguing identity subplot comes from Viktor (Elliot Page), who comes out as a trans man and has numerous scenes where he answers questions and explains his transition in a way that is handled with grace and honesty. The scenes with Viktor talking with his siblings in the first few episodes have so much heart and joy, you just want to see that echo throughout the rest of the season. Sadly, these various threads are dismissed in the second half of Season 3, as yet another convoluted end-of-the-world plot unfurls and you begin to hear the word Kugelblitz way, way too many times.

It truly boggles the mind how a series featuring superheroes as strange and unique as “The Umbrella Academy” can’t figure out how to create stories worthy of this offbeat cast of characters. Sure, the fact that this is the third apocalypse they have to stop in three weeks is the butt of self-aware jokes in the series, but that doesn’t change how viewers are going to feel seeing the same beats play out again and again. And without going into spoilers, the setup of the Sparrow Academy, which is such a fun part of the first three episodes, is almost entirely thrown out of the window in favor of just more daddy issues and defacto group therapy scenes between the siblings. The series relies too much on the change of scenery to make this all feel new and important. Season 2 took the characters back in time to the ‘60s. That was a fun diversion, as it dealt with social issues and forced the Umbrellas to grow out of their childish ways. Season 3 puts them in an alternate present, which is supposed to be yet another shock to the system and make the show feel fresh, but the gimmick is already stale and it feels like a storytelling crutch more than anything else.

And it wouldn’t be so bad if the actual “saving the world” aspect wasn’t so bland. The idea of a black hole swallowing up the entire universe is a visual delight in most instances. However, the series never takes a step back to show how the greater world is reacting to the apocalypse. We are given brief hints early on, but as buildings fall and the sky turns an ominous red, the rest of the world takes a backseat as “The Umbrella Academy” takes place almost entirely in a hotel. This is the most apocalyptic-y apocalypse ever, but it carries no real weight. Then when you find out what has to be done to save the universe, it just feels very underwhelming. Samurais, really?

Sadly, by the end of Season 3, we aren’t given any indication that this formula is going to change for Season 4. In fact, the setup for the future actually seems like it could be the worst yet, which is terribly disheartening for a show that has shown moments of innovation in the past.

Ultimately, Season 3 of “The Umbrella Academy” spoils a really fun premise in favor of another trip to the end of the world. For a show featuring an openly trans hero, a drunk who communicates with the dead, a time-traveling senior citizen in the body of a 15-year-old, a half-man/half-ape with a heart of gold, and various other colorful characters, this is a show scared to really break new ground and relies on the illusion of change. On to the next apocalypse.