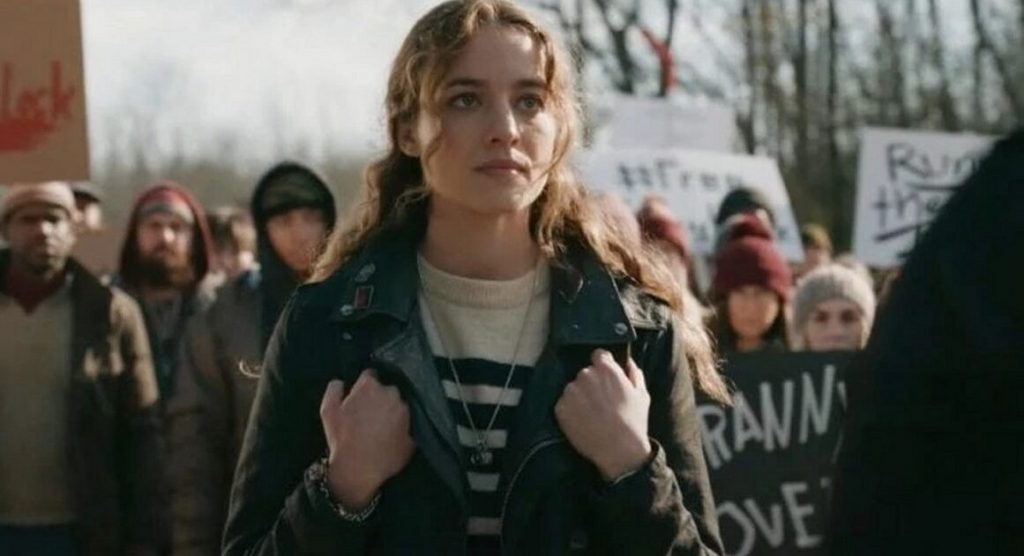 Created only in 2006, The CW is America’s youngest broadcast network, and a lot of its audience (target demo: women ages 13 to 34) isn’t much older. It’s the sort of network where you’re much more likely to see potential Pussycat Dolls than Lysander Spooner wannabes. And yet there it is: The Republic of Sarah, the new CW drama in which a mob of hardbody high-school kids and their state-smashing history teacher stage an anarchist revolt, secede from the United States, and make out a lot, too, which I’m sure Spooner would have agreed was a righteous blow against the state.

You think I’m exaggerating, and perhaps I am, just a bit. (Spooner didn’t think hookers should go to jail, but I’m not sure he had an official position on French-kissing.) But The Republic of Sarah is the most deliriously goofy TV political mashup since a soon-to-be-vanished Brit satellite channel aired a sitcom called Heil, Honey, I’m Home! about you-know-who.

Stella Baker (Tell Me Your Secrets) plays Sarah Cooper, an instructor in cute-as-a-rustic-button Greylock, New Hampshire. She’s right in the middle of teaching a unit on the Revolutionary War when a mining company rolls into town after striking valuable coltan ore nearby. (If you remember that coltan is what some of the robots in the Terminator movies were made of, your damage is beyond anything we can do for you here. Seek help immediately.)

What the townfolk lack in intelligence—”You don’t have to dumb yourself down to fit in,” Cooper counsels a kid transferring from Los Angeles—they make up for in belligerence. “We don’t need a bunch of flatlanders taking over!” one of them shouts at the miners before they’ve actually done so much as a blow a leaf in the air.

But, like the four-flushing, mustachioed villains of dinner-theater melodrama, the corporate stormtroopers live down to expectations. Naturally the first thing they do is crush a quaint pagoda in the town square because, as everybody knows, there’s a lot of profit in pagoda-crushing. And Cooper, still stirred from by her Revolutionary War lesson plans, decides they must be stopped before they declare war on park benches, flower boxes, and playful kittens.

First she tries standing in front of company bulldozers as if she’s in Tiananmen Square. Then she hits on a cartographic loophole in the Constitution: A river changed course while Canada and the United States were mapping the border, and nobody bothered to correct the discrepancy. And the town of Greylock sits squarely in the unclaimed parcel of riverside land. Secession! No gods, no masters! Taxation is theft! Cute girls for everyone!

My first impression of the pilot episode of The Republic of Sarah was that it was written by screenwriters oblivious even by Hollywood’s generous standards: nothing about the Border Patrol encircling Greylock and arresting illegal immigrants crossing the border to their jobs in other towns; nothing about punitive U.S. tariffs on maple syrup or whatever else Greylock—which, after all, is not a signatory to NAFTA—might have to export; nothing about Maine, Massachusetts, and Vermont joining NATO to protect themselves from their bellicose new neighbor. And then there’s the small matter of 18 U.S. Code § 2385, which takes a dim view of overthrowing the United States government.

To my frank amazement, a lot of these issues actually are addressed in later episodes. (Well, not the point about NATO, but I only watched three hours.) And, for a moment, I thought The Republic of Sarah‘s writer-producer Jeffrey Paul King (the creative wrangler of CBS’ modern-Sherlock Holmes drama Elementary) might be offering up some serious political commentary. No spoilers, but I half-expected the musical score of the second episode to feature The Who screaming, “Meet the new boss, same as the old boss…“

Alas, what I mistook for incipient coherence was mere creative flatulence. Whenever serious ideological disputes come up in The Republic of Sarah, they’re resolved in favor of the heroine on the grounds of her sheer moral authority. Along with the old order, logic has been dissolved; Cooper and the kids believe in the sanctity of borders when used to protect them from the rapacious corporation, but dismiss them as irrelevant “lines drawn on a map” when they pose a threat. Most interestingly, in these days of ascendent anti-racism, there’s not a word about the moral or legal validity of secession when it’s mounted in support of something more yucky than corporation-bashing—say, slavery.  The Republic of Sarah treats ideas as fashion accessories. And anybody who remembers bellbottoms or saddle shoes knows what happens to those.